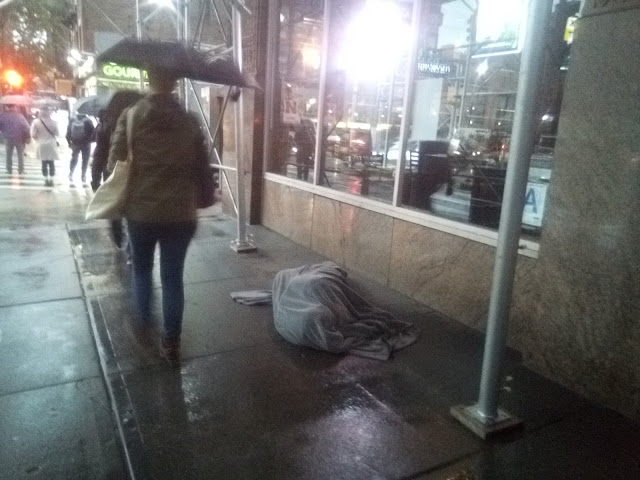 More homeless New Yorkers died last year than in any other in the past decade — despite promises by Mayor Bill de Blasio to make their lives better.

Homeless deaths from July 2018 through June 2019 totaled 404 — a staggering 39% increase from the previous fiscal year and the highest number since 2006, when the city began recording the deaths.
Sixty percent died in a hospital. The rest died outdoors or in other places that the city didn’t specify in its annual report, which is mandated by law.

Even with the deaths, the homeless population spiked in fiscal 2019 — reaching an all-time high in shelters of 63,839 in last January, according to the Coalition for the Homeless.

The number of homeless has climbed nearly every year since the de Blasio took office, and spending on city homeless services has more than doubled.

This, despite the mayor’s repeated promises to “turn the tide” on homelessness.

“An ever-growing homeless population is unacceptable to the future of New York City . . . it will not happen under our watch,” de Blasio said days before his swearing-in on Jan. 1, 2014.
In response to the skyrocketing number of deaths, a coalition spokeswoman called on the state and the city to provide more affordable housing.

“No person should have to live — or die — without stable housing,” Jacquelyn Simone said. “This report should serve as a tragic reminder why Mayor de Blasio and Governor Cuomo must both step up with housing solutions at a scale to meet the need.”

Build free housing in the old Flushing airport,the city could build hundreds of housing projects,20 stories high or use the soon to be vacated Riker Island,problem solved,will it kill the value of housing in North East Queens,yes,but think of what it accomplishes,plus you have the police academy right there for their safty.

Park Slope would be a much better location for Housing Projects.
@ #1Anon They are not "Free" it's comes from hard working tax payers !

Didn’t some deranged homeless guy knock off 4 of them last year? That’s has to skew the percentages. .

I have seen the same homeless people that sleep outdoors for years and don't know how they can survive.There's an 83 year old man on Grand Ave.in Maspeth that lives on the streets and at night goes on the bus, been doing this for years.He has horror stories about shelters and won't except charity. He doesn't do drugs and is not a drunk, I wish someone could help him.

One of the richest cities in the world and no will to create an outta sight, outta mind facility with appropriate mental health faculties and boarding program to put the good among them on track to productivity (or at least, harmless-ness).

Jack Kemp’s HUD found homelessness was caused by deinstitutionalization, zoning and rent control. It all started with Jimmy Carter, whose sister-in-law was institutionalized and he felt that was bad, so they let them out. Mario Cuomo pushed it heavily because he wanted us to feel guilty over Reagan’s tax cuts. . Calling them homeless loses half the battle rhetorically – they lack sanity not homes. Homeless predominantly suffer from schizophrenic hallucinations, some genetic, some cause by disease, other brain burnt from drugs. Meds may help them, but if they accidentally fall off their meds, the wander. So implant an RFID tag on them as well as a clozapene infusion pump. During the plague, unemployment became a crime, because of dearth of workers, thereafter vagabonds were prosecuted and indentured, which is why drunks were scooped off city streets and shipped to America and Australia. Now, we should send them to colonize Mars.