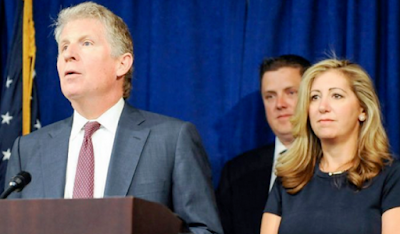 
The head of the Manhattan District Attorney Cy Vance Jr.’s vaunted Construction Fraud Task Force left her post this week after allegations surfaced that she withheld damaging evidence about a key cooperating witness in seven major bribery cases, THE CITY has learned.

He appointed her “attorney-in-charge” of the task force when he formed it in August 2015 to crack down on wrongdoing in the industry.

Florence stepped down Tuesday shortly after allegations emerged in court papers that she kept secret a 38-minute audiotape in which the key informant in a series of construction bribery cases denied under oath to city investigators that he’d accepted any bribes.

Ifeanyi “Manny” Madu, a former city Department of Environmental Protection manager who was involved in picking vendors, was Florence’s star witness in cases she prosecuted against several contractors who’d received millions of dollars in city work.

Madu cooperated with the DA and claimed that in exchange for steering work to favored vendors, he received bribes of hotel stays, Broadway show tickets, gifts, extravagant meals and work for a subcontractor he secretly controlled.

He was the sole cooperating witness in seven criminal cases that were announced at an April 2018 news conference in which Florence stood next to Vance.

Unknown to the defendants, on Feb. 13, 2015, Madu made an audiotaped statement to city
Department of Investigation agents involved in the bribery case, during which he was placed under oath.

According to court papers reviewed by THE CITY, Madu told DOI “among other things that he broke no laws, and that he did not take gifts, things of value or bribes from contractors.”

In court papers, Florence denied deliberately withholding evidence in the bribery cases, but did not address the allegation regarding the Madu DOI tape. She did not immediately return a phone message from THE CITY.

The allegations threatened to unleash a stampede to throw out cases and convictions involving Madu and Florence.

The accusations also marked the latest strife for Vance, who faces calls for his resignation over his handling of some high-profile cases involving the likes of Harvey Weinstein, Jeffrey Epstein and family members of President Donald Trump.

No. She did not, she couldn't. She is honest. She represents the law.
Payola bitch.

Call in the Feds and Lock Her Up !

Vance is the root cause of this. He is as corrupt as it gets. Just like dad.