Surely by now you all have heard about the controversial remarks that Brooklyn Borough President Eric Adams made on MLK Day about wealthy white transplants. If not, here's a summary: 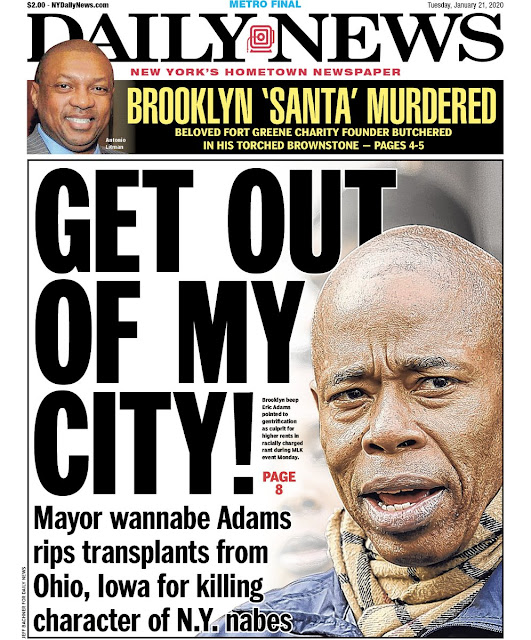 Now, of course, Adams was going to feel blowback from this, and it has gone on for a week now. But for the wrong reason! As my friend Miss Heather succinctly pointed out: 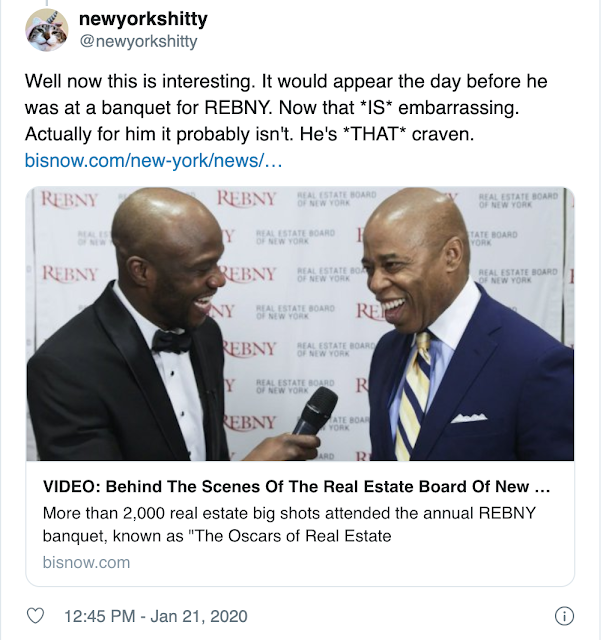 Now THIS is what the media should have been focusing on in their criticism. Instead, they tried to make the issue about foreign immigration and people coming here for work, which is not who Adams was talking about. We have all been affected by the latest trend of prom queens and bros that have infiltrated NYC and turned it into chain store heaven. These folks leave lily-white suburbs and come here to remake NYC into an urban version of what is familiar to them, and do it with general disdain for the people who were born and raised here. They don't contribute anything to the city's culture except upzonings, gentrification, virtue signaling politics and shitty, overpriced pizza.

So why has the media gone so apeshit over Adams' comments? Well, if you recall, back in 2009, the newspapers were tripping over themselves to endorse - for money - billionaire media mogul Michael Bloomberg for a third mayoral term, aka the grand wizard of forced gentrification and pimp daddy of corporate welfare for real estate companies. So the reaction from the press now is pure defense. They helped gentrify this city with not only this, but by framing any and all opposition as kooks standing in the way of progress and basically printing developer press releases word for word. Can't piss off your advertisers!

Check out this "rebuttal" opinion piece in today's Daily News:


I loved my childhood here but also see again reflected in my kids’ eyes what a profoundly unnatural place it is to grow up in. It’s a way station for people and money coming in or out of America, and everyone building a life in the midst of the tumult and transit and trade knows it.

Hmm. It may be a way station for some people. But everyone reading this knows scores of native New Yorkers who don't feel this way. If this reflects the media's opinion of NYC, then it's no wonder they cover it the way they do, like everything politicians propose is inevitable. Sad. Just sad.

Yes, Adams deserves criticism for his remarks because of his hypocrisy, but the media deserves the same. And that's a big reason why this blog and others, like Jeremiah's Vanishing New York, exist. - QC


And mine too,
JQ LLC ,Impunity City
Posted by Queens Crapper at 8:11 AM

Adams' geography was lacking. He could have said as well: "Go back to the Gulf States and East Asia."

It also may be why there actually hasn't been much blowback from Adams bogus screed, especially from de Blaz.

Those rumors of the mayor pushing his wife to be BP in exchange for Adams mayoral ambitions looks to be solidified now. Plus the fact that the current Dem leader who replaced Seddio was one of the only elected officials to endorse the stupid fucking idiots presidential campaign. Throw in Berlin Rosen, the lobby firm who worked on de Blasio's mayoral campaign and sat on in City Hall meetings as an agent of a city, coming on board taking said new Brooklyn Dem leader as a client too.

Lots of horsetrading going on with the Brooklyn Machine.

Is this another, "In Your Face!" NYC Black Racist? Should be a shoe-in for Mayor!

He's revving up his base and getting them pumped up for his mayoral run.

I truly wonder who's going to be the lesser evil in the mayoral race...

The people who you can blame the most are foreign investors and big businesses for making NYC suck. These are people who but up property here and never even set foot in NYC at all. So these foreigners and owners of the Big business chains have no clue what NYC residents need or want. We dont need anymore mcmansions that house five foreign families, we don't need a hundred banks in a 5 block span. We dont need 50 drug stores on one block. We dont need luxury apartments that nobody can afford. We need fairer housing practices to the citizens who have lived here already by giving us choices of buying property over foreign money. We need more affordable apartment complexes in nice areas where people actually want to live. We need population control in NYC. We need so many things that doesnt include banks, Cvs, luxury apartments. Also, you can blame jayz for the Barclay's center as well who is from Brooklyn. The fact is that the white population in NYC is at the smallest its ever been in history. Only 42 percent of NYC is white and the other 58 percent are all other races. The only reason hes pointing out people from Ohio and iowa is because the man who originally bought the Barclays center was from Ohio developer company. But jayz also had something to do with this. So start looking at your demographics first before you start blaming white people from out of state for making NYC suck and being unaffordable.

This almost sounds like a rant against white people from Ohio and Iowa coming to NYC but there are blacks in those states, right? He also could have mentioned about all the illegals that are in the city overburdening our schools, hospitals, housing and taking jobs away from the black community.
All those Democrat politicians were there to commemorate MLK and just sat there smiling and kissing Sharpton's backside, while MLK is rolling over in his grave.

Angry old man,get off my grass...

If this overt "In Your Face" black racist becomes mayor, that's the end of NYC. Ditto the clueless Chirlane of no particular qualification or talent. NYC is already being offered up as fresh meat for any criminal to prey upon by another "In Your Face" black racist, NY Assembly Speaker Carl Heastie. He refuses to rescind the law making NY the laughing stock of the nation, letting criminals bounce right out of the station after being arrested, with no bail. Even after numerous criminals went and committed the same crime the very next day, some of them quite serious. His stupid reason was that he felt that having to pay bail was unfair to poor black folk, who might not be able to pay it. Why then, don't commit the crime and you won't have to pay anything, you cretin! An entire state is being held hostage by one black racist. Will no one exhibit the merest bit of common sense and step up to rescind this dangerously stupid law?

I live in another state, but am an avid reader of Queens Crap. I noticed that an out of state (Illinois) black family has just moved into the neighborhood. I wouldn't consider making the outrageous comments, much less advocating their removal, because they are black and from a liberal and failing state. Has black racism taken over NYC?

There is a lot shady solidarity shit going on with this city's establishment Democrats.

“has black racism taken over NYC”

The short answer is yes

Wonder if they'll pickup on this. Adams like most politicians is a giant hypocrite.

And my folks and I have built a life here, as has some of our extended family. It's not a waystation to us.

Sorry Tommy, but your progressive liberal friends are turning this wonderful city into a slave-surf plantation for the powers to be.
I agree with you...just sayin.

Not just a giant hypocrite Tommy, but a defiant hypocrite. Instead of yearning to lead the city in an honest, ethical way, he is mimicking de Blasio with his duplicitous stands and also his shady fundraising too.

That gentrifier screed was a crock.

My big take away from this, people from Ohio and Iowa are moving to one of the most expensive, crowded and shittiest cities in the country. As a former NYC'er who came from elsewhere, I have to WAY and DON'T, you will regret it. This is the worst time to move to NYC, maybe a couple of decades ago, but not now. And with a dwindling middle class, the tax base will shrink, many more crappy services, etc.

A few reasons, NYC became a mess of gentrification (and other cities):

1. Federal Government beginning with Reagan, stop funding cities, letting many fall apart and then relying on the mega rich to move in and fix things up with taxes.

3. And most importantly, corrupt shady politicians (many who call themselves "liberal) and gave the go ahead for mass destruction of the middle class. NONE of this crap could not happen with politicians signing off on everything. They get the most blame. Foreign investors already exploited what all the above put in place.

1. Federal Government beginning with Reagan, stop funding cities, letting many fall apart and then relying on the mega rich to move in and fix things up with taxes.

Excuse me, but with all the taxes, fees, fines, tolls, etc, where is the money going? Did anyone ever see accounting that addresses every last penny? NO

Why is the Federal Governments problem if asshole liberals tax me $9000 for a 110'x40' lot with a house on it? Plus everything else. Sorry this doesn't sound right. LOCALLY is fucked up.

You local yokels have to take responsibility for your own mess. Stop always blaming the federal government, republicans, people from other states, etc. You continually elect tax and spend liberal democrats, like yourselves, and invite ILLEGAL immigrants from impoverished, America hating, nations from around the world. And then you can't understand what you've done wrong. Idiots! I didn't say it, Einstein said it!

"These folks leave lily-white suburbs and come here to remake NYC into an urban version of what is familiar to them, and do it with general disdain for the people who were born and raised here. They don't contribute anything to the city's culture except upzonings, gentrification, virtue signaling politics and shitty, overpriced pizza."
-

White people from Ohio and Iowa ?
My sons school is completely over run with anchor babies from illegal Latinos. In his class there is only one other white kid and three black kids, the rest are spanish. So much so that the entire school is an english second language curriculum. How is this fair? Of course New York City is a "sanctuary city". It makes me sick.