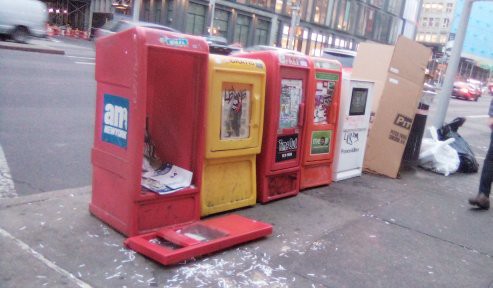 Freebie daily paper Metro Boston folded Wednesday while the ex-staffers of Metros in Boston, Philadelphia and New York learned this week they’re getting no severance whatsoever from their now-former employer.
Two of the papers — Metro New York and Metro Philadelphia — were sold last week to Schneps Media, which is keeping the Philly paper alive while merging the Gotham edition into amNewYork, which it already owns.
The new NY paper was renamed amNewYork Metro for the Jan. 6 edition.
Staffers at all three Metro publications were laid off on Jan. 3 by owner Metro US — only to learn this week they are getting stiffed on severance.
“I found out that I was out of a job by a two-sentence email this past Friday,” lamented a former Metro employee who worked there eight years. “I was expecting severance pay due … but when I got my separation letter from the company, it said I was getting a grand total of $0 in severance.”
Newsday, the former owner of amNewYork, laid off all its workers as well prior to its sale to Schneps. But it at least gave staffers three weeks’ severance for each year of work when the freebie daily was sold in October.
Only three staffers were offered jobs with the new owner. Schneps said this time it expects to make job offers to about 20 former staffers of the Metro papers it purchased.

Earlier this month, Schneps Media announced that it had acquired Metro New York, the city's long-running freebie newspaper, along with its counterparts in Philadelphia and Boston. It was the latest in a string of purchases for the emerging local news behemoth, which recently snapped up amNewYork, then promptly gutted nearly the entire staff.

As of this week, the two ubiquitous subway papers—once competitors—have now been bundled into a single print product, dubbed amNewYork Metro. Two former editorial staffers from Metro, and none from the pre-Schneps amNewYork, remain employed at the new title. Daily content comes from both dedicated employees and stories published on Schneps' network of other hyperlocal sites, including its flagship Queens Courier, and other fairly recent additions to its portfolio like Brooklyn Paper, Downtown Express, the Bronx Times, and The Villager.

In contrast to the amNewYork acquisition, employees at Metro say they were informed this week that they will not receive any severance pay. Adding to their frustration, staffers said, they were told immediately following the sale that their jobs were likely safe.

"They completely misled us," said one employee, who asked for anonymity so they could speak freely.

"To be working there for as long as a lot of us had—some people for nearly a decade—and to be treated with this level of disrespect is so unjustified and sickening."

Metro publishers Ed Abrams and Susan Peiffer did not respond to a request for comment. The owners announced just prior to the sale that Metro Boston would cease publishing after nearly two decades, while Metro Philadelphia will continue publishing under Schneps ownership.

“This is an exciting next step for our entire organization offering a unique opportunity to strengthen our position in the daily newspaper market and increase our readership to over 2.5 million readers in print each week and many more online,” Schneps Media CEO Joshua Schneps, a former investment banker who runs the publisher with his mother, Victoria Schneps-Yunis, said in a statement.

Exciting enough to hoard people's hard earned money for oneself too Josh. Yeesh.
Posted by JQ LLC at 6:42 AM