I have been involved and against the Flushing Meadows Park theft for several years. I am a founding member of Save Flushing Meadows Corona Park, I was featured on a radio call in show and in a video against the theft, I was a litigant alongside senator Avella and several other community activists in a winning lawsuit.

So you can imagine my disappointment when knowing, what I know about this park, and knowing that the Wilpons, and the USTA, make millions of dollars a year off of our parkland! I see the fields in this condition.

This is “field 6”. There are a few other fields in the same condition. This is appalling. Where is all the money going? We as a community deserve better, we expect better, we demand better. 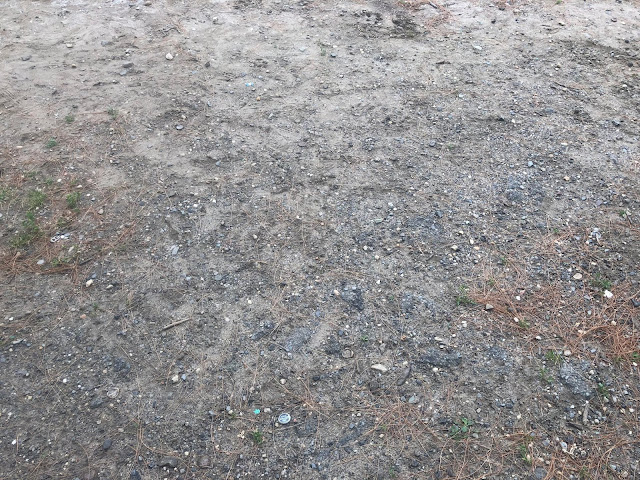 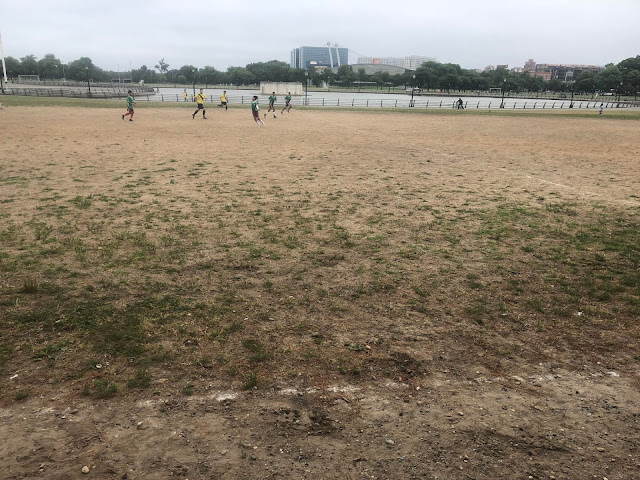 Alfredo Centola
Community Activist
Posted by Queens Crapper at 12:33 AM

The teams that use the fields abuse them and should be made to pay to maintain them. They are using cleats which is prohibited .

my kids' soccer class practices on the field at queens college and it doesn't look like that. the fhyaa fields in forest hills look nice. reason being that money is paid to take care of them and someone does. just like a lot of money is spent on central park.

Bravo Al Centola!
BUT this is seen as a ghetto park. The higher ups don't care. They are inactivists!

DIBLASSIOS failed Robin Hood philosophy of taking more money from central park and sharing it to help fix the rest of the city's parks has failed time and time again !! FMCP needs its own conservation fund. We have plenty or well to do folks in this borough so why not reach out to them to help fund the desperate maintenance that this once historic park needs. If that doesn't work then get the money from the freaking annual budget. We have two airports, a baseaball stadium, casino, race track. I'm sure we can collect enough in taxes from the revenue that they alone provide.

What about the lake though. it fucking stinks. I know smelled raw sewage when i was last there. SHAMEFUL

Yeah! And Central Park was once a swamp and a ghetto before someone, someone like Centola took an interest and made the jewel of Manhattan. There always has to be someone to take the initiative to do things better or they just won't happen. Remember is was Centola who drove Mike Bloomberg and pro-soccer group out taking over that public land to make money for themselves.

Thanks A.C. for your commitment to Queens and our parks.

This is a flaw in our Parks Dept. They don't do much better in Bayside. There are many areas in this part of Queens where trees, grass and shrubs are over grown every year and Parks is not on the job. I've seen them "trim back" over growth at 26th Avenue and the Clearview Expressway after its so over grown you practically have to walk in the street to avoid the branches and over grown brush that grows through the fencing on to the sidewalk. I've seen them use the equivalent of household scissors and the craggiest lawn edger I've ever seen to do the work and they don't trim it out evenly they just chop at it aand they don't even discard the cutting, they just leave it !

Its criminal that Parks gets paid to "properly maintain" our parks, trees and brush along our streets and highways but they fail at ever instance.

It comes down to blatant laziness and a don't care attitude - just show up and collect a paycheck.

Read Up on WHO took on Central Parks creation, dummy. It wasn't a community activist alone.
BTW....a Queens native, Paulson , gave 100 million bucks to the Central Park Conservancy thinking it was more deserving than Queens FMCP! Money talks and bullshit walks.
Nevertheless, kudos to Al Centola for rocking the boat.

High crime FMCP is what it is....SHIT!
Eventually most of it will become a sports complex like it ir not.

Forest Park is Queens premiere park. FMCP is just a former garbage dump and left over fair grounds.Fi you think that NUC is going to flush major money down the toilet to improve it? Sadly, NO!

"I know smelled raw sewage when i was last there"

Because it IS raw sewage !
The homeless use that area by the creek as a toilet.
Go to the Westinghouse time capsule and notice all stains on the stone benches. Its a mix of vomit, urine and raw feces from the bums crapping themselves wile passed out.

I posted this here years ago, I ride my bike in that park and asked cops I saw turning a blind eye to it why?
Reply: "they are contained and have rights and can yell and talk to squirrels all they want" "as long as we dont see them placing anybody in danger we must lay off because the mayor does not want them causing problems elsewhere"

I assume "elsewhere" means Manhattan and "contained" means its their given sanctuary.

It can't cost that much to plant grass on a field. But the city is more concerned with monopolizing parkspace for events than taking care of it's infrastructure. And are blatantly discriminatory when it comes to renovating bathrooms.

Those photos are of the parking lot for the US Open.Does anyone hear anything that the Flushing Meadow Park Conservancy has done in the park?It could be so much nicer but it's always the same story no funds to save the Aquacade,restore the creek through the park,more sound barriers and trees to block out all the highways that surround and bisect the park and how about a way to connect Willow Lake to the rest of the park.With all the bike lanes the city have made you think a park would have one but bikers have no lanes or signs and have to share the road with cars all the time and especially at Met's games and US Open and other big events.The city spent millions on the Promenade and never even made a crosswalk or a curb cut or a bike lane to get there.With all the events going on in this park you think some of the millions being made would wind up improving the park.

Does the person complaining want rolling green fields? Does anyone know what type of maintenance is required to have healthy, green grass? Will people respect it, will the people that use it take responsibility for it? Once it looks great, do we section it off and not allow public sports from tearing it up?

Sure, what a dream it would be to have beautiful green fields for individuals to sit and take sun, read a book, have a small 2,3 or 4 person picnic there. Imagine FMCP being a place that upstanding members of society will flock too?

I used to walk through there as a kid to ice skate and play touch football year round, that was 35-40 years ago and it was pretty much the same, just different folks.

As a taxpayer, it's a choice, beautiful green fields sectioned off (no damaging sports played there) or let people rip up the dirt as much as they'd like with soccer games or anything else that would otherwise damage a nice grass field.

True. Paulson did give $100 million - in 2012 - I was going back away's. Back when it was first developed in the 19th Century. Didn't mean to throw you off your game. But I agree that Al Centola has been right on target with FMCP.

On target? So where are the results?
Good intentions don't mean success.
Sorry folks. But I applaud Al anyway.
Good man.

Even the artificial fields that cost us $$$millions, aren't being maintained by Parks Dept! What does Parks do anyway?

You're missing the point. FMCP is viewed as immigrant Latino turf. Why spend money on them? Not until a more "upscale" group replaces them. Until the surrounding area is gentrified, it shall remain as is. Open your eyes to the real plot.

Sounds more like brain theft. Wake up man!
Somebody stole your gray cells. WTF are you fighting for....table scraps the dog won't eat? This is a shit hole adjacent to a junk yard and surrounded by crap!

The park is dead horse. It's what it is. Stop beating it.

Why should Parks Dept. Care? They fix and groom and the next day a herd of cattle run through it.
That's not my view but I'm sure it's their's.

this isn't just FMCP and don't act like every city park hasn't fallen into diarray and disrepair. when i was growing up i played baseball at almost all the city parks in queens (couldn't play at the home field of the College Point Little League because Avella had sold out to allow illegal dumping to destroy the site) and every file looked like this. the outfields were torn up, with rocks, glass and so much other crap.

the city doesn't care about maintaining ANY park. deal with it. and accept it.