Charter changes up for discussion 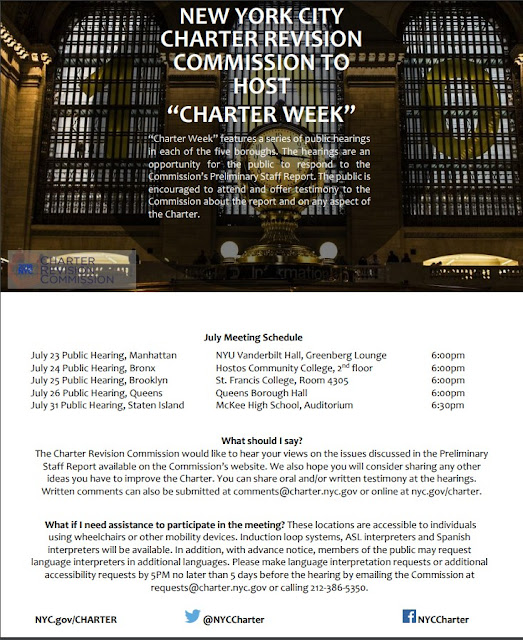 This is to let you know that the city's Charter Review Commission is having a series of meetings in the boroughs next week, Queens' turn is Thursday evening, July 26 at Queens Borough Hall. The Charter is basically New York City's "constitution" that lays out the broad parameters for administration and operation of the city. Please see the attached flyer for additional information. - Jessica Douglas, Queens Borough Director of the Mayor's Community Affairs office

Community Boards:
1) Whether to place term limits for Community Board members as a method to encourage diversity.
2) How to Standardize and enhance the existing appointment process
3) Provide additional support in resources; particularly as it relates to urban planning
4) Things to adopt methods to ensure Community Boards are representative of the community they serve.

Campaign Finance:
1) The Reduction of spending limits (no amounts provided).
2) Increasing the public match ( no ratio provided).
3) Look into the timeline for implementation given that candidates are raising money under the current system.

Elections
1) Language accessibility ( providing interpreters, translation of ballots and materials, and community advisory groups)
2) Instant Runoff Voting - Look to implement within local primary elections and for citywide elections (where runoffs is provided) or to extend to all offices (Borough Presidents and City Council offices)

Redistricting for City Council Seats
1) In light of the lack of DOJ oversight, solicit testimony from experts and affected communities about the effects of districting process on racial and ethnic minorities and their voting power.
2) Look at altering the Districting Commission to promote independence, including the appointment process.
3) Studying whether there are ways to counteract effects of an undercount in the next census.
Posted by Queens Crapper at 12:00 AM

6 p.m. is way too early for most of the citizenry to show up.

If DumBlasio's administration is for these changes, count me as agin them. I.m not for pouring more public money into idiot third world City Council candidates. Community Boards are far from perfect but term limits, especially in Queens is nothing more than a fancy way to say "get all those white people off" and fill them up with third worlders. Gerrymandering to create districts that benefit one party over another is wrong and bad enough. Now he wants to gerrymander so every ethnic enclave gets a district, just as wrong. Fuggedabout his Community Engagement ideas, that just amounts to how can he get around having to deal with real community leaders in the boroughs by doing phony top down gatherings such as all the "stake holder" ones agencies like DOT have been holding on bus routes and bike lanes. What we got now ain't perfect, but letting these guys tinker with it will just make it worse, sure won't fix it.

Nothing of significance except instant run-offs. That could tip a lot of primaries.

Perhaps the Charter Commission should adopt a provision for providing interpreters not only for voters but for future city council members considering many won't be able to communicate in the English language.

It'll al wind up benefiting. REBNY and the socialist/liberal interests of NYC.

Spend, spend, spend. That is all these parasites can do.

Increase public matching funds is a way to implement finance reform? Are they kidding? That is the easiest way to pad your income. You get someone to give you $1000. The state matches it with $4000. You give a consulting fee or stipend or some other contribution to the original person for $1500. They have a 50% return on their money and you have $3500 of free money.

How about some things that cut the cost or decrease spending? Of course not.

Wish they had put this information out earlier.

Can we, the people, vote Yay or Nay on this, or it will just like the dedicated bikelanes/community boards thing?

Went to that hearing. Most of the speakers in favor of term limiting Community Bds were either newer members of boards who found out they aren't on there to push their own personal agendas but rather the entire community's agenda or folks that want to get on a bd to push their personal agenda like the Transportation Alternatives people who are miffed that there are people who don't think their ideas are as wonderful as they do.

Was at the hearing too, was surprised that vast majority of the comments were about Community Board term limits, and not more pressing issues like Ranked Choice voting.