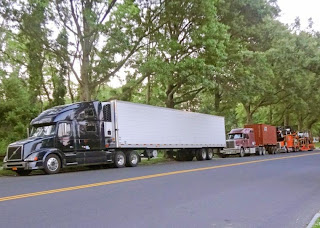 The Queens delegation to the City Council wants to ratchet up the economic pressure on commercial truck drivers who illegally park their rigs on the borough’s streets.

Three large trucks, including a pair of 18-wheelers, served as an unwitting backdrop on Springfield Boulevard in Cambria Heights last Friday as Councilman Daneek Miller (D-St. Albans) announced a pair of bills that have been introduced in the Council to try and rein in the big rigs.

The press conference, held one day after the Council passed a bill that significantly increases fines for everything from illegal dumping to throwing trash from a car window, was billed as a quality-of-life statement by Miller, Councilwoman Adrienne Adams (D-Jamaica) and Councilman Costa Constantinides (D-Astoria), chairman of the Committee on the Environment.

Their location on Friday, at the intersection with 121st Avenue, was no accident.

“There are a few trucks here now, but come here after 4 p.m., especially on Friday and the weekend,” he said, “you could have 20 trucks parked along this road. And they keep the motors running because they’re in the cabs and then need air conditioning in the summer and heat in the winter.”

Not to mention the taking of on-street parking, and, Adams said, the danger of having to walk on sidewalks behind large trucks, largely obscured from view, giving cover to potential muggers and attackers.

Intro. 1011, the Commercial Truck Abuse Reduction Act, would cut the time that a tractor-trailer combination, truck or semi trailer can be parked in half, to 90 minutes from the existing limit of three hours.

BUT why wasn't the increase in fines done a LONG TIME AGO, since this has been a problem for decades that even Councilman Miller's predecessor, Senator Leroy Comrie (three term do nothing council member) and his predecessor, Archie Spigner (the same), knew about when they was in office (that is a total of over 30 years).

AND why keep creating new council bills when LAWS are already on the books. As usual the BIG PROBLEM is enforcement of laws from city agencies from NYPD to DOB. AND then giving lame reasons, why they are NOT ENFORCED.

One has to ask, WHY isn't NYPD enforcing those laws or other laws like illegal fire works in the SE Queens area that start before July 4th all through the summer at all hours of the day.. Why are other laws such as littering, illegal garbage dumping, illegal truck driving on residential streets, illegal curb cuts, illegal conversions and a whole host of other quality of life issues constantly either IGNORED and/or NOT ENFORCED.

Leroy Gadsden, president of the Jamaica Branch of the NAACP stated in this article:

NO MISTER GADSEN, you, Miller, Spigner, Comrie, Katz, deBlasio and all the past and present elected officials placed MONEY over the health and safety of your neighborhoods and constituencies that YOU were supposed to serve and who pay your unjustified salaries.

I mean this issue is nothing new and has been reported by news media, blogs like Queens Crap and Clean Up Jamaica Queens for YEARS and none of you took any type of stand, any type of action, you all sat idly by while so much damage to neighborhoods and people's health took place and the situation became so problematic and unmanageable.

AND if you all were so concerned, why did you allow a major polluting, poisonous and very questionable company, like Royal Waste, plop their HUGE garbage dump right in the middle of thousands of homes and families and right across the street from a big park, Detective Keith Williams Park. They are THE BIGGEST reason for all these trucks and all this pollution causing asthma and cancer.

So KATZ, is this what you mean when you ALWAYS say, "What good is for Queens is good for families" AND deBlasio, a TRUE progressive liberal, would never allow this to happen and if it was happening, would IMMEDIATELY rectify the situation, which you have NOT, because YOU sir are not a progressive liberal, only on paper, NOT in action.

As usual, another article on the same issues that have been plaguing communities for years and decades and pretty much nothing being done to really stop.

Dirty business as usual in the dirty corrupt SE Queens in the corrupt borough of Queens in one of the biggest corrupt cities in the country.

The problem is that to avoid tickets the trucks simply take the license plates off. And since most trucks have out of state plates there is no registration sticker in the window, therefore no ticket is written and they get away with it.

You can make the fine a million dollars, it wont matter since they take the plates off and can't get tickets, and they will never tow these things either for some reason.

The only solution is to have these trucks towed and impounded.

Waste of time. The trucks will just move to another area.

Well if hotel rooms weren't $250, $300, $400 a night after all the taxes and surcharges maybe these guys would not be pulling over to seep and guard their CB radios and stuff.
SE Queens and Jamaica is the worst.
You now also have lots of mobile home Irish Gypsy travelers like that Romanichal "home improvement" and driveway fix caravan by Home Depot on Woodhaven blvd.
Note all the hose and 5 gal drums on the sidewalk with the labels peeled off.
They been snooping around telling old lady's that condensation on windows are leaks that causing deadly mold and all other sorts of bullshit.
Like : Buy a $27 5 gal drum of Home Depot black airport driveway sealer and cut it with 55 gals of water, spray it on and charge $1000 for a job that will only look good till it drys.
Keep your eye out ! The Irish Romanichal are working the area like never seen before BEWARE. They are all devil gifted polite bullshit artists and the target are our elderly !!

Since the inundation of my neighborhood by Chinese a couple years ago, we are now seeing what we never saw before--shuttle vans, ambulettes, and elongated vans, all bearing the names of businesses in English and Chinese, parking on our very residential block. It's already very difficult to find parking there, due to the proximity of a college, and their stinking vans and buses take up 2 spaces each, effectively halving the parking spaces where they're already hard to find. I certainly predict many more to start parking on our street, as they are on surrounding streets. Some of them bear passenger plates, which I believe is strictly illegal. Some of them bear bus plates, which I believe makes it illegal to park on a residential street overnight. Many of them bear livery plates, and why it is legal to let school mini-bus sized shuttle buses to have livery plates instead of commercial is beyond me. Clearly, they are commercially-used vehicles and have NO business taking up spaces on our street. More examples of NYC now being NYS___y.

Same issue on the GCP Service Rd near Forest Hills High School. I’ve lived here going on 10 years and rarely have i seen any enforcement. Usually once a year when the 112 wants to make a social media post about “Look at us and all the good we’re doing for the community.” Bullshit! On normal days if you file a complaint on the 311 app they close it out with “No enforcement required.” And in the mean time there are upwards of 20-25 trucks parked there all weekend long including in the school parking lot. How is this anywhere near legal? Trailers with no tractors attached. Car carriers, etc. The school is city owned, how is that not illegal? A couple of weeks ago as I passed by, I saw a kid run under a truck which was in the school lot along the curb. He popped out right into the street. If I hadn’t had just seen him as he went toward the truck on the other side he would have appeared right in front of me. Then, when they leave they just leave their garbage laying on the curb all along he service rd. We’ve had reporters out here doing stories on it. NOTHING gets done.

Where's the Teamsters Union in all of this. Jimmy Hoffa woulda made one phone call and shut NYC down till they came to their senses.

Yeah! Right! And who the guck will enforce it? Bingo! Tax increases coming soon!