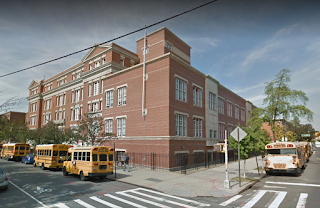 Despite School District 24 being the most overcrowded district in Queens, a huge decline in enrollment at one elementary school in Ridgewood could be indicative of a shift in neighborhood demographics.

On June 27, Department of Education (DOE) spokesman Doug Cohen confirmed that P.S. 88 on Catalpa Avenue will have to fire nine teachers due to a decline in enrollment of 100 students for the 2018-19 school year. Cohen explained that while enrollment for the 2017-18 school year was 941 students, that number is projected to fall to 841 next year.

Since schools receive budget allocations based on the number and needs of their students, the resulting budget cuts for next year meant that teachers had to be let go, Cohen said.

Yet, according to the DOE’s Fair Student Funding records online, P.S. 88 is far from the only Ridgewood school to be hit with budget cuts.

According to Pat Grayson, chair of the Community Board 5 Education Committee, the declining enrollment and budget cuts at elementary schools is a direct reflection of the changing age demographic in Ridgewood.

“In actuality, people got up and moved away,” Grayson said. “Millennials are the people who have children when they’re 42 … people who are buying here don’t have a family yet. The point is, the neighborhood is no longer an old person’s neighborhood.”

As this is part of District 24, which is supposedly the most overcrowded school district in the city, it's hard to fathom that this is going on. A lot of new schools have opened in Ridgewood in the past decade or so, but why?
Posted by Queens Crapper at 12:27 AM

Everyone I went to high school with moved to Ridgewood and are now raising cats.

"In actuality, people got up and moved away,”

They moved away because they couldn't afford to pay $2,500 a month for a crappy railroad flat.

Does anyone else not see why this is a bit contradictory to what the gubmint is telling us? Shouldn't we shake the system up a bit instead of blindly following the orders of the SCA?

Also explains to some extent why all the Catholic schools in Ridgewood are closing or merging.

A lot of crooked pols see Ridgewood as a forgotten place along with others in Queens.
Gut the mane and where permissible build higher density barracks.

QNS Is misinformed or has misinformed itself.
Them Ridgewood people (most of them) aren't having kids because they do not receive sec 8 benefits.
Both husbands & wives couples have to work and pay the $2000 rents, taxes, high mortgages and cant afford to have children. Those that CAN afford kids move away so the children do not have to suffer and endure the "vibrant and diverse" progressive liberal run brainwashing camp called the DOE AKA: NYC public school system.

Forced diversity. As in have the feral immigrant boys touch, harass, grope and follow your little daughter around every day and not have the teachers, principal and cops call it "diversity" and call you "racist" and not do a dam thing about it.
FUGGGGGGG THAT --not even over my dead body!!

Neighbors daughter is 15 and pregnant--raped by a Salvadorian refugee boy she met in school.. Again FUGGGGGGG THAT --not even over my dead body!!

"Neighbors daughter is 15 and pregnant--raped by a Salvadorian refugee boy she met in school.. "

As I see it, what has happened out there and several other neighborhoods in Queens is that the cost of rent has outpaced the desirability of the area.

What happens is that it drives out those who would have families and send their kids to local schools, but does not yet attract more affluent families.

You end up with the "barracks scenario" -mostly single people crowded into living spaces to share the rent, but as a result, having neither the space nor the money to consider a family.

With all these layoff and saving money (perhaps millions) will taxes in district 24 go down or perhaps those funds can be diverted to improve other public services?
Sanitation for one.

I dont know if its my allergy playing tricks or is Myrtle ave starting to stink like Right Guard made a turn left in a porta-potty?

deBlasios is putting these big hormone crazed 16, 17 year old border refugees in with 3rd and 4 graders, cant read, write in any language yet are roosting the classrooms and going after girls (who dare intervene) like Saddam Hussein kids.
Total chaos and no teacher or principal blow the whistle or say or do a dam thing about it.

Whats happening should be CRIMINAL, the Governor, Mayor and DOE bosses all belong in prison with some of these former "poor innocent refugees" getting a taste of what our kids are going through.
It should be a requirement for all these DOE suits and politicians to spend a day in prison incognito with these people before deciding what's best for our children.

Working class nabes are considered dominantly white neighborhoods that dont vote progressive.
And its gonna get worse, wait till liberals have the House, Congress and the White House. All these Millionails and children of illegals (huge numbers) will soon control the vote. Keep in mind they want, universal government income, no borders and everything socialized .

Its going to be horrible

It doesn’t matter what the voter turnout is when the candidate pool more closely resembles a cesspool.

"A lot of new schools have opened in Ridgewood in the past decade or so, but why? " Back on topic - Crowley. The corrupt councilwomen with deep funding from the Building Trades Council - and every other Union under the sun said their people needed to work. And build schools and additions she did.

Why is it that PS 49 in MV got 2 additions (when everyone said build a large scholl the first time)?

Why is PS 128 building an addition to a NEW building, a few years after it was created?

Keep labor working and all of us paying for it. Those construction workers have been going to the same job sites - 12 blocks apart - for the last 10 years. Once on this side, then back to the other location, then back to the first one........That's not an accident.

Please tell some of those bussed in students - there are now openings in their neigborhood in Ridgewood. MV has been too full for locals for years.

Who would have guessed?