No one ran a background check? 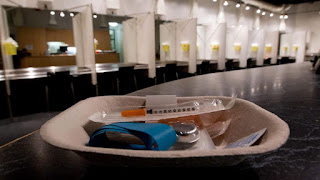 The site functions as an off-the-radar version of what the city hopes will be one of the first government-monitored supervised injection sites in the United States: Safe spaces where addicts can shoot up without interference from the police.

Mayor de Blasio has endorsed a plan to locate four sites citywide, including one at the Washington Heights location.

But no supervised injection site has been officially approved in the city — and there are doubts it will ever happen, given that the Department of Justice opposes the idea.

And as of this week, city and state health officials said they were not aware of Washington Heights Corner Project’s bathroom arrangement.

City officials were also unaware that the couple who now runs the Corner Project — Liz Evans and Mark Townsend — had to resign in 2014 from a supervised injection site in Canada after government auditors uncovered lavish spending on fancy restaurants, limo rides and four-star hotels in Europe.

Since then, Evans and Townsend relocated to New York and began running the Washington Heights Corner Project — and promoting the idea of opening more sites in the city.

This year Evans was appointed to an advisory panel on the subject by the city Health Department and was quoted by Mayor de Blasio in his May 4 press release announcing the push for the sites.
Posted by Queens Crapper at 12:19 AM

Shit, just like Amsterdam Denmark and Canada including the design and furniture.
What group or liberal millionaire funded this shit?

Why overdose-prevention ?
Does anybody know how much crime (monitory and otherwise) these people cause to buy all these daily opiate fixes ?
Rehab does not work 90&% the time, its sad but when the brains dopamine and endorphin receptors are damaged its permanent. Those receptors they don't grow back and that's the end.
Jailing them before they do this damage or letting these people kill themselves is perhaps the two and only 2 good things you can do.
That's right, let them kill themselves

Sounds like a good deal for NYC. Now all the addicts from Canada to Mexico, from Sea to Shining Sea, will flock to the Apple to get the free fix and add to NYC's all embracing diversity. Have fun folks!

This is DeBlasio's New York. He of the empty suit and the halfwits and policy pretenders he surrounds himself with. Managing a two-car funeral would prove elusive. His housing authority. His inept transit authority. His disgraceful schools administration. His developer buddies and the graft he collects. He owns it all. And those who voted for him? Lazy minds captive of airy slogans and consumed with urban myths? They deserve every bit of his idiocy. And they re-elected him!

Nothing seems to take off smoothly for this administration.

Why do New Yorkers keep blaming Dumbo? You re-re-elected him didn't you? I hear that he's thinking of changing the name of New York, officially, to Needle Park!

put the shooting galleries throughout the districts that voted overwhelmingly for de blah blah and of course under COMMUNITY CONTROL the same.
how could they even consider to allow outsiders to take over ?

""how could they even consider to allow outsiders to take over""

Duh ! Because this mayor is copying from Canada, Amsterdam and Denmark piece by piece. Next they will look for a way to get into your home to look for potential unused housing space. Say goodbye to that TV, bar & pool table in the basement soon.
That pregnant single mother of 4 needs it and according to this socialist mayor her situation outweighs your rights.
Its called "democratic socialism" or "Scandinavian socialism" and all the young voters including children of illegals born here (becoming voters) want it.
The Democrats are getting a head start on securing this agenda

Mark Townsend and Liz Evans did alot of good in Vancouver - insomuch that they saved many lives and so gave people a choice to turn their lives around and recover from addiction. It can be done if you are alive but it can't be done if you are dead. Simple.
However it is true to say that they paid themselves six figure salaries and the review of the accounts of PHS caused people to call them "Poverty Pimps"... not really a fair description.

As Townsend pointed out, alot of the money for PHS projects came from George Soros and I would imagine that he is still helping them. This is why they are employed in a similar capacity in New York. Therefore they reflect and act within the politics that he champions.

The question that needs to be asked is this.
Were Mark Townsend and Liz Evans engaged in criminal activity in Canada, when it came to the mis-use of funds?
If "yes", then why aren't they facing court and prison?
If "No", then presumably they are ok to run (and get even richer) on a similar organization.
If there is more to investigate, then its surely up to New York to investigate.
The Canadians opted for "No - they aren't criminals"

Mark Townsend has always been a very dangerous person - along with his sidekick, (lets call him Sam.. not his real name ) Mark and Sam, and a sinister middle aged man for whom the word "inappropriate" could be used, were a very unholy trinity in the early eighties in south east London. They intimidated recent victims of crime, they bullied, bitched and carped - all while pretending to be "born again Christians" … and they were all three very predatory when it came to vulnerable females of student age. Or a bit older cos for Mark, it was also fun to visit a single mother on Wickham Road, for a bit of "fifty shades" fun, before they both went off to a dodgy charismatic church, presumably to get "forgiven". Sam does a plausible act at being mr bible head to this day, but mark's dropped the act. Interesting to note that Mark's interest in the health of junkies did not hit till the money signs flashed in his goat-like eyes. He was around them in the eighties and refused many a hand that was extended for help. No money in just being nice, you see.... gotta wait till you can pay yourself a six figure salary. Atta boy Mark. So so so pleased that he has been found out. Sad that Liz got dragged down too, but she knew what was going on.