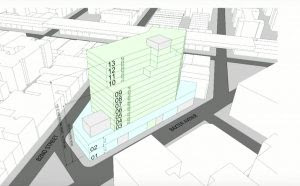 The controversial rezoning plan for 40-31 82 St. near the Jackson Heights-Elmhurst border has been withdrawn following months of community uproar, according to activists, Assemblywoman Ari Espinal (D-Jackson Heights) and the office of Councilman Francisco Moya (D-Corona).

In a press release issued Saturday, Espinal took credit for the withdrawal of the application, saying she successfully urged Councilman Francisco Moya (D-Corona) to withdraw his previously pledged support for the project.

In a lengthy post on the group's Facebook page a day earlier, activist group Queens Neighborhoods United cheered the news but said it will continue to fight against any plan to develop luxury housing on the site.

However, a Department of City Planning spokesperson told the Chronicle on Monday that the agency had not received a withdrawal letter from the developer, Sun Equity Partners.

Sun Equity Partners did not immediately respond to requests for comment on the demise of the proposed 13-story, mixed-use structure — dubbed The Shoppes at 82nd Street. But the group's spokesman, Hank Sheinkopf, confirmed the decision in a statement issued to Politico.

"After conversations with Councilmember Moya and Assemblywoman Espinal, and taking the borough president's recommendations into consideration, we have decided to no longer pursue this rezoning application," Sheinkopf said. "We are continuing with construction as permitted under the current rezoning."
Posted by Queens Crapper at 12:59 AM

That's the way to do it....COLLECTIVELY AND WITH DETERMINATION!
Do not let REBNY owned political scumbags screw you!

More crap going up...nothing new. No matter how much you try to fight it, the government will still do what it wants. Mayor dumbdumb will push it through.

The developers plans or the donations to the politician were not as promised.

Perhaps in the other boroughs its a common occurrence for the public to get their way and the community board and elected officials swing behind them, but that NEVER happens in Queens.

10 stories and the Target as originally intended can still go up. Boo. But 3 stories pared off is still three stories less of unneeded luxury development.

BTW Tony plenty of "white people" "still" live in the area, you clearly have never been along 37th (not that it matters) or anywhere further out from Roosevel. The area is home to a lot of decent, hard-working families from all over. Or did you only care when it was historically more Jewish decades ago?

The community doesn't need a Target, there's one right on the boulevard, where there's more parking anyway.

Newsflash: people of all stripes and creeds like leafy, low-rise, centrally-located neighborhoods like this area where you don't pay Manhatthan prices for FRESH produce and you can actually get GOOD food, cooked WELL, and pay DECENT rents in nice pre and post-war walk-ups, or buy a NICE co-op unit like my polish buddy moved here some years back just for those reasons.

Anyway, read the whole damned article - Ari probably pushed harder against this because a competitor for her position turned out to do the same a few days back.

Just another example of REBNY-interests lusting after a firmly middle/working class area that it just KILLS them they're not building-up and ruining yet.