Composting program not progressing as planned 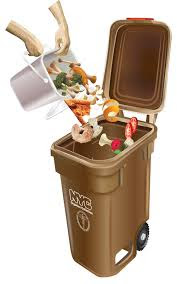 The city’s Department of Sanitation is delaying plans to expand curbside collections of compostable kitchen and yard waste beyond the program’s current footprint.

But DSNY officials say neighborhoods that already place their waste in brown bins for recycling will continue receiving the service while the city looks to adjust some aspects of the program.

“We believe that for the program to be successful over the long term, we must ensure New Yorkers are getting the very best service when curbside organics collection reaches their neighborhoods,” the DSNY said in a statement to the Chronicle. “To achieve this, the City is evaluating its current service with the goal of increasing efficiencies and streamlining the program and has temporarily placed the schedule for expanding the curbside organics program on hold.”

The agency expects to have a modified expansion schedule in the coming months.

The DSNY said it is expanding its outreach effort in communities that are slated to join the program soon after it restarts.
Posted by Queens Crapper at 12:40 AM

Third worlders don't compost...they just throw their garbage on the ground. How culturally insensitive that one would make them compost.

Wanna bet that a lot of organic waste is being treated just like all other waste?

This is hysterical. The NYC Gov link for the compost dropoff stations in Queens is not available.

It costs the city $millions just for the brown plastic containers alone. Are these containers recyclable? Hmmm

Most of us in our great city live in spaces that are so cramped, they likely wouldn't meet Finland's incarceration standards for mass murderers. Can you imagine us having to find spaces in our packed refrigerators or closets to store chicken bones and rotting bananas?

Also a full map at

How can the city think composting will work in Queens (at least in parts like overcrowded and filthy Elmhurst, where I reside)!? We can’t even control regular trash... The streets and curbs and corners are covered with litter and dumping and household trash (even literal trailer trash: the guy who lives in the silver trailer with his wife and brother deposits bags of his household’s garbage on the streets and dumps his sewage into the gutters). Composting will just add more rotting exposed garbage to our already filthy streets. We need more public trash cans— I know, ppl will use them to deposit household trash, but guess what?- they’ll deposit that trash on the street anyway; eliminating public trash cans will not solve the problem. Maybe composting will work in neighborhoods where ppl care about cleanliness and feel a sense of responsibility to themselves and their community. But in garbage-strewn places like Elmhurst, it is not a good idea. Common sense.

Yea, the illegals we love so much as a city aren't gonna go along with the whole recycling and composting thing. They only know how to dump their garbage in the street.

More Communism. It just never works, does it?

Out of the 75 or so houses on my block in Queens only 5 of us are doing the organics disposal. I asked a couple of my close neighbors why they do not do it? Most said they don't have time to do it or can't be bothered.

I get the point to it but nobody has time for this. Plus, by you actually separating the leftover scraps from your regular trash I would think would make more raccoons go through your trash. The trash combined together I think kind of throws them off the scent that there could be something good to eat in the can but when you put just food in one container together then I would think it would invite the raccoons even more.

Well, Crappy, we compost and we don’t think it’s a Communist plot, I don’t give a flying crap what my shitty inconsiderate off the boat racist Asian neighbors are doing. We are composting and appreciate the city’s effort in our neighborhood to pay tribute to conservation, The city does little else here, and I hope the program continues and expands

We compost but the brown cans are too small.

I've been composting for 50 years in my garden and have been participating in the city's efforts for a few years.I know most of my neighbors hasn't bothered to comply but I hear in a couple years it will be mandatory.Most people don't want to keep smelly kitchen scraps in that small container and the biodegradable bags are expensive and hard to get.Right now I see the recycling program is a mess,I see lots of mixed up containers at the curb and without enforcement it will fail.
Went to Governor's Island last week and all takeout food trays and knives,forks and straws are compostable so this is where we are going.Remember plastic is forever and choking our planet.

Fuck you DOS! Garbage is garbage.
Shall we sterilize all of our trash next before you pansies dain to pick it up?

Not sure why everyone is so against. It’s not hard to just toss garbage in a coffee can like Nonna used to do. When I was a kid we always had a rubbish bin and a garbage bin (organically). And I’m 35 so...only recently people decided that it wasn’t a thing anymore.

It's a mandatory Communist Plot!

When this program first started, half my block put out compost. But within a few weeks, sanitation stopped picking it up, leaving the brown bins to sit untouched for two months straight. Once they started picking it up again, pretty much everyone had given up and stopped putting it out, and most people don't even seem to know they do it anymore.

And that was in the middle of the winter. If sanitation misses even one pickup in the summer, the rotting food would stink up the entire neighborhood. In this weather, once a week for compost isn't even enough.

Another thing I've noticed is that even though they're using those split half garbage trucks that take rubbish on the right and compost on the left, they've been sending out a separate run just to pick up the compost. Almost no one uses it now thanks to their earlier bungling, yet we're paying for an extra, totally separate garbage collection for it? The City doesn't have the money for that!