We should do this here! 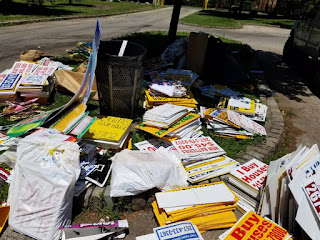 ...while these so-called “bandit signs” are actually illegal in Philadelphia, it’s a tough problem to fight. So Philadelphia’s Zero Waste and Litter Cabinet recently teamed up with 24 community organizations to form the city’s first-ever “Bandit Sign Brigade.” Over the month of June, some 8,000 illegal flyers were removed from the streets.

“We had groups representing every part of the city tearing these signs down,” said Nic Esposito, who is director of Philly’s Zero Waste and Litter Cabinet in addition to running an urban farm in Kensington and a local publishing house. “They find this a sign of disrespect, that you can come in my neighborhood and put these signs up and think that it’s totally fine to do that.”

The Bandit Sign Brigade amassed significant data on the location and types of signs being hung around Philly to aid the city’s Department of Licenses and Inspections in tracking down and punishing the people responsible for the signs.

The city is also offering a cash benefit, paying 50 cents per illegal sign removed to eligible groups, up to $500 in funds for community cleaning and greening supplies.

To learn more about the Bandit Signs Brigade, visit cleanphl.org/illegalsigns/.
Posted by Queens Crapper at 12:45 AM

This would be a great idea here as we are flooded in this city with cash for cars and we buy houses signs. But I'm sure they won't do it here because it's an idea that makes sense, and we only do things that make no sense or pander to a minority group.

Great idea!
So....has John Liu paid his bandit sign fines yet? What a piece of trash, he himself, is?
Political trash...the worst kind!

Paid street parking zones, predominantly one way streets, one of the most brutally efficient parking authorities (they made a TV show about it!)... There is a lot we could learn from Philly DOT. (Yes I realize the city has a lot of other problems nonwothstanding.)

The city should offer a reward of $1.00 per sign. The same people who collect recyclables would love that!

Don't we PAY taxes to have sanitation clean these up?

Don't we PAY taxes for law enforcement to fine the people who put them up and on whose behalf they are put up?

Now we GIVE taxpayer money to people who hand these in? That is RIPE for scamming.

I hope we don't start this nonsense here.

The reason we do not do stuff like this in Queens is our politicians have not told us to do this. Every initiative, every thought, every action anyone in Queens does has long ago been determined by them.

For example, they got rid of Parkies to clean the parks. Bad idea for development projects on the waterfront. What to do?

Why have Greenshores, Astoria Park Alliance, Gantry Park and Whitey Ford Field groups do the clean up!

That's all that happens ?
In Texas they jail you and do an investigation. It usually $1000 fine + 40 hours community service for the guy putting them up and $10,000 for the business.
Will all the camera's lurking today you need to be an idiot.

Ha! People just won't have time, all they do is complain about the signs, they never take action to get rid of them. And the politicians, they have a press conference where they speak of the scourge of these bandit signs, and pledge to get rid of them, have their photo taken...and that's the end of that.

Wasn't cleaning up this crap something the welfare loafers were good at? Don't we pay them and house them and feed them already?

No more paying people for things we have paid for already.

Put the professional parasites to work on this immediately.

So? Where are the videos from the ubiquitous iPhones showing the bastards putting the signs up?

"Put the professional parasites to work on this immediately"

YES especially the new arrivals from the Texas border the shit mayor is importing by the 1000s. They want free lawyers, food, housing, medical, dental, education, EBT cards on your dollar? Well MAKE THEM FUCKING WORK like Roman slaves till they accept birth control, domesticate themselves and learn English as a start !!!
I sure hope New Yorker's have finally learned a good lesson about bad voting habits.

How the hell can the greatest city in the world be under control of such a bunch of assholes is mind boggling!!