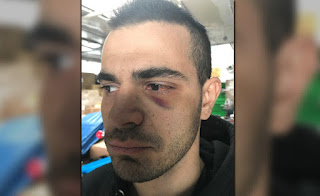 A Queens man suffered a one-two punch when a homeless shelter resident struck him in the face — then cops refused to put key details of the assault in their report and closed the investigation in one day, the Daily News has learned.

Edward Karakash, 29, said the man called him a “cracker” and slugged him outside of the Queens Blvd. car repair shop where he works, on Dec. 18.

The auto shop near 54th St. in Sunnyside is adjacent to a Quality Inn which the city has converted into a homeless shelter.

“A laundry van for the hotel was blocking my driveway and I was honking the horn,” he said. “A guy comes out of the hotel with a friend and starts threatening me. He said, ‘I’m gonna knock you out, cracker!’ Then he punched me in the temple.”

The suspect ran into the hotel. Karakash went to the hospital where he was treated for bruises after telling cops what happened.

His mother, Karine Karakash, 50, an eyewitness to the attack, said doctors initially believed he had broken bones in his face.

Unbeknownst to Karakash, cops closed their investigation the same day even though he gave them a photograph of the perpetrator, video of the assault and told police where his attacker lived.

The complaint report claims wrongly that Karakash refused to give his contact information and says there were no witnesses.

“They did not put on the report that he was from the homeless shelter,” Karakash said. “They just put that it was a random person who ran away.”

It was only when community activist Bill Kregler, a former Republican candidate for Queens Borough President, got involved that the cops changed their tune.

Karakash said the neighborhood has had problems with shelter residents before. Back on Oct. 14, someone else from the shelter hit him with his car and the police refused to take a report.

“I got hit while I was taking a picture of the plate,” he said. “The police said they weren't going to take a report.”

Years ago when similar problems were happening near the Pan Am, this blog reported that crime in the area was increasing and that police were not taking reports. They publicly denied this and several of the reporters covering the situation claimed we were lying. It's clear who was telling the truth and who is full of crap, now, isn't it?
Posted by Queens Crapper at 12:56 AM

Under this corrupt mayor (and imcompetent DSS commish Steven Banks) his and his developer donors neoliberal fauxgressive agenda, the blue wall of silence has become the blue wall of insouciance.

AND crime is down in the city states the powers that be.

AND Queens is the most wonderful place to live in the world with Jamaica & SE Queens the crowing jewel.

As Stalin said, it is not who votes, but who counts the votes.

Manipulation of numbers with a compliant media.

This is what happens when you live and work in a shithole.

"Karakash said the neighborhood has had problems with shelter residents before. Back on Oct. 14, someone else from the shelter hit him with his car and the police refused to take a report."

This may sound persnickety, but how the fuck does a homeless person still afford to drive a car and pay for insurance and gasoline? I still have to ride a bike dammit.

infuriating. if the guy had struck back, they'd have crucified him in the news.

What am I saying? These lowlife goons are contractors hired by the city or non-profit groups running managing these homeless shelter hotels.

Does anyone actually believe that the suspect lived in either Woodside or Sunnyside before he made himself homeless? He's homeless by choice to get a monthly rental subsidy.

They should be investigating why single males are living in hotels that are intended for single mothers with children. AND the code violations in that hotel.

DHS and DeBlasio are destroying quality of life by dumping these criminals in nice neighborhoods. Put him in the Bronx where he will be more comfortable.

Banks and DeBlasio are too busy making Republicans to give this any notice.

If fact, let our mayor spend the week in that hotel. With out his security detail. See how he likes it.

Again with that farkakter vertical imaging!

Hold the device h-o-r-i-z-o-n-t-a-l-l-y and make a more judicious use of screen space!

Now let's see if the situation was this:

I think the situation would be different. All hell would break loose from activists and Al Sharpton.

I mean if this city and Democrats are going to play identity politics, well, then play it all around.

This whole thing is such bullshit, first another problematic homeless person and then a homeless person with a car. I work full time for years and don't have a car nor could really afford one and the upkeep and parking.

SOMETHING MAJORLY WRONG WITH THE SYSTEM, but then we already knew that.

That is a classic shitcanning by the police. Call 800 prided and have them explain to Ian why they did not make the arrest..

The cops don’t want to take reports or make arrests because that shows crime is not down. They are afraid the commanding officer will deny them days off or good assignments. If crime is up the co doesn’t get promoted.

"Kregler, a former cop and fire marshal, said the police claimed they didn’t have the security video evidence, but he has video of the police actually watching the footage on the night of the attack."

Oh man that's rich. It's idiotic the City ever thought turning these motels into homeless shelters was a good idea. What you'll never hear big-mouth Blasio say is that small time crime clusters along the whole western corridor of Queens blvd, from Sunnyside->Woodside->Elmhurst (and Maspeth, too).

Things like car break-ins, people walking late at night and getting mugged for phone/purse/wallet, and day-time burglaries.

What's the common thread? Couldn't possibly be all the Motels-turned-shelters along the boulevard, absolutely not...no vetting, no security, no oversight, this is what happens. You get into of these places, you should be required to check in nightly for curfew.

Still waiting to see Park Slope and the Upper East Side open up some shelters instead of trying to wedge them all in my 'hoods..

this should be all over the news what happened here - Marcia Kramer should be informed and how come Mr. JVB isn't saying a word about this -- strange to me since he knew about this hotel becoming homeless since May of 2016 and he kept denying that he knew about it -

He called him a cracker...... hate crime......call internal affairs and the hate crime task force.

I know exactly where this incident happened. There is a high school near by and a Citibank which means kids will be the target of harassment by these homeless residents and people making a transaction in the nearby bank will get robbed.

This Guy needs some Liberal NYC self defense lessons.
Learn to duck, cover and hide. Then call 911 and become the victim !

Be thankful that you have so many bicycle lanes...

In Texas and other states the guy could have shot or clubbed the bastard, especially if there was no place to retreat. Folks that cant fight off some Anthropoid need to carry "extra help" in particular areas at night just in case they need to take immediate action when the police aren't around or at least place some distance between themselves and a would be attacker when “standing down and retreating fist” as New York’s shitty useless castle doctrine statute requires) is not possible.

Remember your better off judged by 12 then carried by 6, this unconstitutional infringement of rights to disarm law abiding citizens in New York has to go. The dopy mayor, governor, DHS, DSS (who travel with a convoy of taxpayer armed police and have guns themselves) liberals and fascists refuse to acknowledge the fact that when you disarm your law abiding citizens the scumbags know they are "safe" to feed on and pull shit like this.

Australia recently grabbed the guns and now crimes involving assault, rape and home invasion instantly went up over 300% Id say that’s proof and all that needs to be said.

"Be thankful that you have so many bicycle lanes.."

I'm not (sarc). I did fine for decades without them. Your concern is always appreciated.

I know I wrote this above, but it's worth repeating. The scumbags that have attacked this citizen might not have been homeless, but hired toadies by the city, the non-profit or even a security contractor hired by the filthy hotel owners. Because why would a homeless person risk having a room to dwell in by assaulting someone? And these incidents involve culprits with cars, the second doing what seems to be a delivery (of laundry, but who knows what else).

It also looks like the people around these shelters are familiar with the victim, which might explain why they attacked him so brazenly.

Has the perpetrator been arrested? Yet?

Is it all possible that he did not live there but was 'staying with' one of his children's mother's? - I refuse to use ebonic talk. Maybe he was a freeloading user and was busy using the single mother's free hotel room. And what ever else he could take.

Don't forget those great Christmas presents the kids got that he probably sold before they could open them. Good Samaritans do these annual blow out Christmas parties complete with expensive toy give away.
AND was dealing drugs or selling loose cigarettes to make enough money to afford a car.

Has the perpetrator been arrested?
NEVER 90% of the time when its black on white or brown crime.
If it were the other way around the media and TV would be screaming HATE CRIME, INTOLARANCE to high heaven, one would be caught and in jail on multiple charges pending $$ 1/2 million dollar bond.
My friend a cop at the 104 said the mayor doesn't want black & Hispanic people arrested unless the arrest numbers of whites are equal. Until then the cops (especially captains near retirement) must look the other way or face weeks of "shitty duty" at some school, intersection or courthouse.

This is just a drop in the bucket. Imagine what really goes on there, if the cops actually took reports of incidents as they occur. sad.