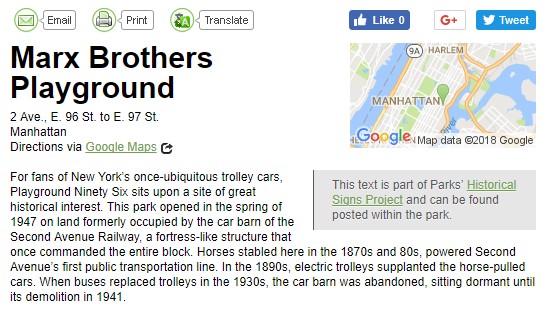 The latest battle between New York’s preservationists and developers is being waged over a 1.5-acre parcel of jungle gym and soccer and baseball fields, known as the Marx Brothers Playground.

Preservationists say there is no question that the space is a park. The city parks department has maintained the lot, wedged between 96th and 97th Streets on Second Avenue, since 1947. The department’s leaf symbol adorns a plaque affixed to the gate.

But city officials, who plan to partner with the developer AvalonBay to turn the site into a 68-story tower with school facilities, retail space and a mix of market-rate and affordable housing, insist the space is a playground.

That seemingly minor quibble of semantics is crucial. Parks require the State Legislature’s and the governor’s approval before they can be modified. Playgrounds do not.

Funny thing is that the Parks Dept's own website calls it a PARK.
Posted by Queens Crapper at 7:25 AM

Flushing Meadows Corona Park lost the war on its own park, when in 1993 Mayor Dinkins gave to the USTA parkland to build stadiums.

Maybe I'm missing something, but the Parks site and your image say Marx Brothers Playground.

The de Faustio administration, especially the shitty and certifiably insane city planning dept and his fixer deputies, shows with great venomous alacrity and defiant hubris how they don't give a shit about the people living and striving here and even the damn environment and their infinite subservience to their predatory developer donors

It's apropos to let professionals analyze this vicious land grab:

Croft did a great feature on this on his blog last summer.

Sal Albanese during his overmatched campaign.

And Groucho talking about his childhood with Dick Cavett.

The semantics bit is quite silly.

There was a big to-do on reddit over an UWS Church that WASN'T going to be converted into high-end lux condos (shills crying YIMBY were falsely correlating these "selfish" preservationist moves with high rents..)

In Barcelona, in Hong Kong, in Saigon, in many, highly-dense, very crowded cities I've been to, the City planners (with a strong centralized command) still left plenty of space available for parks and green space. Even in Bangkok, although sadly not nearly to the same extent. Not so here. BDB has that socialist dribble about wanting "government be able to determine which building goes where, how high it will be, who gets to live in it, what the rent will be" - funny how his socialist impulses don't include keeping vibrant green spaces viable, or keeping light and air accessible to all (guess those socialist impulses aren't profitable or in accordance with the "needs of the community").

Dromm earned a point or two recently as monies been put forth to renovate (without destroying original uses) a local park. I'm sure the local community around the Marx Bros park enjoys using it for what it is. Too bad they aren't the "community" this administration listens to.

This is a great posting from you Crappy on a number of levels.

Perhaps the most important is not perhaps on content, but that you are posting something that is happening in another borough and bringing it before a Queens audience.

One of the reasons the local talent gets away with what they do, is that their constituents are cut off from what is happening in the rest of the city. Remember what someone said, about 'Crowley's Hermit Kingdom of Queens.'That's why they get away with a lot, not only making our life miserable, but as a collective gang on various legislative bodies, play a big role in bringing some of the worst of their self-styled 'Queens Values' to people that are wise enough not to want or need them.

Not only are problems generally handled elsewhere in the city with the community getting a far better deal than in Queens, but their elected officials and community boards actually actively support many of the things we complain and get no attention, or worse, complicity, from those offices and bodies in Queens.

This all should be a real eye opener for the Body Politic of your borough. Good work, not only for Queens, but, by enlightening that borough, these benefits go to the rest of the city, too.

All lines have been blurred.

One day I am identified as a woman, other days when I am feeling more masculine, I self identify as a man, other days I am just unsure and the genitalia just confuses me so much more.

So this plot of land may identify as a green space, a park, a playground or now a multi use structure.

This is a product of culture where words are continuously being redefined to fit the agenda of the day.

One reaps what one sows...

off topic but check this out crappy
http://www.nydailynews.com/new-york/nyc-routinely-put-homeless-families-prostitute-friendly-hotels-article-1.3737036

'Crowley's Hermit Kingdom of Queens" has basically expanded citywide....he controls, or shares control of the city council now that he has his hand-picked speaker...soon he will have all of the patronage jobs in the central office at his finger tips

Corruption under the guise of progressive politics. Stupid libs.......

'Crowley's Hermit Kingdom of Queens" has basically expanded citywide....he controls, or shares control of the city council now that he has his hand-picked speaker...soon he will have all of the patronage jobs in the central office at his finger tips.
*
Not so fast - Queens politicians, like fresh brewed beer, don't travel well and have little appeal away from their local lumpenproletariat they carefully protect from the 'outside world' (read 'non-party perspectives and ideas').

The politicians in Manhattan (and elsewhere) do community building things that are unknown in Queens - support Landmark designation, fund organizations that try to build communities, etc.

The problem in NYC is that the Queens delegation forms the cornerstone of a pro-builders bloc that destroys communities around the city in the same way that communities are being destroyed in Queens. No one outside of Queens likes or trusts that Queens crowd, and that includes the politicians in the rest of the city.

This explains why no Queens politician, as for example Vallone, gets traction anywhere beyond their little fiefdoms.

There is resentment that is building in Brooklyn and Manhattan communities against the influence of Queens politicians. Sooner or later they will discover that helping the underground efforts of communities in Queens to wrestle their neighborhoods back from 'cunty' will also help them beat back those same barbarians across the East River from their backyards in the West Side, Bed-Sty, Tribeca, and Crown Heights.

That, plus the internet with blogs like Crappy and the Anti-gentrification folks will open the doors to Queens residents short circuiting the garbage the Democratic Party feeds them, and give a real opportunity to the most dangerous thing that any fascist political machine fears: people talking to each other and forming their own conclusions on what is best for them and their families.

Only this will spell the doom of a cancer that has afflicted our city for nearly 150 years - Machine Politics.

When I lived on the UES this was ALWAYS a park. It was neglected for awhile until they spent a lot of money fixing up. It was nice for about 2 years before they started the 2nd ave subway project when the park was torn up AGAIN to accommodate construction trailers and the like. This is absolutely ridiculous.