Woodside Houses without heat during storm 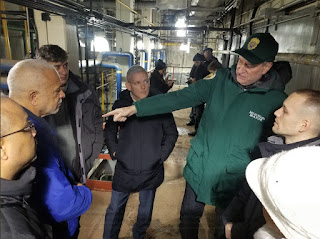 Around 3,000 public-housing residents in Queens were forced to ride out Thursday’s blizzard in units with little or no heat — prompting some to risk carbon-monoxide poisoning by cranking up ovens and stoves.

The latest suffering inflicted on hapless tenants of the New York City Housing Authority led Mayor de Blasio to blame “decades” of past neglect, just days after he was sworn into his second, four-year term.

A NYCHA spokeswoman said they were told about radiators going cold in all 20 buildings at the sprawling Woodside Houses around 11:15 a.m. Thursday.

Spokeswoman Jasmine Blake said the problem was caused by a drop in the pressure of natural gas supplied to the complex’s steam boilers by the National Grid utility company.

Blake said NYCHA maintenance workers adjusted valves to provide some heat to the lower three floors of the six-story buildings, and a National Grid spokesman said it restored full pressure in the gas line by clearing “debris around the strainer around the gas meter” at around 1:30 p.m.

So with another bullshit against low-income and the vulnerable, how can our asshole mayor claim he is such a progressive, when he is letting low-income, elderly, children and the vulnerable FREEZE in city housing. THIS IS NOT PROGRESSIVE or LIBERAL. This sounds like hardcore right conservative republicans who love to screw over the vulnerable.

AND the same people who are freezing put this man back in office, along with other asshole that believe his bullshit.

This is "affordable housing" run by your government...

This is the real affordable housing not being run properly by your government.

Why this hasn't blown up as the scandal that it truly is makes no sense at all. The reports coming in on the confirmed and established criminal behavior from NYCHA from the top to bottom to Mayor de Faustio is not having the effect it should have. This is the 21st century and there is still inequitable funding and heinous neglect and incompetence that resembles anything from the classic Dickins novels to Jacob Riis chronicling on poverty and blight on the poor.

These fixes should have been remedied back in the fall, especially the with the uncharacteristic warmth that the city had last season.

But it's clear that other things were being prioritized, like city planning coordinated functions with the predatory developers for invasive incongruous new development on NYCHA properties, the promotion of the BQX line and all the time the mayor pissed away campaigning with his bogus city hall tour.

Strong statements have been uttered by P.A. James, Public Housing toady Councilman Torres, and the hardly comptrolling Comptroller Stringer on this current NYCHA failing and de Faustio actually materializing to the housing projects to mollify tenants but it's too fucking late now. Even the tenants see through de Faustio's false promises as bullshit and the pathetic optics he's trying to cultivate.

I disagree that these people came out to vote, I think they didn't because they are part of the 76% that feel that their votes don't do dick. This is truly a/the new depression.

You get what you pay for?
A Nigerian is the NYCHA Commissioner, who did not come up through the ranks.

georgetheatheist said...
This comment has been removed by the author.
Saturday, January 06, 2018

it's amazing that as horrific and decrepit these units are, there's still people waiting to get in. Drugs, crime, filth, mold, freezing temps, vermin, nothing keeps these apartments vacant. This could be a way of getting the poor out of only for the rich NYC

Ha ha yep it's the R,s that are heartless. The Dems are on what? The third generation of people dependant on the Govt for everything since LBJ's Great Society, and The War on Poverty. Yep dang republicans.

"it's amazing that as horrific and decrepit these units are, there's still people waiting to get in"

#me too, Jules. and for the fraudulent token units in those fancy new towers by the waters.

This is the real affordable housing not being run properly by your government.

Why this hasn't blown up as the scandal that it truly is makes no sense at all.

I agree WHY isn't this the big scandal that is should be. I mean this, then the whole lead paint, the criminal activities that go on in these place, the gangs. While not quite up there with the Flint Michigan poisoning of the water by a Republican Governor and his cronies, THIS IS STILL BIG. Where are the liberal Democrats coming out on this, where is Rachael Maddow playing this every night on her MSNBC show and then Bernie Sanders stands by his side for his inauguration.

If this exact same scenario was going on and the Mayor was a Republican, can you imagine what the Democrats would be saying, but NOW, they all keep quiet on this HUGE STORY.

NOT that any of this gives a pat on the back to Republicans who are complete assholes on the majority of issues, if not all. BUT come on DEMOCRATS, it is time to start to weed out bad Democrats & Republicans.

This mayor isn't really any progressive. NYCHA still sucks and recreational pot is still illegal under his watch. He only seems slightly more liberal than Bloomberg.

Supposed to work on paper, but sucks in reality.

This is the New World Order. Hire people that have no business doing the jobs they are assigned to do. Brainless idiots have jobs that otherwise intelligent and knowledgeable people should have and they keep their jobs. It's a cancer in all industries.

There are plenty of bright, intelligent people in this city that are unemployed/under-employed that could run circles around these idiots and get the job done. But the New World Order has no room for intelligence and honesty.

Hey, its great to see Jimmy in that part of his district! Really!!

Every year there is a July 4 Reunion and the kids burn CRATES of fireworks in the middle of the street stopping traffic including buses. This goes on until the wee hours of the morning. Its so bad many of our neighbors stay at friends houses.

Well some of us called Jimmy's office and got NO RESPONSE, sent letters and videos to Jimmy's office, and got NO RESPONSE (you do not count his junk mail that features his Smug Mug dozens of times as a response, nor does his community count his junk emails asking us to participate in his laughably rigged juvenile Participatory Budgeting, a process that requires drawing posters with magic markers and offering bowls of candy and is a throwback to 5th grade).

In any case, you cannot imagine the shock, I TELL YOU SHOCK! to see Jimmy and flunky in tow coming out of the subway station en route to the Woodside Houses. Then it hit us as to how to get this young lad's attention.

Be the part of a large voting block - live in an area that is about to be converted to millennial housing and where the local natives need to be lulled to sleep as their leadership is being bought off only to awake under the glare of eviction.

People in his district just cannot wait until he becomes mayor so THE ENTIRE CITY can share in the wealth!

Actually this is just as BIG as Flint because even though those appointed Republican technocrat scumbags in Michigan got caught, some of them actually got convicted. While the NYCHA commissioner and high level administrative staffers blatantly lied and are still lying even with an appointed monitor and are still mismanaging public housing as the mayor diddles and whitewashes their and his criminal neglect and what has been obvious from the beginning their procrastinate duties for the buildings upkeep and environment.

A Nigerian scammer?
can you say that?