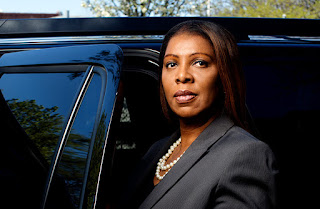 Whitestone residents upset with the controversial Waterpointe brownfield cleanup may have an influential new ally.

Public Advocate Letitia James said she would help in the potential launch of litigation over the situation at the We Love Whitestone Civic Association's meeting on Wednesday night.

"I'm prepared to seek and try to find a law firm that will represent you in your interests," she said. "This is totally unacceptable."

The Edgestone Group, which conducted the cleanup, plans on building 52 single-family homes at the property. The firm could not be reached for comment.

Many in the community are upset with the Department of Environmental Conversation over the project, because the agency agreed to let Edgestone pursue a different cleanup method than first planned. Rather than the Track 2 residential cleanup that was originally planned, the developer conducted a Track 4 unrestricted residential one, which is less stringent in terms of the chemicals allowed at the site.

The DEC issued a certificate of completion for the cleanup last month.
Posted by Queens Crapper at 5:21 AM

So basically James is a secretary, filing a lawsuit. SO why do we need this position and office, which cost tax payers much money. Explain what this office does. It seems make a top ten worst landlord list and file a lawsuit. Actually one person can do that at half the salary, a public advocate office is not needed for that.

ROLE OF PUBLIC ADVOCATE: The job of the Public Advocate is, most fundamentally, that of a watchdog, ensuring that all New Yorkers receive the City services they deserve and have a voice in shaping the policies of their government.

Now does that sound at all like James or deBlasio, when he is PA. NO, not even close. A watchdog. How can you be a watchdog of government, when you are in bed with government.

James is an attorney, isn't she?

She's just another opportunist trying to fill her pockets

Yes, James is an attorney, but obliviously not a good one, since is Public Advocate, another one of this city's government welfare positions. What is the old saying, "those that teach, teach, those that don't teach gym."

Seems as if the 'machine' wants a little reinforcement to get some headlines that the 'boys' actually care about us.

This issue does not seem consistent with James' general interests. It sounds like she is building up credentials for the next mayoralty election.


She will also be our next Mayor.

Whitestone will not see nor hear her again until the next election.

She didn't do shit for the citizens in downtown Brooklyn and Prospect-lefferts about the tower pestilence in Atlantic Yards/pacific park after promising them transparency and local jobs from Ratner, so expect the inevitable disappointment here.

Here's something else about the habitual futility of Letitia James and the absolute uselessness and irrelevance of the public advocate office. And it's fucking recent too. She basically was responsible for the eviction of 75 residents from a bowery slum apartment building where the scumlord refused to fix the staircase. The so-called public advocate dropped their case back in 2016 and left the tenants to fend for themselves.

So watch out Whitestone, she's just trying to pad her resume.

The real hero’s here are Al Centola for
Bringing this to the community and pushing for actual facts.
Rob Loscalzo (who gave an amazing presentation)
We Love Whitestone Civic Association
Senator Avella
Dr. Cervino (not as good as Loscalzos presentation and the dumping happened on his watch while community board 7 environmental chairman! so maybe not him)

"Those that can, do, those that don't teach". The misquote must be from a teacher. Any surprise teachers get the lowest SAT scores of any major?

Wasn't that the old Grace/Edenwald asphalt plant? Is asphalt that toxic?

Thank you but both Robert LoScalzo and Dr. jame Cervino deserve all the credit. LoScalzo was , as always on point. Cervino has been on this from very beginning and was very clear about the dangers. Please let’s not diminish the roles of anyone involved.