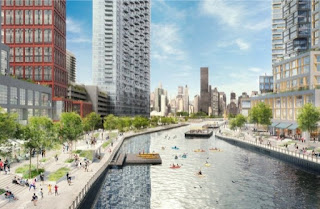 U.S. Rep. Carolyn Maloney (D-Astoria) reviewed the draft scope of work proposed by Plaxall that within 15 years would bring a 65-story tower; 5,000 residential units spread out over eight buildings, with 25 percent set aside for affordable housing; manufacturing and office space; and an esplanade to make Anable Basin accessible to the public.

“Anable Basin is currently a gloomy industrial area with limited roads, limited access, sparse public transportation and very little retail,” Maloney said. “We have seen the success of Queens West and Hunters Point South in Long Island City and in Northern Brooklyn. And it is time for that trend to reach Anable Basin — an extraordinary area with magnificent views of Manhattan and the East River. This rezoning has the potential to create another great neighborhood, if it is done right.”
Posted by Queens Crapper at 12:44 AM

These developers and the cajoling city planners doing their bidding have clearly lost their minds. It's a monstrous waste of tax dollars to even have these discussions.

Congresswoman Maloney knows damn well this will be disastrous too and she comes off straddling the fence here. Plaxall should be offended and soundly rejected.

She really needs to go. Cheer leading more development without asking any questions at all... and I'm not even talking hard questions here.

First of all, development is fine if its used in a proper context. Here, it is not.

In plain English, she cares nothing about your problems with the direction of the city, state or country. All that is important is her career and the donations that hijack the city resources for her donor's benefit.

The target of your ire should be all the fake civics, newspapers, community boards, and blogs that support this.

You don't have much time.

The are importing a new electorate that knows or cares nothing of the American system of citizen participation. Think of all the nasty things the Democrats say of Trump.

Its the pot calling the kettle black. As they say, suspicion of others arises from a knowledge of one's self.

Is the water as toxic as it is in Newtown Creek? Given the history of the area, any inlet from the East River would have an industrial history.

Of the course the developers will be looking for ridiculous tax abatements that the rest of Queens will have to pay for.

Sounds great! I'm sure transportation infrastructure will be put in place first, right?

IDIOT. And what about the already strained to the limit infrastructure? 5,000 more cars, more people using water, sewage, electricity? 5,000 more people crowding the sidewalks. Sending their children to already maxed out schools? How much did DeScummio pay this fool to say this, because "Pack 'Em In Til It Hurts" certainly sounds like a page from his book. They don't care if the quality of life for everyone goes down, so long as the balance in their personal financial accounts goes up.

Why is she identified as (D-Astoria)...she lives in Manhattan

I've been to the lone eponymous bar there. It's got nice views, but is terribly overpriced and mediocre.

There's nothing there, and it's already sandwiched by hi-rises on either side, and the useless "office of pupil transportation" on the feeder road.

LIC residents, I'm sorry for the old ones, but the new ones can suffer for all I care - I'd rather have 5,000 MORE people OVER THERE than OVER HERE.

Most nice areas in Queens are realizing that in order to left alone and insulated, LIC (and parts of Astoria, sorry) need to be the sacrificial lamb, simply by dint of occupying Manhattan-facing shoreline. It may never end - but those places will get the worst and heaviest of it, and spare the rest of us at least some misery.

And when the existing elites in their Vernon blvd glass towers realize they really didn't want to so many new neighbors, I'll be laughing behind my smile. They got what they richly deserved.

It's like those people in the towers just two or three streets in from the shore - now their views have been blocked by newer ones, just in front. YIMBY's and their idiot apologists and representatives - the sad truth is, most of them will never be exposed to the problems they create.

This was the woman who showed up at a Dutch Kills community meeting called to demand she do something about the destruction of their community and she is so tone-deaf that she bragged about all the money she is bringing to the community -- with the East Side Access.

Like most people of her ilk, totally tone deaf, her staff is malicious and nasty. When you see that nitwit in the White House you can thank the rank and file of the Democratic Party in Queens for putting him there.

Another interesting point: this is the only community in Queens that is getting more white. Exposes the sham of the 'World's Boro' as something touted only as a means to get money flowing into the Democratic Party coffers from around the world.

These people are bat shit crazy and reckless, this all appears to be approx 20 car lengths from the Steinway tunnel.
An engineering assessment needs to be done with independent engineers who are not on the payroll or in cahoot's with the project. (nor shitty MTA hacks)
It could compromise and cause massive Massive irreparable damage, that Steinway tunnel is 100+ years old and the eastern side sits on mud and crushed dumped rock. You cant go hammering (months of pounding) 100s piles into the bedrock.

How do you think she got all that dough?

Representative Maloney has an estimated net worth of $26.5 M as of 2014, making her one of the wealthiest members of Congress and third among all members from New York.

Maybe she can get excited about improving the infrastructure too? For some reason I don't think that will be the case.

You mean 20 automobile (car) lengths form the Steinway tunnel (around 300 feet)--I doubt this project can happen because it can not proceed safely. I dont give a shit what this woman or the mayor says.
They are both f-ing idiots in cheap suits best suited for Halloween story.

Doesn't sound inclusive to me. What about diversity and tolerance and all that good stuff that Queens electeds are always touting?

Other than federal projects, what does a House Representative have to do with this?

Doesn't Plaxall have a relationship w the LIC Community Boathouse ?

The last time NYC seriously overbuilt we got the Harlem ghetto. This will happen here.

After the inevitable global warming flood not only bathes the area in a toxic soup, but opens up all that gunk 'remediated' in the ground under plastic and few feet of dumped construction landfill, wait until a desperate speculator, suddenly finding it impossible to fill his units, brings over to America his homeboys to move in.

Can you see the stampede to get out by the white folks when their new neighbors bring in their 'Queens Values' and start littering the 'community' areas with feasts of pungent rat-burgers, noisy conversations, loud music, and kids bellowing at each other as they run around?

Never forget what one immigrant told me: "I don't like lawns. They remind me when we had to clip and trim them for the British colonials. I like dirt. When it rains, garbage disappears into the mud." That is the future of LIC folks.