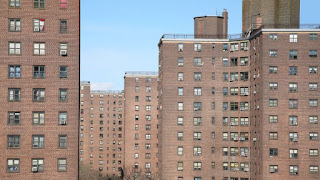 On WNYC, de Blasio was asked how NYCHA was handling its pervasive heating glitches, and downplayed the issue.

“As the problems have been occurring, we've been getting the heat back on in each development. There are still a few, for sure, that we have more work to do,” he said.

The mayor conceded there were “some developments right now that need heat restored,” but that usually NYCHA can fix the problem in a few hours.

But over the holiday weekend and throughout the frigid week, entire developments across the city found themselves without heat, some for days at a time.
Posted by Queens Crapper at 8:36 AM

In just a week, de Faustio has established what a untrustworthy lying scumbag he is. As for NYCHA, well everyone knows their sordid history but what seems to be happening now sure looks as vindictive as the heinous criminal efforts of the illustrious cabal of scumlords that have tried to and eventually forced low and middle income tenants out of their apts via hazardous construction and especially with refusing utility services via lame technical excuses.

There should be no more hesitation, the resignation of Shoya Alotoye must be demanded and done. As for this stupid fucking idiot mayor, there should be demand for his dumb ass to step down also and let him go and fulfill his presidential aspirations.

Even if it means that Letitia Adams becomes mayor much to the chagrin of a majority of people that read this blog daily. She recently called NYCHA's wanton neglect immoral, let's see her live up to those words and do the proper public housing administrative house cleaning.

For a Republican they would be marching in the street with these issues.

For a Democrat it is ho hum, business as usual.

I feel bad for the people residing in Public Housing, however, the majority of them voted DeBlasio in for a second term. You get the government you deserve.

So exactly how is dickBlasio considered a progressive liberal. I mean this has the smell of a conservative uncaring non-progressive, who obviously does not care about the poor, the working class, the middle class and especially people of color (except if they are an ILLEGAL immigrant).

He has been a MAJOR DISAPPOINTMENT considering the platform he was running on in the first election. AND so not held accountable for all his bullshit and actions. AND did you ever hear him once say he was wrong. An egoistic as well.

As I said before he is the Democrat Trump.

If DeBlasio was a Republican the media would be in a frenzy mode calling him a white supremacist alt right extremist for allowing poor minorities to freeze in their homes. What a prick. Since he is a Democrat and a high ranking politician in the DNC, the media is keeping quiet. Anyway he is doing minorities and people who are economically disadvantaged no favors constantly bending over to developers who want to turn Brooklyn and Queens into an extension of Manhattan and populate it with over privileged hipsters and yuppies. Great way to help poor minorities by making this city so expensive the poor can longer survive.

The projects were a poorly thought-out stop-gap measure never properly phased out and replaced with quality housing, and worse still, never maintained, and perennially abused by its management authority. Only created because Moses felt obliged to stick the poor (and often non-white, though in those days that could include Irish too) whose small homes he destroyed for highways and such elsewhere....

Ironically, the issues they were supposed to solve ended up just INCUBATING and PERPETUATING a whole 'nother set of problems. Instead of being "for the working class", they just became low (no) income housing.

Basic sense, decency and just a fraction of foresight: neighborhoods stay strong when they are cohesive, integrated, self-sustaining and insulated from shock. Project towers (and tall buildings and giant infrastructure projects like highways in small-scale 'hoods) by their very design lend themselves to none of those qualities with regards to connecting to the outside community, because they themselves are already self-contained communities unto themselves. Broken, dysfunctional, backwards and isolated, eventually the problems building up inside spill out and becomes "everybody's problem" on the outside.

From the beginning each administration seems content to ignore these problems, akin to walling off a bare-bones room in a building with leaking plumbing and faulty wiring, and pretending that since the rest of the rooms are better kept, everything is OK.

As we are stuck with the precedent set by these megaliths, at very minimum they should all be brought up to snuff. I knew people growing up in Section 8 - like any group some were good and some not, but the whole point was to MOVE OUT and MOVE ON, eventually. Now they have been made terribly appealing by the dint of their "affordability" so there's a perverse incentive of never wanting to do either, constrained by ambition, motivation, and finances. They are wells of voting blocks Dems can draw on, and so they remain.

Turn them into co-ops, as with the Forest Hills 108th, which eventually evolved into something benign (essentially, a retirement community for old pensioners to stay in the community).

If NYC was ever meant to hold so many hundreds or thousands of people in a single, sole, tall building, it was definitely in the likes of your typical NYCHA project.

Re some of the viewpoints above, I don't think that people freezing in their apartments in single digit weather deserve potential illness or death because they voted for DeBlasio. Yes, he's a jerk, but we need to have enough humanity to empathize with people in horrible situations like these.

When people either don't vote or vote party line instead of candidate, they get idiots like this for two terms. NYer's truly are the dumbest voters.

It's hard for me to feel bad for people who pay such little rent for generations -really - Welfare, the taxpayer foots the bill for their NYCHA rent. They think they are entitled to these apartments for eternity because of slavery. Or because they will riot, loot and burn if they don't get these nearly free apartments.

I could care less if the convicted felons and recently released from prison cons are freezing. By law, as convicted felons, they should have been evicted from NYCHA apartments. They remain to destroy any quality of life for other tenants. Who's fault is that? People like DeBlasio's.

No one is crying for me or interviewing me on the news when I don't get heat, hot water or other services.

Little Wilhelm gets a pass with NYCHA because his wife is black, his children are half black. If he weren't married to the former radical lesbian they would be up in arms.


"I could care less if the convicted felons and recently released from prison cons are freezing. By law, as convicted felons, they should have been evicted from NYCHA apartments."

People who live in city housing don't have heat and are living in dangerous unheated buildings in zero degree weather. This is disgusting.

How or where does his crap about convicted felons come from?