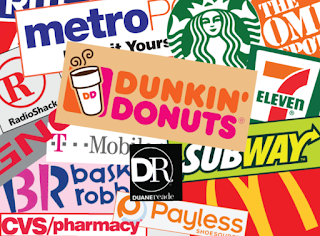 The presence of national chain retailers in the borough expanded by 0.9 percent in 2017, a Center for Urban Future report has found. It went from 1,665 to 1,680 stores.

In its 10th annual “State of the Chains” analysis, the CUF said that 34 new MetroPCS stores opened in Queens, making it the second-most pervasive chain here with 122 total locations. The city and borough’s top spot still belongs to Dunkin’ Donuts, which added eight new Queens stores in 2017; it now has 187 of them.

The report defined the national retailers as businesses with at least two locations within the five boroughs and at least one more outside them.

Every borough except Staten Island, which saw a 1.9 percent decrease, saw a rise in the chains. Queens and Manhattan tied at 0.9 percent, though the number of national retailers added was higher in the latter because it has more of them overall. Brooklyn’s increase of 3.1 percent was the biggest, with the Bronx at 1.8 percent.
Posted by Queens Crapper at 5:37 AM

What the heck is that?

Who pays their budget? How much of it is taxpayer financed?

They can never think of anything better to put up because the damn spaces are too small to put up anything fun! I personally would love to see more fun attractions here but there is no room for it and it would be ruined anyway by the low class trash we have here anymore.

The crappiest of crap retail chains. You cannot do any worse that Dunkin Donuts, Baskin Robbins, 7 Eleven, three reasons for obesity, diabetes and bad taste. Hell most Dunkin Donuts are already combined with Baskin Robbins the American Idol of Ice Cream/Donuts, bland, tasteless and all flavors taste the same.

You can't walk around Jamaiaca Avenue without seeing a Dunkin Donuts, McDonalds or Subway every 2-4 blocks.

A slight change of subject - went out today and didn’t see ONE bike or illegal on illegal electric scooter in the bike lane on Queens Blvd.

Yeah well they might love "Chains" because they sure as hell make it as difficult as possible to be a successful small business in Queens.

not surprising? only chains can afford to take the loss on insanely-high lease places. Look at Austin st.

This is both a private-enterprise/capitalist failing AND one of the gov't (backed by REBNY).

Rampant greed + limited RE = this situation

This high salt garbage lab food engineered to be addictive should be banned like illegal drugs to slow consumption down.

The $$ cost in damage to people health is going to be so astronomic the country will have no choice but move to a Scandinavian socialism system to pay for it. Hospitals and doctors waiting rooms will look like trauma centers after an #9 earthquake.
Perhaps this is being done deliberately, why, why ?

Now, is anyone truly surprised to see these sights of 'Fake Food Pollution' cropping up, when Queens County itself is the official gateway to The Fourth World?

But, let us FIRST examine the 'Cause & Effect' of all failed political leadership, over the course of the past 50 years, and that should amply explain the fast, fake food joints to accommodate the shabby, detached, transient, gender neutral, hipster cult (of all instant, substandard gratification), especially when all of whom have got their headphones turned way up——and, their IQ's turned completely off!

My urgent message for the new year 2018: Get out of Queens County altogether, fellow Crappers, before our profoundly devalued American dollar becomes completely worthless (currently in late stage progress), and very soon all that'll be left is your feckless 'kakistocracy' of corrupt, entrenched, establishment-rigged, dishonest, dishonorable, disloyal, derelict, unresponsive, unapologetic, unrepentant, unaccountable and less than worthless Queens County city council-liar, assembly-liar, state senator-liar and congress-liar, which is already a mandatory (and decades old!), installation by the two-party-machine-failed duopoly that has all but destroyed all pretense of public trust, ethics, integrity, accountability and transparency——to obliterating effect——and, the public be eternally duped, bilked, robbed, scammed, SCARRED FOR LIFE, and damned!

❝Politics is the Entertainment division of the Military Industrial Comples.❞ ―Frank Zappa

One positive thing about chains is that they pay tax and do no hire illegals.

I happen to like Subway. You get half price on certain days. But it doesn't compare with cherry valley in whitestone or d'ellasandro's in flushing.

I’m 63,lived in the city all my life. I remember when there were very few chain stores. I avoid them,as I do Chinese made goods,as much as possible. Lots of good places for everything,ya just gott look.

Where the fuck can i find a Lowes hardware store in Queens?

I moved down to Georgia, which people consider a "fat" state, um actually its NYC that has the most fat slobs of any place in America, the biggest reason are these toxic chain shops selling over priced junk food, and also the lack of open spaces that allow people to enjoy the outdoors and get some exercise which is good for mental, physical, and spiritual health.
Even back in the relatively better 1990s I read an article saying life in NYC causes depression and psychological problems for youth because of a lack of open spaces and parks for young people to play or exercise. Well its only gotten worse in the past two decades.

Well its only gotten worse.
I went into McDonald's for coffee and WiFi and almost threw up.
This woman had 4 kids, all rather "round" and dangerously obese for such ages shoveling french frys and other crap (i didn't know what it was) in their mouths like they haven't seen food in days.
Giant tall beverages too !!
This was going on all around me and I could not hear one single word of English.
Have these 3 world people ever heard of diabetes and heart attacks ?

No they have not heard of diabetes and heart disease, and those problems are far more common in third world countries than in the West. In the West we got a wealth of knowledge for living long healthy lives, the problem with many of us is that we are often too lazy to follow it. The third world believes in superstition and other nonsense, so they think they can eat bad food and stay healthy or do other stupid things and still prosper. Its also a giant underlying reason why New York City employees are incompetent is due to the fact that so many are coming from the third world and have not integrated into America.
I am not one of those people who will just outright blame immigrants, its the liberal leaders that encourage these immigrants not to integrate and not to become responsible citizens. The problem lies with the liberal elite who allow all of this to go unchecked.

>Perhaps this is being done deliberately, why, why ?

It's the "bread" half of bread and circuses.