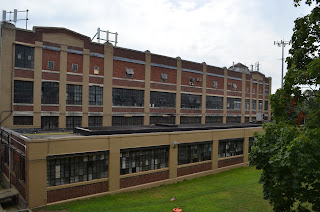 Late on Friday, Jan. 12, a spokesperson for the Department of Homeless Services confirmed to QNS that “there is currently no shelter operating on premises and we currently have no proposal for this site.” Samaritan Daytop Village, the human services organization that was going to operate the Cooper Avenue site, gave a similar statement acknowledging its past involvement and confirming that it “will not be providing any services or operating any program at the Glendale location.”

Records from the Department of Buildings appear to indicate when the shelter plans may have changed. Shortly after it was reported that the initial plans for the shelter were approved, DOB records show that a proposed renovation to the four-story structure submitted by George E. Berger & Associates was approved on April 2, 2015. Over the next two years, there were three amendments to the renovation approved under the same applicant, the records show.

The last amendment under that applicant was approved one year ago on Jan. 11, 2017. Since then, there were two additional amendments proposed in June of 2017 under a new applicant, SW Engineering Company. George E. Berger & Associates is listed as the filing representative on those amendments.

One of those amendments was approved, and the other is still pending with the amendment fee due, records show.

The plan all along was to pretend to renovate the structure into a hotel or something else and then ink a deal with the city to make a mint running a shelter there. I wouldn't get hopes up too high that the deal is dead, although the longer it takes to move forward, the less likely this scenario seems.
Posted by Queens Crapper at 12:34 AM

Glendale geographically can pull a lot of social services work west and south of it from less well served neighborhoods.

drive through it a lot, it's nice in some places, and you'd never know how bad nearby adjacent areas were given how the cemetery and Jackie Robinson wall it off.

the corollary to that is there are parts along Jamaica in the Cypress hills region that are just as nice.

point being, just like maspeth and elm, it's not the mere presence of a shelter that brings a place down, but how well - or not - it's run.

shelters need to be replaced with basic, decent housing and properly managed and secured. they are not a long term solution.

Why does NYC need all these shelters suddenly? Are there that many NYC residents who need to live in shelters, or are people flocking in from less generous states and COUNTRIES to live off of NYC taxpayers' dime? The latter is what I firmly believe. There should not be this many "homeless" people needing shelter. No one owes anyone else a living. These seem to be mainly minority people with several children, no husband, and no real way to support the children they brought into the world. I'm sorry, but I am fricking tired of having to support the lowest of the low, who litter the streets with children they neither want nor can care for, shoving that responsibility on more responsible people. They very rarely make it to the level of holding decent jobs and paying their own bills, and their children each do the same thing their mother did, resulting in octopus like growth of the needy. Where does it end? No wonder people are leaving NYC in droves. Just so long as they can pull the "D" lever in the voting booth, slimy politicians do everything to protect illegals and succor the "homeless".

People get bus'd to NYC to live off our taxpayer dime. It's a thing. LOTS of them come out here just for that. SanFran, Hawaii...suffer the same thing.

Then we try to bus them back...anywhere, but you can imagine how that goes over politically.

There's hundreds of young vagrants who floated in from Seattle or Portland or Cali just living like beach-bums, minus the beach part. I see the same young Williamsburg types all Northwest Brooklyn begging for spare change, usually along the BQE. And lately, I've been seeing a bunch of scuzzy young ladies doing the same. Wow, you all been needing that money for a bus fare for 6 YEARS, huh?

Meanwhile...the same Mexican guy has been down the way has been getting by selling oranges, mangos and juice from the same beat-up shopping cart to passing tradesmen for more than a decade....but idiots ReDUHplicans have a hard-on to deport HIM and not the useless sacks of waste with two working arms and legs with the temerity to rap on your window and say, "every little bit helps, thanks a lot dude!" because he had the inordinate good fortune to grow up without an accent. Dumocrats just want to create a nanny state where no needs to do anything.

Panhandlers come in all stripes, but I never saw any of them throughout Vietnam or Malayasia or Thailand. Certainly not Japan. There were literally people born with fucked up limbs due to Agent Orange, and they were vending small goods or actually singing for their supper, fucking literally.

The closest to that over here is those Asian old ladies who recycle shit, and it take a real asswipe to decry that behavior. I've never even one Indian person bothering people for change, but I have seen some Muslim-seeming women pull that "I've got my newborn baby with me" creepy shit down in Bayridge and Union Square. The blacks who do it seem to be peculiarly Americanized, but not African. African and Caribbean blacks are quite put out if you lump them in with AAs - the ones who got here and got by don't want anything to do with the "natives".

I learned at a young age, any money you "spare" these types just gets wasted anyway. I'd rather spend my dollars to get an ice water from the dude busting his ass on a hot summer day trying to do SOMETHING productive.

The whole system beggars (ha) its abuse by people canny enough to game the loopholes but lazy enough not to want to actually work or produce anything of value. The City just encourages it with shady contracts to giant NFPs that end up just happening to have their buddies on the Board.

This may be a shill too take the heat off.
These sneaky people and city still need to be watched because this is NOT the end of it.
Remember the mayor and who your dealing with here, you can bet your ass the gearbox is being relocated behind DOUBLE DOUBLE closed doors because the mayor hates EVERYBODY in that area, including Bob Holden for ousting his little blue knee-padded puppet Crowley.

Here's a better idea
Obey laws already on the books and allow ICE to deport illegal moochers, so you have enough money and living space to spend on American citizens.
https://pbs.twimg.com/media/DT176vDW0AENxdj.jpg