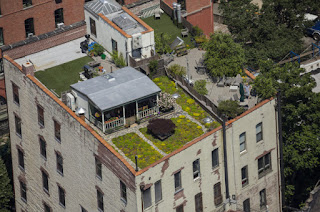 Puchkoff, head of the real estate development firm DP Associates, converted the building from a warehouse into 14 luxury co-op apartments.

But when the Buildings Department inspector visited the rooftop last year, he determined that Puchkoff’s current certificate of occupancy does not allow the cabin or surrounding garden.

He was fined $1,200 and told to apply for a new certificate of occupancy.

A city administrative law judge tossed the fine in April, but then the Buildings Department had it reinstated on appeal in September.

So Puchkoff sued the agency to have his little slice of country comfort in the Big Apple declared legal.

His attorney, Richard Lobel, said the fine was based on a bogus complaint. He added that the DOB even signed off on the project twice, most recently in 1999.

I really wanted this to be legit because I think that's cool as hell, but there don't seem to be any permits issued for that structure.
Posted by Queens Crapper at 12:54 AM

See? All this high-rise living is not psychologically good for the human soul. Here we have an atavistic need displayed for mankind living close to the earth.

That is so messed up.

Just make him get insurance to cover liability for leaking, structural damage, etc. That will make him close up shop.

It is currently encouraged to have buildings "LEED" certified showing sustainability and environmental responsibility, along with many other environmental and efficiency requirements.

One component is a so called "green roof" that this structure obviously has.

There are too numerous buildings with multiple safety and structural violations that are not addressed.

For some perverse reason this owner is being targeted and to be made an example of.

When the law is blind and equally applied there is liberty!

An unequal application of the law in a vindictive manner is of course tyranny!

Perhaps the campaign contributions were lost in the disorder of the United States Postal Service's muddle.

Remember:
"All animals are equal, but some animals are more equal than others" - George Orwell...

it was approved. someone at dob is jealous. if the roof can support the weight, who cares.

That would make for a great owner occupied apartment. Just put up some fencing.

Anything someone does to improve their quality of life will be met with stiff resistance by the city of New York. This same city has no qualms about destroying a park to make way for a new mall or condominium. Well that is the way this city works, and that is why so many middle class residents have fled to the suburbs and other areas of the city. If you are an ordinary citizen, you are a nobody in the eyes of the city.
That being said if you want country like tranquility, you are better off leaving NYC for somewhere else.

It great to cover news outside Queens, here, God knows how much people in Queens need to know what is going on elsewhere - how about some pieces on how the city council people and Albany reps in Brooklyn and Manhattan support and fund community preservation efforts, in direct contrast to Queens where they cut support, ignore, or set up sham community groups that are simply mouth pieces for the same initiatives.

The giant ugly box building is landmarked. You're looking at the back of it.

Not terribly impressive from the front, either.
Is there any particular reason that building got landmarked when much nicer buildings here in Queens don't?