Several residents have been displaced on a bitterly cold night Monday when a fire ripped through an two-story house in the South Ozone Park section of Queens.

Firefighters responded the blaze was under control as of 8:30 p.m.

Around 15-20 residents have been displaced.

No injuries have been reported. 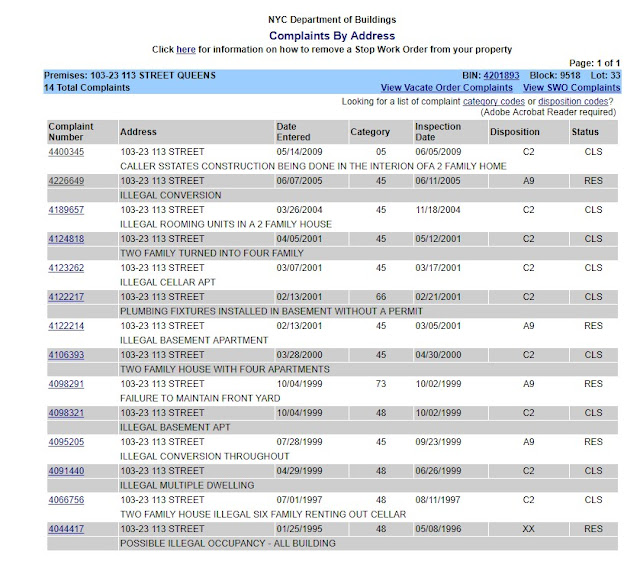 Surely, this history had nothing to do with it.
Posted by Queens Crapper at 6:56 AM

A murder-suicide and a fire on the same street in the same area. This is some start to 2018.

Careless and uneducated 3rd world immigrants are bad news for what once was a solid and law abiding community.

It is the ghetto SE Queens Wild Wild West, where people do whatever they want and the city agencies always look the other way. A deadly combination.

I feel sorry for the law abiding people in these areas that have to put up with the bottom barrel folks and this so-called NYC liberal progressive administration (which it is NOT) that does so little for such communities, like enforcing LAWS. It is places like this that really need LAW & ORDER, not some bullshit hands off approach.

There is a reason why fires happen so much in place like SE Queens and Bronx. While the Bronx is burning, SE Queens is right behind them in many ways. Richmond Hill, South Ozone Park, South Jamaica, Jamaica, Queens Village, Hollis, St, Albans (once nice), ALL CRAP and spreading like a California wild fire.

He who can, does; he who cannot, teaches, all the rest work in city agencies.

Good to know that it only took since 1995 for the situation to be resolved.

Depends what part of SEQ you're in, Moretti. Hollis is largely alright: mainly, because the Indo-Guyanese there sought out UNattached housing - we like having our neighbors no closer than 20', if any at all. The more people you wedge together in tight confines, the more problems you will have! The opposite is generally true...

My Uncles/cousins have been out there forever; no fires AFAIK in more than thirty years have I ever heard of from them. Though, there are any number of basement conversions (usually to house in-laws), but in they got them overseen by professional plumbers - especially when gas is involved.

In my neck of the woods, color me surprised to see wooden panels going up around a nearby single-family detached home describing a legal 1-to-2 family conversion :O! It's still sad to see that, but at least it's not being slap-dashed together. And it definitely isn't the ONLY conversion going on, I'd guess for having seen that one, maybe three others got done without the required precursors.

The truth is, a lot of homeowners dislike inviting opportunistic busybodies into their homes, unwisely opting to manage a major project on their own, only to run into trouble later for not having gone by the book. The key is having real professionals whom you're friendly with and find trustworthy to supervise as necessary. Ounce of prevention, pound of cure and all that. Partly the rules are there to avoid property damage, but let's not kid around - a lot of those rules are in place to protect sanctified trades but to see to it that the City knows if you so much as hang a painting or drill a hole, all the better to charge you even more property tax for it!

This is ultimately an issue of grab-a-buck scofflaw-ness, combined with unprofessional DIY-ism as seen in the LES gas explosion. I'd venture that a few cases are formerly single-resident occupants deciding they should convert to take in renters as a supplemental form of income (the better to shoulder the property taxes only the Big Boys and the Poor-poor get out of paying!)

Let's face it and most everyone knows this, but the new immigrants that are coming here are not the immigrants of when my family came here. First these new immigrants are coming from third world countries (Bengali, Indian, Pakistan, Middle East, parts of Africa) that are a mess and they are just repeating all the crap that has made their countries such a mess by just repeating the same behavior and actions and essentially turning what was once nice communities into mirror images of their slummy communities of their home land (garbage, shitty apartments that are built, cramming 100 people into a two family home, etc.

The immigrants of yesteryear came for a better life like even these new ones, BUT they respected their new country laws while still holding on to their culture. My family had an outhouse in the old country, but did not put an outhouse in the backyard when they came to the USA.

AND to make matters worse this city DOES NOTHING to stop such behaviors as illegal conversions, paving over green and throwing dead people's crap in the river, like the Hindus folks do (India has the most polluted bodies of water in the world).

BUT of course the powers to be will never mention that, although I did hear on a news video on Jamaica a few years back, Yvonne Reddick of Community Board 12 state "We need to teach our new immigrants on proper behavior".

THE ONLY THING THAT MATTERS IS THEY VOTE DEMOCRATIC, GET HIRED FOR DEMOCRATIC PROGRAMS, AND DO NOT GET INVOLVED WITH MESSY CIVICS ISSUES THAT EMBARRASS DEMOCRATIC POLITICIANS.

IF THE MAN TELLS YOU A TREE IS A TIRE, ITS A TIRE. KEEP YOUR HEAD DOWN, YOUR MOUTH SHUT AND YOU DON'T GET SHOT. BUILDS GREAT TRADITIONAL AMERICAN VALUES, EH?

>last violation was 9 years ago

Not really a smoking gun

Shit nabe do nobody's required to care about residents safety. Now, if this were Douglas Manor!