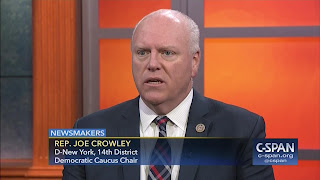 As U.S. Rep. Joseph Crowley (D-Queens) begins a reelection year, a real estate-backed housing group has expressed political support for his housing proposals. An election year platform put forth by U.S. Rep. Crowley, named, "A Better Deal for Queens and The Bronx," includes a proposal to offer tenants rent relief in the form of a tax credit. U.S. Rep. Crowley has received political support from the real estate-linked group as published reports have revealed that he is relying on real estate developers as sources of donations to three of his political committees.

The group that is backing U.S. Rep. Crowley's housing policies, the New York Housing Conference Inc., is a real estate developer-backed nonprofit group. Its Board of Directors includes Mark Willis, a senior policy fellow at the NYU Furman Center for Real Estate and Urban Policy, a political think tank that is funded by real estate developers. Its Advisory Board includes Aaron Koffman from The Hudson Companies Inc. and Ronald Moelis from L+M Development Partners. The Hudson Companies Inc. was briefly the subject of a probe in connection with a reported Federal corruption investigation after the de Blasio administration agreed to sell the Brooklyn Heights Branch of the Brooklyn Public Library to the politically-connected real estate development firm. L+M Development Partners was one of the real estate development firms that invested in a consortium that, in turn, bought, in secret, a portfolio of project-based, Section 8 apartment complexes from a cash-strapped New York City Housing Authority.

The tax credit that U.S. Rep. Crowley is offering tenants, which is the key provision in the Rent Relief Act (H.R. 3670), stops short of regulating residential rents paid for by tenants. Instead, it forces the Government to essentially subsidise the upward spiraling rents paid by tenants by giving tenants a tax credit for rent paid in excess of 30 per cent. of a tenant's income. Separately, U.S. Rep. Crowley has expressed support for the Family Self-Sufficiency Act (H.R. 4258), which would advance the Government's receding commitment to public housing under the New Deal-era law, the Housing Act of 1937 and, instead, place more emphasis on the Section 8 housing voucher program.

Rachel Fee, the executive director of New York Housing Coalition Inc., did not immediately answer advance questions submitted by Progress Queens for this report. Lauren French, a spokesperson for U.S. Rep. Crowley, did not answer a press inquiry.
Posted by Queens Crapper at 6:52 AM

These tax credits are nothing but two-bit trickle-down bribes.

Seeing the Moelis name is an eye-opener, for this guy's firm got a massive push for the luxury affordable housing plan from de Faustios's fixer Alicia Glen (another technocrat that the lying mayor insists on having around, despite the wreckage she is laying on long-time and poorer residents)

These people must be stopped, or there will be a lot of people living in homeless hotels in a few years. Or they will just move out.

That site is a better quality source of information than most, Crapster; revealing, detailed, and clearly explained.

The proposed subsidies do no address the core issue of reining in demand by increasing a core supply of decent, affordable, non-luxury/sky-high housing. Instead, it is a patch on the "upward spiraling" effect of rents described - simply a boon to developer-landlords.

Modest regulation of some rents, in conjunction with a lowering of property taxes, and an end to tax abatements, is a 3-pronged approach that would prove more robust than simple subsidies, which do nothing to change or the halt the direction of artificial outside forces constraining supply, and inflating rents.

that Crowley sent an email to every drying the ..... er poor mail service (which he must have thought resonated with everyone as he use it as a fund raising email),

that Queens Civic Congress wrote a half page essay in the local press not about illegal conversions or bike lanes, but ... um .... poor mail service.

Queens is a zooie place. Real 'Civics' do not parrot politicians even its a stupid topic.

Interesting how honest Joe Crowley scouts out the one in 689,800 DACA (a senior from Peru at John Jay School of Criminal Justice) as his poster boy intern and hands us the remaining 689,799 useless future problems, sec 8 lifers & gang members.

This bring new meaning to the New York term "Cream Of The Crap"
What happened to honest Joe's talk about "The act of discriminating against selected individuals of a certain race" ehh?

Honest Joe Crowley was on screen for a fraction of a second during the State of the Union. - He was sitting 5 away from Pelosi.

Meanwhile Dems that have served a fraction his term is getting a lot of national coverage. Serving the party is a cruel thing. On one hand he harvests all that money for the party, then they disrespect him by acting like he is not in the room.

I guess collecting stuff from Queens garbage, make you garbage too. The Dems turn with a smile to take his money then turn back to continue their conversation like he is not even in the room. I guess Joe is getting a taste of what we put up with from the hacks he chooses - a taste of his own political culture.

I like to think of the QC poster(sorry don't remember your handle) who has stated several times in the past on this forum that the Queens brand of politics don't play very well west of the Hudson. It's like the National party knows they are incompetent hacks and way to corrupt for the national spotlight.

I think that theory is dead on.

It was Queens politics does not play well west of the East River.

In Manhattan the politicians actually support their communities with moneys to do community building efforts, as opposed to Queens, where they do everything they can to cut communities off from the outside world and use their money allocation to buy mouthpieces.