Congratulations on making it through! 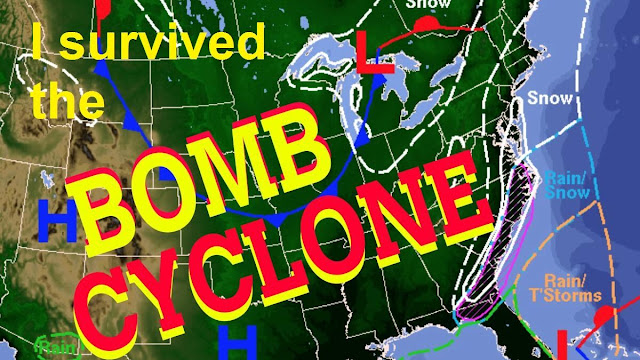 If you're reading this, you're still alive!
Posted by Queens Crapper at 2:26 AM

Sorry I missed it.

It snowed yesterday and was cold. There were some delays on mass transit. Be careful out there.

Oh please so overrated! The idiot news broadcasts act like NYC never seen this much snow before! We went through the same amount of snow last year. And a few years back, it snowed everyday in february....I remember that because I was on jury duty that entire month!

I however did not see any of the numerous and endless stories of the planet's imminent demise due to the so called global warming.

Thank the Good Lord for a nice hot cup of Earl Grey...

Needs to love how the news show people flipping their shit and buying ramen along with salt at Key Food over what is projected to be a foot of snow at most.

It's climate change, dumbass. Everyone with a brain agrees it is a thing.

Also ask the people of Boston if this was a normal storm or not.

(sarc): the "Good Lord" is now in the tea business?

In any event, the Times (yesterday, 1/4) did not fail to attempt to give an explanation that when it's cold, it's due to climate change. Check out the contentious ("importance of the relationship is not fully clear", "it's not known exactly how much", "still up for debate", "an area of active research", "it's difficult to directly attribute") article HERE. (Note the conditional "may" in the title.

Also, exactly 130 years ago this mid-March, the Great Blizzard of 1888 devastated the local area. Check that out
HERE.. A Nor'easter as well. Yesterday's was a walk in the park

Hey don't knock a good cup of tea. I prefer chai myself. Get a GOOD brand like Ahmed, Numi, or David's. That liptop/rose crap is just the dust from the lowest quality leaves pawned off on people who don't know what real tea is.

I shoveled my corner, my sole neighbor's front and backyard, and the guy across the street. Get to do it all again today with my folks in Brooklyn, who, bless them, have 3 buildings with square roofs. UGH.

At least I'm getting my exercise...

AFA as weather (get it) it's climate change, or just climate...only numbskulls would insist there's absolutely NOTHING out of the ordinary about the weather patterns we've observed FOR THE LAST TWO DECADES. Summers are way, way hotter, and winters...are just fucked up, really. Hot one day, cold the next.

In the long run, you and I will be dead, and maybe parts of NYC will be flooded, is it really necessary to knock places like Europe and the Nordic countries for supplementing their power supplies with other sources to better plan for their futures? Last I checked, they seem pretty damn happy with out how things are managed. Like any good investment portfolio management strategy, you diversify.

On a related note, there's really no point to cheerleading coal as the SOLE answer to electricity generation when solar, wind, ocean (kinetic), biofuel, biomass, natural gas, and yes, nuclear all exist, are tested, and can each contribute.

To say nothing of the fact, nothing last forever, and neither will our supplies of coal or oil. Humans innovate by continually experimenting, testing, and refining our technologies for extraction, processing, and provision.

If climate change turns out to be just a "blip" (a blip relative to multiple generations' lifespans), but it still got us to waste less, conserve more, and created a bunch of new industries to boot, and act positively to preserve our world, there is no legitimate reason to be against any of those things.

It was a storm, we've had them before. I got to work, and I got home (although it did take a while, underground subways were delayed because of inclement weather, I won't even bother asking for an explanation on that from the MTA). I mean does anyone remember the epic blizzard of 1996?

Survived what. 1/2 of Little Neck & Douglas Manor still buried and freezing up into cement. All of Flushing and Bayside clear. What gives ?
De Blasio telling lies on TV is an a'O !

Greetings and well wishes to you George, may wisdom and good fortune shine upon you!


I will have to see if I can dig the article you refer to out of the birdcage.

I consider a good cup of tea and so many other things, part of the bounties beyond measure and another gift bestowed upon us from nature and Nature's God.

I have found that a life of gratitude and thankfulness for family, friends and Our Creator help me find peace and tranquility, especially after perusing articles, stories, and comments here.

President John Fitzgerald Kennedy stated: "As we express our gratitude, we must never forget that the highest appreciation is not to utter words, but to live by them."

So, Thank You Queens Crap for all you do!

One of our Comrade Mayor's idols, Joseph Stalin, claimed: "Gratitude is a sickness suffered by dogs."

On a positive note Doris Day simplified it and boiled it down to:
"Gratitude is riches. Complaint is poverty."

Tommy Efreeti et alia: Do you know when the hottest day ever in NYC history occurred?

Check it out HERE. Caused by a "heat dome" from the mid-West. 100 people dead in NYC. Can you imagine this occurred in the days before air-conditioning?

I don't think the people in city housing without heat are surviving at all. This city is still failing its people, NYCHA and the agencies that manage those buildings do nothing and they're not penalized for it. Yet if private property owners don't shovel out or provide heat to their tenants you can be rest assured that they will be fined out the wahzoo and face public shaming.

On another note - Thanks to everyone who helped someone else out by clearing a sidewalk, offering a hot beverage, warm shelter or by some other kind deed in this less than stellar weather.

And the crime rate will go up. Look at the bright side: this cold weather keeps the human garbage and vermin in their houses.

Climate change is more encompassing than a seasonal blizzard, considering the tremendous drop in temperatures from the last days of autumn going into the frozen tundra started on Christmas Day and the next 11 days.

Look no further than the ocean. It's getting harder to breathe down there.

Where is Al "Fucking" Gore, the father of Global Fucking Warming?

8 to 12 inches of snow and the whole tri-state area was in panic mode. I recall much worse winters here years ago, 2-3 feet of snow almost every other day in January in decades ago and the city didn't shut down like it does these days, school was open too back then. This is beyond idiotic. "Bomb Cyclone", great way for the media to frighten the sheep.
Its no wonder this country is going down the crapper, no one can tolerate any adversity, they cannot tolerate a person with a different view than them. Glad to be a hermit, which used to be bad thing, but too many people are morons today.

"It's cold in January? That proves there's no climate change!"

Meanwhile, other commentators are pointing out how it used to be much colder and snowier.