Lawsuit to be filed over Northern Blvd bike lanes 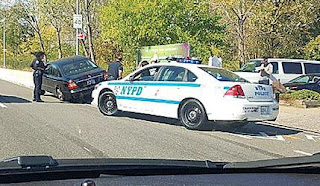 Douglaston Civic Association President Sean Walsh announced on Monday that his group plans on filing a lawsuit against the city over the Northern Boulevard bike lane.

“Our civic, at its annual meeting, decided to sue the city,” he told members of Community Board 11 at the advisory council’s meeting on Monday.

The suit will be against city Department of Transportation Commissioner Polly Trottenberg, Mayor de Blasio and the City of New York and will seek the path’s removal.
Posted by Queens Crapper at 12:17 AM

I'm so mad at this Marxist SOB bastard mayor and his ruining the city shit, How can one donate to this cause and these great warriors behind it ?
I hope more follow with lawsuits! This jackass mayors plan to erase NYC and turn us into Amsterdam has been a total nightmare for 99% the population.

Maybe, just maybe, residents and business owners can copycat the Douglaston Civic Association when they bring suit against the City. Northern Blvd. bike lanes are dangerous.
They have the right idea and it's an idea worth duplicating.

Can we find Civic Associations along Queens Blvd from Briarwood, Kew Gardens, Forest Hills, Rego Park, Elmhurst, Woodside and Sunnyside and exchange these useless Bike Lanes for stolen parking and keep businesses viable along Queens Blvd? Everyone in these neighborhoods from landlords to local citizens will be negatively affected if we lose neighborhood businesses.

Did Mayor DeBlaz think about how important viable businesses are to Queens Blvd. when he decided to cripple motorists? Did he stop to consider the age of the majority of citizens of this area? Most of my neighbors are well over the age of 65 and many are disabled and even if they did use a bike to shop and get around where -- just where in a small apartment would you store a bike?

Bike Lanes are a boondoggle, a big waste of money, and a potential disaster for businesses, landlords and citizens. I hope Douglaston Civic Association is successful and will lead the way for those along Queens Blvd. and Woodhaven Blvd. to follow suit.

I wish this civic group lots of luck fighting this business killing hyper-development enabling and elitist bike lobby pandering inveterate liar mayor. And to any civic group from the towns along Queens Blvd the same if they get inspired by this as M.How said.

Just look at what is going on with that dry cleaner in East Harlem, de Faustio doesn't give a shit and is defiantly beholden to the property robber barons. These bike lanes are the same.

The bike lanes in Manhattan this winter have been deserted.

These bike lanes make no sense anyway. They cut off at the burger king, so what was the point to them to begin with when they only run a few blocks?? The point to a bike lane is for it to be quite continuous and run for some time. These are really just a waste a space and extra money.

The rich residents of Douglaston will have their way. Money always wins in the end.

There is space off the street on both sides of the roadway.
This bike lane was a attempt to slow the speeding drivers down on a roadway that needs enforcement not a bike lane. If any stretch of road in the city needs speeding cameras this would be it. Cars are routinely traveling way above the posted speed limit and hardly anyone getting pulled over and issued a ticket. I know because I live and work in the area.

The bike lanes and restructuring of local roads has made local commuting a nightmare compared to what was before those dangerous lanes. DeBlasio has zero vision and Vision Zero is a failure. Bean counters talk about how much safer it is for bicyclists in the middle of winter when we have less and narrow-as-hell lanes. DeBlasio, instead of improving our lives in the outer boroughs, has made it more challenging. I'd like to see the city respond to,our needs for a,change

What is it with you people and the mayor?

Its the NY Democratic Party that is off the rails.

Where are your elected officials in this mess? Nowhere.

Douglaston is doing what is common in successful civics throughout the city - standing up for their communities.

Most civics in Queens (starting with Queens Civic Congress) are simply mouth pieces for the Democratic Party.

This particular lawsuit might be worth a shot since another poster pointed out- the bike lane doesn't go very far, it has changed traffic flow and apparently caused a number of accidents. The Queens Blvd one (which I'm totally against) is going for a long stretch, is a big nuisance with wasted parking, but hasn't caused any accidents that I heard of and now deBozo has been touting it as the Blvd of Life! So I don't think any lawsuit on that one would have any luck, sadly.

Aren’t the new shortened exit and entrance lanes a violation of the federal highway standards?? Who certified all of this work as safe and in compliance?

My prediction: the city won't remove the cycling lanes but will settle with the Civic for $3.2mm. It's only money, right?