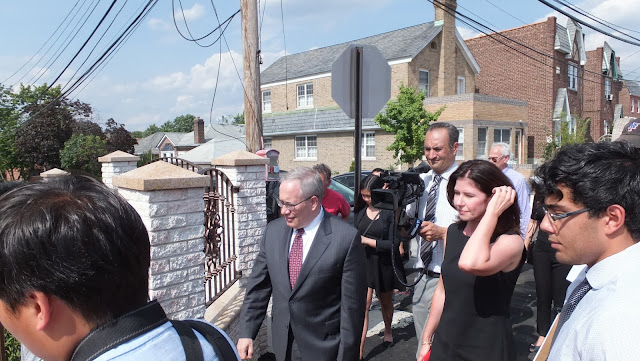 Stringer explained during the walk that the contract between the DDC and CAC Industries, the contractor doing the work, indemnifies the city from being directly sued by residents.
Instead, those impacted by the work are advised to go through their insurance company and that of CAC Industries.

Representatives for Stringer told the Chronicle on Monday that it is standard for the city to be indemnified from lawsuits while it works with an outside contractor who has its own insurance.
Juniper Park Civic Association President Bob Holden — who is running against Crowley in September’s Democratic primary — said in a Monday interview the city’s lack of accountability in situations like these “stinks to high heaven.”

“People have gone through years of hell,” Holden said. “They shouldn’t have to go through their insurance companies to get satisfaction here.

“Why does the city continue to hire these guys? Do they not have many good contractors or do good contractors not want to do business with the city?” he continued. “Are they putting less-qualified contractors into neighborhoods that are working class? Would this be allowed in Manhattan?

In a June letter sent to Calamus Avenue residents, Crowley advised filing a claim with DDC and Stringer’s office, as well as referring to one’s own homeowner’s insurance policy to see if there’s a time frame for filing claims.


...A little more than a week later...
From the Queens Chronicle:

Wu and Guillen were two of a number of residents along the block who tried to file claims with their homeowners insurance companies.

They’ve all been unsuccessful, however. Guillen said she was told that losses stemming from “earth movement” are not covered.

Councilwoman Elizabeth Crowley (D-Glendale) and a spokesman for city Comptroller Scott Stringer said residents with damage to their property should report it to CAC as soon as possible.

“The company contracted with the city on this project is responsible for fixing any and all damages,” Crowley said in a statement. “All homeowners should document and report their damages to both the company and the city.”

CAC did not immediately respond to a request for comment by press time.

Does anyone here know what the hell they are doing or care that these people's homes were damaged by a city contractor?
Posted by Queens Crapper at 7:41 AM

Don't expect any help from Stringer, who despite every damning report on wasteful spending and homelessness exacerbation on the deranged policies of the corrupt mayor, a week ago he stood beside De Faustio and gave the dope from park slope his endorsement.

So this buck passing and run around shit the comptroller is pulling is just and has been standard procedure of the treatment of the residents of Queens, the bastard child borough.

There really needs to be a revolution, it's like these hacks are asking for it.

Blame the Bloomberg administration. During his tenure the city passed a bill making broken sidewalks throughout the city the sole responsibility of of the property owner. That change in the law was a slippery slope and we are witnessing that in another encarnation by the details discussed in this article.

Isn't all that land a former Indian community with ponds and swamps ?

The Indians put a curse on that land when it was stolen from them. Up Elliot ave hill in the 60s before the tall fence I found arrowheads and live snakes in the cemetery.
This may be part of the problem, I remember all them houses reek of funny smell & dampness in the basements too.

The Indians put a curse on that land when it was stolen from them.

Sounds like a plot for Poltergeist III, or IV I lost count

don't worry, Dizzy Lizzy will fix everything
we just have to reelect her

No, its the curse on the ground below all this landfill the Indians cast.
This problem goes back to when them houses were built, even old Fresh Pond station and the tracks have problems. Sometimes you can see ghosts of groups of Indians with sticks sacks of long hunting arrows on back or standing just checking you out..
Several friends and I experienced this hanging out at the old Fremont switch house one hot summer evenings.
--Not a Joke !

Looking forward to voting for Holden.