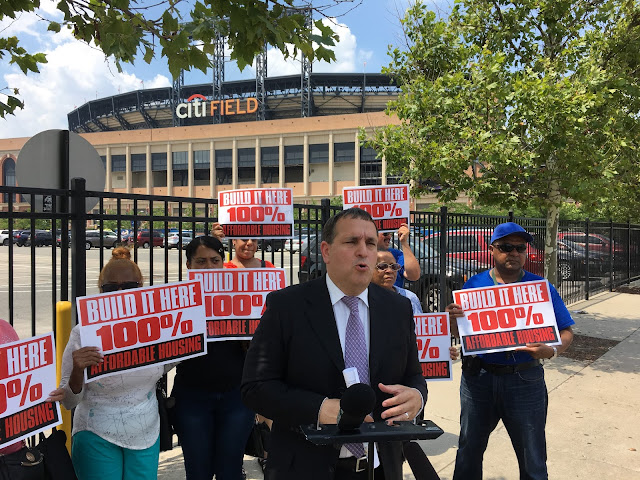 Hiram: “But he does call for the alienation of parkland. So what I’m doing is, I’m helping connect the dots. Trojan horse. This is the Trojan horse plan. He comes out here, he talks about affordable housing, he talks about a new plan, 100 percent affordable – well, 100 percent affordable of what? Is it 100 units? Is it 200 units? I’m saying 5,500 units, right? Point blank. Secondly, he’s already on the record supporting the building of a soccer stadium. In fact, if I recall correctly, I believe he was supportive of the Jets building another football stadium in this park. That’s even a few more years back. Probably around 2008, 2007. The fact of the matter is, that he is very stadium-friendly, and he is very developer-friendly. He is the candidate of political insiders and the rich corporate developers. That’s who he is. That’s not me saying it. I think that if we bother to look even at his campaign filings, both with the State and the City, we’ll see the trail of money that indicates clearly who’s pulling the strings on his back.” 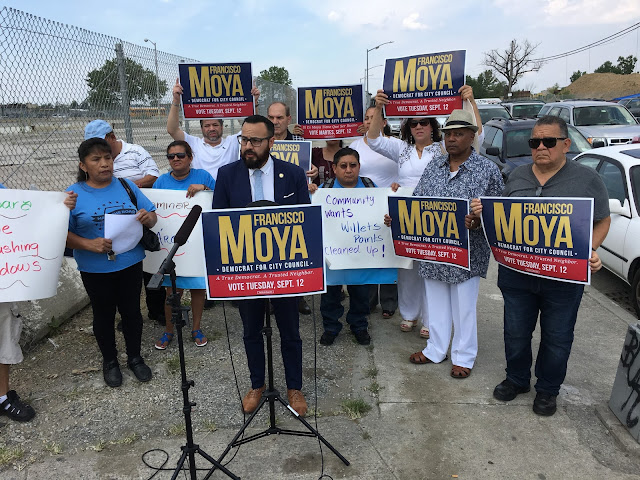 Moya: [On campaign’s prior press release pledging to work with colleagues in Albany to alienate parkland as plan requires] “I’m not in support of any mall being built here. The parkland alienation will always have to go to the State. So we are following what the court has ruled, but I’ve never been in support of a mall. I’m on record for that. So what we have right now is what a court has ruled, saying that we will now have to vote for it in the State, for any type of parkland alienation which is the law.” [After follow-up question concerning campaign’s prior press release, pledging to support, as councilman, alienation legislation by State legislature:] “The alienation will have to go through Albany. We need to make sure that – What we are doing now is proposing a plan that is a plan that is about making sure that we are not bringing in retail here; that is a plan about making sure we’re building affordable housing; that we are building plan that is talking about public and open space; that we’re building a plan that has to do with the remediation and decontamination of this area. That’s what we’re talking about here.”

Moya completely misstated who's paying for remediation of Willets Point land. Speaking about his (Moya's) Willets Plan, he says: "This plan will continue the proposed remediation efforts for Willets Point at the original plan, which included $40 million put forward by the developers to remediate and decontaminate this area." However, the $40 million is merely included in the City's capital grant of $99+ million to Queens Development Group – In other words, QDG would only be "putting forward" taxpayer money given to them and earmarked for this purpose. There is no private $40 million from the developer, contrary to Moya's misleading statement.

The person who spoke at Moya's presser for Make The Road NY was Marta Gualotuna. Googling her name, one finds an article published by Make the Road, which begins: "After learning the Supreme Court deadlocked on an immigration plan that would protect her from being deported, Marta Gualotuna could barely speak through her tears." The implication from Make the Road's own article is that Marta Gualotuna is an illegal alien subject to potential deportation. And of all people, SHE is the sole "community" voice who speaks at Moya's press conference, advocating that everyone support Moya in the election? She cannot even vote! Gualotuna is standing on the left in blue MTR shirt in the photo of the Moya presser.

Queens politics. Just when you thought it couldn't get any dumber, it does.
Posted by Queens Crapper at 12:33 AM

It's easy and absolutely right to be skeptical of his intentions and his pandering to the frustrated and stressed constituency and suspect he will revert to his worst impulses once returning to elected office, but the way he has been bringing up the machinations of the Gentrification Industrial Complex and the useful idiot politicians doing their bidding is very revealing. Hiram, who I don't trust still, is acting like a guy with nothing to lose and not giving a shit about the powers that have literally dominated the landscape with tower pestilence and fabricated market rates.

While Moya makes no bones about what he's about and pimping out a victim of the current immigration kerfuffle and exploiting easy corrupt targets like Trump and even Hiram.

This city has become quite a Twilight zone episode

And the boy mayor while in Far Rockaway yesterday met with the soccer commissioner in the privacy of his mayoral SUV.

Did the Dope From Park Slope think we wouldn't notice???

Boy, does this smell!

if Make the Road by Walking is involved you know it's full of crap.

How many of those people holding signs were just grabbed off the street?

Hey leave 'em alone! Fleecing the public is the only thing they know how to do...

are they hiring to hold up the signs? I could use the money.

LOL! I love the sign holders behind each talking head, in each picture. These people have day jobs? Guess not. They get paid by some minion 10 bucks to show up? Such convincing support.

Moya's politics haven't made areas like Corona, East Elmhurst & Jackson heights any better.
We as Latino's don't just care about one single topic(immigration). We are more broad in our thinking and care about a host of things. For example: 1) Individuals dumping cars on local streets and using our parking spots as dealerships 2) increasing amount of illegal street vendors overcrowding our side walks 3) Rise in local drug gangs 4) Violence in city schools

>are they hiring to hold up the signs? I could use the money.

They only hire illegals.