We sure do love our criminals here 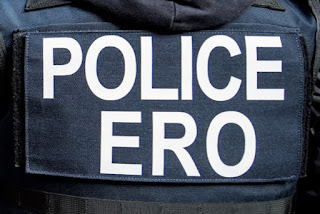 A once-deported Dominican man with a criminal record and felony arrest warrant was recently released on bail, despite immigration authorities requesting that he be handed over to them.

Instead, ICE Enforcement and Removal Operations (ERO) had to locate and arrest Joselin Medina as he left the Bronx Criminal Court in New York on June 16, the agency reported.

Medina has a past felony conviction for the criminal sale of a controlled substance and a pending misdemeanor charge and felony re-entry charge, according to ICE.

“Even a federal criminal warrant issued by a United States magistrate is not enough for the city of New York to turn over a convicted felon to ICE,” said Thomas R. Decker, field office director for ERO New York. “It is unfathomable that New York would create such a public safety risk for the sake of political expediency.”

Medina is now in the custody of the U.S. Marshals Service and is facing up to 20 years in federal prison, after which he will be deported.

And if it was up to Joe Crowley, the sanctuary system will stay in place.
Posted by Queens Crapper at 3:37 AM

I really doubt that if this guy was living in some town in Queens, he would be an upstanding citizen, appearing at community town hall meetings, or even vote democrat.

This is out of control and very disturbing. But the electeds don't give a damn about the chaos they are sowing with the immigration issue in both worthless parties.

“The Republicans’ attacks against sanctuary cities would put Americans at risk by withholding federal funding from cities like New York City to combat terrorism,” said Crowley. ... It is not the Feds that are putting our city at risk of losing $, it is NYC's non compliance with federal law. I hate to break the news to you Joe but the local government has no right to make their own immigration laws.

Just observing the comments of another story on todays "Crapper"

"How NYC protects the environment"

Some of the comments include famous quotes:

There has always been an understanding of equal application of the law.

This was formally codified via The Fourteenth Amendment to the Constitution of the United States!

And today we have Prosecutors Offer Plea Deals to Avoid Deportation of Non-citizens.

Why is it that when an average everyday upstanding family man, legally employed, who is a citizen, is arrested for operating a motor vehicle while intoxicated is charged with the maximum charges possible and given an exorbitant bail for release,

When an ILLEGAL arrested for the SAME charge, is charged with the minimum and release on one's own recognizance, commonly referred to by its acronym "ROR".
They basically promise to be "good" and show up for the court appearance.
No bail moneys are required!
Ironically they rarely show up, imagine that...

It seems that we are starting our own "cast" system.
Part of our strength through diversity program?

Nobody gets deported under mayor dumbdumbs era! This city has turned to shit with too many third worlder trash living here!

Trump has the right idea about getting these people out of here who come and trash our country. The fact that there is such a outcry about illegal immigration, and the people conveniently forget the word illegal in front of that, shows just how bad the problem is. Every second of every day that they are here they're breaking the law. There should be no sanctuary cities. Breaking the law is breaking the law. Come here if you must, LEGALLY, but be prepared to obey the law and do as we do here. Don't bombard us with your customs such as loud tassa drums for a five day long wedding, and giant speakers to blare Latin music all damn weekend long in your house's 12x12 backyard( complete with a PA system that you don't need if your yard is that damn small. Just speak to each other normally.) that you bought with tax-free cash because you work off the books and don't pay taxes like everybody else here legally and countless other things that we are subjected to sense of home" invasion" began some years ago . This whole city is out of control with so many things going wrong and people in power not really giving a shit because it's not happening to them, or it's not affecting them negatively in any way to be important enough for them to do something about it. it's a no wonder everyone is leaving !

...to blare Latin music all damn weekend long in your house's 12x12 backyard( complete with a PA system that you don't need if your yard is that damn small

These people are also using microphones as if they are doing a variety show. It doesn't matter what occasion it is. It's very abnormal and mental behavior. One day passing by my "neighbors" committing these acts, I told them you know you're going to eventually run out of things to say and get bored of it. They yelled some shit at me but I blew them off. And I haven't heard a thing since (just the usage of the mic of course, the PA's are still blasting though)

But if the hipshits can have rooftop parties and yell in the streets when they get loaded at the end of the night, then it's only fair other nationalities can do it too.
It's vibrancy in action as our lousy corrupt mayor calls it.

Just a hint . There are people in all levels of law enforcement who give anonymous tips to ICE.....

We have to pay to imprison this guy for 20 years and only then will we kick him out??