"Urban Renewal" is a concern in Far Rockaway 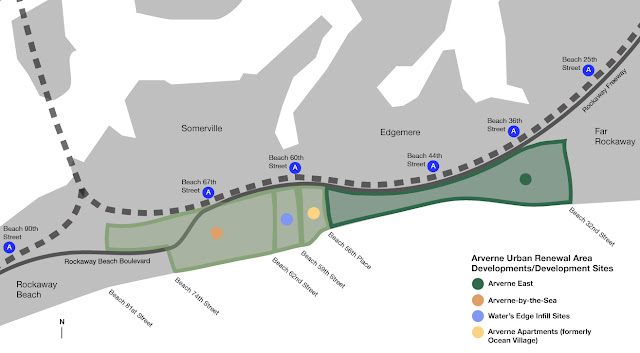 Some local merchants say they need more guidance on how to be part of a business boom the city seeks to spur in downtown Far Rockaway.

Under the city’s plan, larger residential buildings with retail spaces on the ground floors would rise where, today, a half-vacant shopping center and buildings with small businesses sit. To ensure that they can make it happen, the proposal includes a 13-acre urban renewal area, which allows the government to seize property and compensate occupants through a highly regulated process.

But if the City Council approves the plan, existing business owners said they are not sure where they will land amid the anticipated construction spree.
Lookran Jagdeo has run Far Rockaway Auto Glass Inc. in the targeted area for 21 years. Even if he is offered some sort of compensation to pack up, Jagdeo said he doubts he could find another nearby business location.

[Council Member Donovan] Richards said some merchants may have written off this plan because similar attempts have sputtered over the years.

He said the city is not eager to seize property classified for urban renewal, but said it may prove prudent, if the private market does not develop as planned.

Under the city’s plan, 16 businesses would likely be relocated from the urban renewal area, at least temporarily. Another dozen stores may be displaced if the real estate market proceeds as planned, city paperwork shows.

However, some shops in the urban renewal area have already struck deals to remain in the community long-term, Richards said. And the city’s Economic Development Corporation said it would help any merchant seeking advice.
Posted by Queens Crapper at 9:27 AM

Sounds like the City is hedging its bets in case the hipsters don't take the bait.

The local merchants and residents will be quickly annihilated by insane rents and chain stores if this proceeds. They should just restore what exists and leave it alone. Nice cheap rents green space and parking in that area. No need to city-fi it or make it hipster friendly.

"Sounds like the City is hedging its bets"
--------------------------
City's spoon feeding the sheeple shit & poison and calling it a gourmet meal.
More like sharpening the chisels & knives in a plan to eradicate everybody and everything in that area. Then hand it all over to special developer "friends" on a silver platter.

Hey ! The F_ with housing & Starbucks for hipsters, it should be in the interest of people been here and contributed for generations. Not some off the bus trust funder dipshits from west bumblef*ck !!
Be careful what you wish for because any "change" in this city is change for the worse if your not a multi millionaire.

"16 businesses would likely be relocated from the urban renewal area, at least temporarily"
-------------
Heard all this bullshit before, ask them Willets Point business owners how bad thing turned out, how they were lied to and how many are now out of business lost everything because the peanuts they were forced to take at gunpoint couldn't buy a outhouse to fit a toilet let alone fit tools & stock run any type of real business.

I miss having a good place to get my cars worked on, having beers with Rodrico "Mecánico el General" at Willets point. I hope Bloomberg and his cohorts all die painful and go to hell. deBlasio too !!

"To ensure that they can make it happen, the proposal includes a 13-acre urban renewal area, which allows the government to seize property and compensate occupants through a highly regulated process."
= Eminent Domain
which = you won't get sh#t for your property
= "the city" as usual is pillaging the community and reaping BIG bucks with the turn over value.

Not that Far Rockaway and the Rockaway's in general didn't need an aesthetic and economic boost but as usual it is at the financial expense of the residents and taxpayers.

Leave it to the Gentrification Industrial Complex to not fully inform businesses that already exist there. They see them and also all the indigent, poor and barely middle class earners of Far Rock in the way of their deranged city planning.

That town has suffered commercially for decades because of stingy cheap landlord who just died recently and all the first thing they do is offer or more aptly blackmail the citizenry into accepting faux luxury development and upscale dining bullshit.

It's not only the city hedging it's bets but maybe there are some that do not see a market for these things, for the majority of people there don't buy or can't afford what these lousy enteprenuers are selling.

The Brooklyn Brand may finally be dying off.

These shop keepers and small businesses must make the sacrifice for "PROGRESS"!!!

Far Rockaway... the ghetto by the sea. Where you can get plenty of crack, hos, guns, nutcracker - alcohol in tiny fruit punch bottles.
Yes. look at what all that government money has done for Jamaica. The Social Security building was supposed to do wonders for that area. Tell me what all that tax payer money has accomplished.

Please come to Beach 116th and see the beggars from the assisted living places, the drunks, the addicts and the lost.

The hipsters are not that stupid and unlike the ghetto locals, they tip at the cafes and restaurants. AND they don't come back to threaten anyone with violence if they forgot to put pancake syrup in their delivery. Happens all the time at the food places on Beach 116th Street.