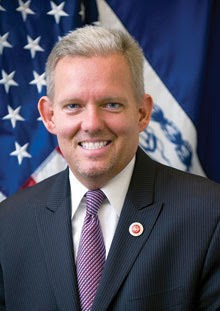 New York City Councilmember Jimmy Van Bramer (D-Sunnyside) continues to make fundraising appeals for his 2017 campaign committee to reëlect, even after he has reportedly dropped out of the matching funds program of the New York City Campaign Finance Board.

In an e-mail distributed on Thursday, Councilmember Van Bramer's campaign committee sought campaign contributions, in part, because, "I need your help in order to face the very real and immensely important fights that are ahead. I've spent this year organizing the resistance against the devisive retoric from the White House."

The e-mail apparently referred to a protest march that Councilmember Van Bramer spearheaded last November to denounce the politics of then-President elect Donald Trump as an affront to "Queens values," a vague political construct that appeared to overlook the prominent conservative sensibility that exists amongst voters in the borough of Queens.

Councilmember Van Bramer's campaign fundraising drive continues in the face of a news report that his campaign committee has reportedly exceeded a fundraising cap and has dropped out of the Municipal matching funds program, according to an article published by The Gotham Gazette. Councilmemmber Van Bramer is a member of the City Council's Progressive Caucus.

For this report, Councilmember Van Bramer's office did not answer a request to explain why the incumbent candidate dropped out of matching funds program.
Posted by Queens Crapper at 5:51 AM

Some may call it a "slush fund".

Perhaps the progressives are starting to realize that "We the People" are not for their progress nor the "resistance".

May the winds of fate, blow them away...

Van Bramer is an idiot. Jimbrowski is so busy with his fauxgressive activism that he lost track of the money he allocated. What's funny is that the predator developers he sold out to that have subsumed Queens Plaza with tower pestilence see no use to support him anymore, especially when they have De Faustio to do their bidding in perpetuity.

What's funny is that the predator developers he sold out to that have subsumed Queens Plaza with tower pestilence see no use to support him anymore, especially when they have De Faustio to do their bidding in perpetuity.

Got that right - when you talk to a councilman they complain how the Mayor is controlling development - city council cannot do anything about it.

What a subhuman, weasel f**kwad! JVB couldn't care less about anything worth saving, much less preserving and conserving in Queens County (except his own vile and derelict job), and his arrogance and depraved indifference goes back to the earliest time of public service betrayals.

In fact, despite that he receives a stipend for chairing the arts committee, his office treated me like nuclear waste when I asked Van Bramer to speak out against the removal of 'Triumph Of Civic Virtue' (the ONLY piece of art of softness and beauty that used to be prominently displayed in Kew Gardens Plaza - before it was evicted without public consent, under the cover of darkness, no less), and the unprecedented arrogance and indifference that I received from his office (and the rude and equally arrogant office staff), is the reason why this monumental statue is now languishing in virtual obscurity, and banished to a Brooklyn graveyard (and looking ridiculous without its fountain base).

And, if there is any pretense of Civic Virtue left in this already tonsured-and-ravaged 'Borough of Cemeteries,' then the statue's allegorical message of civic virtue triumphing over corruption and vice will finally have the last word and action for a worthless politician-predator (not public servant!), like him.

He doesn't want to open his books. Keep his donors hidden.

It is called filing a petition challenge with the BoE and any citizen can do it, effectively derailing a candidate if you can show insufficient valid signatures. It takes a commitment of time and effort, something few Queens cap readers will do because complaining feels so much better.

Alas 'Queens cap reader anonymous', in your smug, rather legalize reply, you provided NO definitive answer to the question as to whether there IS a check mechanism in place to prove the signees of this petition are entitled / eligible to LEGALLY sign the petition. Your 'flower words' and accusations of 'complaining' did not include a 'yes' or 'no', should you indeed know the answer.

You only prove my point. First result in Google for "Petition Challenge New York":

Objections
Every petition is presumed to be valid when filed, if, on its face, it appears to be in proper form and to contain enough signatures. However, a registered voter may challenge the validity of a petition. Written objections must be filed within 3 days after the petition is filed (1 day in a village election). Specifications of objections must be filed within 6 days of filing the general objections (2 days in a village election). For petitions filed with the State Board of Elections, objectors must deliver a copy of the specifications of objections to the candidate and file proof of such delivery with the State Board. For further details see Election Law §6-154 and §15-108 and Part 6204 of the rules and regulations (pdf 3,303KB) of the State Board of Elections.

See page 197 as numbered in the document.

Once again, you demonstrate that QueensCrap readers are typically lazy. Stop making excuses and stop shooting the messenger. You want to see change? DO THE WORK!

Yours truly,
Someone who actually managed petitions for a campaign of an independent, never before held office candidate - voluntarily.

Queens Crap readers are typically lazy, yet you place yourself in their company. You tweeders crack me up.

I choose my words carefully and exempt myself (and you too, Crappy). Not my fault your readers can't be bothered to even do a simple Google search. You do your part with the blog. Keep up the good work.

To 'Perry Mason' anon, I do appreciate the detail of your reply, you obviously are well versed on this subject. And right you are, as a 62 year old LEGAL citizen of New York and this Country, perhaps I AM too lazy at this point at my life for this kind of detailed research required. Unfortunately, based on what I and many other readers of this blog (lazy folks as we are) have seen an increasing change in population (no racist accusations please) in many sections of Mr. Van Bramer's district and that a certain level of skepticism is healthy. The question of whether an arbitrary individual, citizen status unknown, would be entitled to sign such a quasi-governmental petition will apparently remain an open item.

This, is the first in a series of walks that brings attention to specific luxury development projects and political interests by following the money. We "The Gentrification Tour Money & Politics" also wish to connect participants to relevant ongoing work against gentrification.