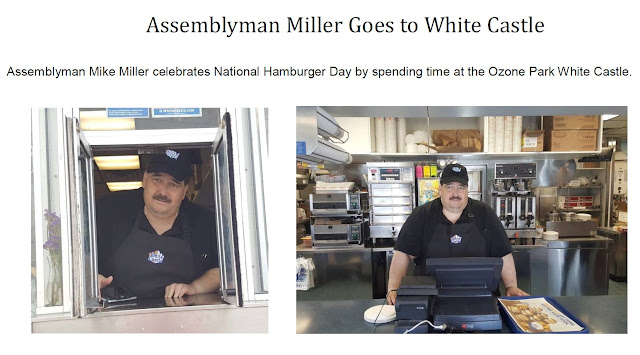 isn't that why all the fast food chains are switching to kiosks?

Now he is subject to easy ridicule, assemblyman belly bomber

There are quite a few elected officials (City Hall, City Council, Assembly, State Senate) who should be voted out of office, and then they can start asking the question, "D'ya want fries with that?" in their new jobs...

Who weighs more? Miller or Comroy? Maybe a sumo wrestling bout in the offing?

Mike has to stock up when he is in town, no White Castle in Albany. Can't say as I blame him, the frozen ones aren't the same.

What a sad sack of terminal shit this pathetic garbage collector is (and, always HAS been)! What a brazen display of shamelessness, dishonor, disloyalty and dereliction of public duty!

But, despite Miller's cradle-to-grave rewards for epic fail, what he is REALLY collecting is MY and YOUR taxpayer dollars for stuffing his fat, ugly face with empty calories, to match his empty positon of monstrously failed public service, exactly like every other crooked-and-corrupt pol in southeastern Queens, where taxation without representation is the eternal slogan of the millennium that shamefully hangs over Queens County, like endless smog over which We, The People all choking, in perpetuity!

When is National Tub of Lard Day?

And, there it is, Queens peasants——truth in advertising, where this solidified tub of pig lard is paid $85,000 a year, when he isn't even worth $0.85 cents (not even the cost of a single White Castle burger).

Worse, Miller's entirely 'KLEPTOCRATIC' operations is a testament to how corrupt, broken, dishonest, dishonorable, disloyal, dysfunctional and derelict Albany and New York State government are (and always HAVE been), COMPLIMENTS of the dynastic team of criminal sociopaths more commonly known as Mario & Son (where no public crime is too small to exploit for personal gain, graft, greed and self-enrichment)!

Well done, Miller! You've slacked off for nearly eight years of phantom service and private splendor for yourself——versus, eight long and staggering years of taxation without representation for constituents like me, whom you've done your successful best to ignore with impunity! And, the public be damned (again and STILL)!

Doesn't Wimpy usually wear a derby and red necktie? "I will gladly pay you Tuesday for a hamburger today".

I imagine that the Assemblyman understands, and perhaps appreciates the fine art of self deprecating humor.

However; in this current political climate and era of social media, all I ask is WHY???

Poor Mike, so clueless he didn't even see this coming. He should fire the person who advised him this would be a fun afternoon with a few free belly bombers. Must be getting his political advice from recent community college grads

Was he doing a screen test for the next Harold and Kumar movie?

Aw, come on people, leave the guy alone. Stop trying to belittle him. He's a human being like all of us and doesn't deserve to be denigrated. How many of you would give up a day serving burgers in a hot place like White Castle? I don't know about his politics and in this situation I don't know how it matters. Mike does what he can to help those who ask him. I know tenants who would not have had their apartments repaired were it not for his help.
Good job Mike. I'm on your side. Enjoy those burgers.

Now, this photo alone is a visual contempt for every single constituent like me who this useless circus elephant has ignored with impunity for the past eight years. Now, stop me if you've heard this before, but when is this 300% fake government fraud ever intending on 'spending time' honoring his oath of public office by getting to work for the more than $80 grand a year that We, The People's tax dollars pay him for what amounts to lunch and a manicure, which for Burgermeister Miller is a stressful day? Or, maybe Albany should rescind his government checks and just pay him off with daily sacks of peanuts, like any other elephant?

During the eight years that Miller has ignored my family's documented evidence of state government corruption, sloppy cover-ups and outright fraud, he actually made a bad situation worse by looking the other way, as his trained staff of circus monkeys continue to brazenly devalue honesty itself by hanging up the phone on constituents like me, instead of working for a living to make life bearable by obeying the rules and enforcing honest, ethical leadership (that leads by example), in order to provide actual help to a constituent like me, whose urgent request for help (ANY help), have been willfully ignored, which creates lawlessness and vigilantism as a 'Cause & Effect' of a completel dereliction of public duty by publicly elected failures like Miller.

This is how organized crime family rings operate, Queens Crappers, which New York State government is, and always HAS been (especially because of a dynastic, gangster thug occupying the governor's seat up in the state Capitol, 'Gargoyle Andy,' and his Albany henchmen of epic, humanitarian fail. Here is hoping that the next public photo of this useless waste of morbidly obsese skin (who is depleting the Earth of precious oxygen), will be a mug shot——exactly like his equally corrupt predecessor, Anthony Seminerio, whose own disgraced-and-failed life of public service ended in death behind bars.

Wow, this fatso needs to go to a juice bar, probably get a salad or an Acai bowl not go to a White Castle, selling empty calories to people. He also needs to get off his big giant ass and go for a nice long walk, at least an hour. Big reason why health care costs are sky rocketing are lard asses like this guy who keep eating crap and not exercising.
America was not a nation of fat lard asses 20-30 years ago, in fact only about 9-10 percent of New Yorkers were obese in 1990, now that is 30 percent today, when stores like Whole Foods and Fairway are selling Organic this and Organic that. Go figure.

I'll leave that bloviated, taxpayer sucking derelict alone, Anonymous, when Michael Miller starts finally ACTING like a human being, and honoring the oath of office that he took eight years ago, instead of behaving like a corrupt, dishonest, 'See No Evil, Hear No Evil and Speak No Evil' unresponsive tyrant (and failed public servant), and one who was appointed (TWICE!), to serve at the very bottom of an even greater failed government asylum: Albany's and 'Gargoyle Andy's' private lair of lawless bullies and henchmen, open criminals and street thugs, all of whom have infected the state Capitol with a level of arrogance, evil and depravity that now make Boss Tweed of Tammany Hall look like a harmless and lovable public servant of We, The People!

But, if you don't know about Mike's rogue politics, much less how it matters, according to you, then you're wasting precious space here on this thread by weighing in on a matter that you clearly know nothing about, and worse, that you've defended Miller as someone who does the best that he can when you aren't even qualified to evalute him.

I DISAGREE, and here is why: In nearly eight years of taxpayer wasted money and time, Miller hasn't been responsible for a single piece of legislation that has been passed for his ever languishing constituents——choosing instead to willfully ignore his paid, assembly duties and constituency with equal arrogance and impunity, and creating a low level 'ombudsman' position for himself to address minor disputes like broken traffic lights, noise complaints and the like, that no one asked him to adjudicate (because, there are a number of people already in a position to help with low level, nonemergency complaints, like Community Board 9 & 10), instead of addressing the REAL work that has never been accomplished throughout his two terms of sitting on his Woodhaven throne, and collecting his pay (the public money)!

So, maybe you are okay with that unacceptable bullshit and profligate, wanton waste, pal, but I am clearly not (and likewise, too many other complaining, but silenced voices of Miller's district constituency).

After all, before this giant sloth was plucked from virtual obscurity eight years ago in order to fill the empty assembly seat, our profoundly disgusted residents were stuck with ANOTHER useless betrayer of public trust——Tony Seminerio——and, THAT voracious thief of the hyper-corrupt, 'pay to play' variety, FINALLY ended up behind bars (after 30 staggering years of unlawful criminal kickbacks from Jamaica Hospital, not to mention a lifetime record of intensely failed-and-incompetent service), and that is where he died in poor health, forgotten and disgraced (his legacy).

If Miller revels in working the fast food racket so much, then he should relinquish his assembly seat and more than $80,000 salary and start earning minimum wage to see how it REALLY feels to struggle every day in virtual beggary, obscurity and quiet desperation!

Further, he is so much better qualified to flip burgers at White Castle for a living (and paid what he is REALLy worth that is commensurate with his experience), because during the entire eight years of my constant calls to his office for help (as a willfully ignored constituent), on a multitude of problems for which his office has complete authority and control to adjudicate, I have never gotten ANY help as my problems have now magnified and are way out of control. He is a filthy disgrace who deserves jail time like his equally crooked predecessor, Tony Seminerio (another criminal who finally got his just desserts behind bars, which is where he died in total disgrace)!

Isn't this the same guy that was out on the closed beach in Jersey on the 4th?