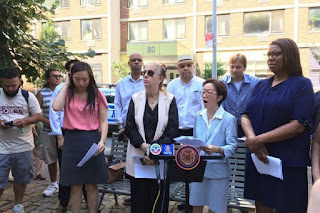 Elected officials said they will bring a lawsuit against the city if it doesn't halt a trio of skyscrapers slated to rise on the Two Bridges waterfront.

Manhattan Borough President Gale Brewer and Councilwoman Margaret Chin on Friday said they will urge the Department of City Planning to reject an application submitted by developers to build the residential towers within a three-block radius, urging the agency to instead put the developments through a more rigorous review process.

But if the city elects to approve the application, which is now making its way through a comparatively lax review, they will resort to legal action, said the politicians.

"To the members of the City Planning Commission, we have a simple message: if you rule against this community, we will use every tool at our disposal to make sure the voices of the people are heard," Chin said at a rally near the development sites.

JDS Development Group plans to build a 77-story tower at 247 Cherry St., while Two Bridges Associates plans two towers on a shared base at 260 South St. Starrett Development is planning a 62-story residence at 259 Clinton St.

Neighbors fear the collective developments will negatively impact their quality of life by blocking views and natural light, overcrowding an area with sparse transportation and open space options, and driving up property values by bringing hundreds of market-rate units to the largely low-income neighborhood.

Brewer and Chin last year urged DCP to put the towers through its rigorous, seven-month Uniform Land Use Review Procedure (ULURP), which would require a review from the local community board, borough board, city council and the mayor himself before going to a vote.

The agency shot down the request, stating the towers are considered "minor modifications" because they do not require new waivers or zoning actions.

Instead, the developments are subjected only to a city-mandated environmental review process aimed at identifying and mitigating potential impacts they may have on the surrounding area.

Could you imagine a Queens elected official even threatening something like this? Usually they just say, "Oh well, I tried" while they pocket scads of dough from the developer.
Posted by Queens Crapper at 12:11 AM

1. The people in Queens only have misleading info from the weeklies and their politicians which are basically ads for money laundering restaurants and development projects. Those of us watching the other boroughs notice that there is a widening gap between what is acceptable there and what bullsh*t we are being fed. Once again, a theme that is increasingly rearing its head here: QUEENS IS INCREASINGLY FALLING BEHIND THE REST OF THE CITY.

2. The beleaguered Queens civic community receives no help from outside the borough - the received opinion on this is on usually involves the words 'stupid' and 'backward' in more unguarded moments. We leave you, dear reader, to reflect on that. That is a big mistake - read on in the next point.

3. The other boroughs need to get their head of the sand and do something about the damage that Queens is doing to the rest of the city: their development is not brought by their politicians (who actually fund community real grass roots preservation programs - something unthinkable in Queens with its state supported QBPL or fake tweeder groups masquerading as community based organizations) - but THE VOTES THAT CARRY THE DAY FOR DEVELOPMENT IN THEIR COMMUNITIES ARE COMPRISED OF CITY COUNCIL MAJORITIES COMPRISED, TO A LARGE DEGREE, BY QUEENS POLITICIANS (secure that their cloistered constituents have no idea what is going on). Same can be send for the source of both the construction companies and their third world non-union labor - Queens.

If we want housing costs to go down we need more units to go up. With the increasing rates of population growth (demand) beating rates of new housing (supply), we get crappy 100 year old 2-families when we should be living in nice mid-rise communities. These towers are important to keep Queens growing and changing alongside the rest of New York City.

Sounds like an acolyte of that Manhattan group that thinks all of Queens should be 6-story buildings. Newsflash: we've been putting up towers for more than 10 years now and it's not helping a bit because foreign investors are snatching up all the units, plus no one is building new housing for the middle and lower classes anymore.

We need a ban on all new construction in this city. There are too many people already. We don't need any more.

"... plus no one is building new housing for the middle and lower classes anymore."

Here, here. Really, all you see are these asymmetrical design towers. What's wrong with regular rowhouses?

These towers are bullshit, these affordable units are practically impossible to qualify for. Either you make too much or too little. And these luxury towers are making the AMI's rise too, for there are now new buildings in the South Bronx, where the largest concentration of poverty is, go for close to 900 a month which the majority of people there, who make about 25,000 or less, cannot afford.

"If we want housing costs to go down we need more units to go up. With the increasing rates of population growth (demand) beating rates of new housing (supply), we get crappy 100 year old 2-families when we should be living in nice mid-rise communities. These towers are important to keep Queens growing and changing alongside the rest of New York City"

No wonder this person is "anonymous". The quote is from "Queens Criminal Overdevelopers Textbook" page 84. What a bunch of self-serving crap from the real estate industry.

Love him or hate him, you-know-who's father, Fred Trump, took care of the middle class housing needs in Queens and Brooklyn.

With the subways literally falling apart, I don't understand how people can keep advocating for greater density, particularly in areas that are already underserved by public transit. LIC has the E/M and 7 trains and they are bursting at the seams. There are barely any grocery stores, not enough schools and it is quite an expensive area. We haven't even started talking about actual water/sewer infrastructure (which is typically over 100 years old) in the area either. Yet, more and more towers keep going up. And LIC is a "good" area of Queens by all accounts.

So we want to increase density in southeast/northern/central Queens...and then what? Are we going to put better paying jobs in those areas as well? Or are we just going to encourage ever more people to cram on the crumbling subway to get to the jobs in Manhattan from longer distances? There should not be any new residential development without supporting infrastructure and neighborhood amenities. Unless of course, you enjoy living in an overcrowded slum, in which case...carry on.

Quoting Queens Crapper: ". . . we've been putting up towers for more than 10 years now and it's not helping a bit because foreign investors are snatching up all the units, plus no one is building new housing for the middle and lower classes anymore."

QUERY: Why are "foreign investors are snatching up all the units"?

RESPONSE: When a "foreign investor" buys property in the U.S. for $500,000 or more, they automatically get a GREEN CARD, eventually become a citizen giving them the right to bring the rest of their family to the U.S.

RESULT: ". . . no one is building new housing for the middle and lower classes anymore."

WHY: Middle and lower classes are barely squeaking by -- they don't bring cash to our politicians' election coffers BUT you can bet that foreign investors contribute to developers' coffers, AS WELL AS politician's accounts.

The damage to NYC by the Queens delegation is spot on - these are the people that are the core bock on City Council voting for over development for everyone in NYC.

The other funny thing about this group - they routinely vote for Landmark Designation for other communities while they tell their constituents that Landmarking is bad.

This is not accurate.

A foreign investor can invest in real estate project and not own a "unit". That doesn't mean they are buying a particular property. They can invest in a large development that then sells or rents the properties. The number is actually $1 million dollars but it is reduced to $500K if the development is rural or has high unemployment. This isn't such a bad idea. How else do you want to get the funding. The people that can't afford to but in NYC aren't going to invest.

The green card is not automatic either. Who comes up with the crap?


>>RESPONSE: When a "foreign investor" buys property in the U.S. for $500,000 or more, they
>> automatically get a GREEN CARD, eventually become a citizen giving them the right to bring >> the rest of their family to the U.S.

Because there is not an high enough return on investment.

What is middle class is the question.

Middle class in NYC is a 4 year college degree and $80K plus salary for a single person.
That's the low end for middle class.


No college = lower class. Honestly, there are places in New Rochelle, Yonkers and Mount Vernon to rent....and Bronx. Bronx is on the cusp of having a real estate boom. So if you can't afford Queens buy something in the Bronx before 10 years goes by and you're still complaining.

>>no one is building new housing for the middle and lower classes anymore.

And why not, Ms. Chin?
More Chinese can then live in Chinatown proper instead of filling up Flushing even more.

Build them in Flushing where Chich Apelian and his crooked cohorts will rubber stamp the project with ease.
WTF does it matter if Flushing gets another pair of towers?

Folks born here who didn't go to college chose to be outcast and deplorable. They had all the chances in the world and rejected them ,so we can reject them, too.

Hey, cool, we got a Boston bus from Flushing. But why not DC? http://www.coachrun.com/bus-stations/