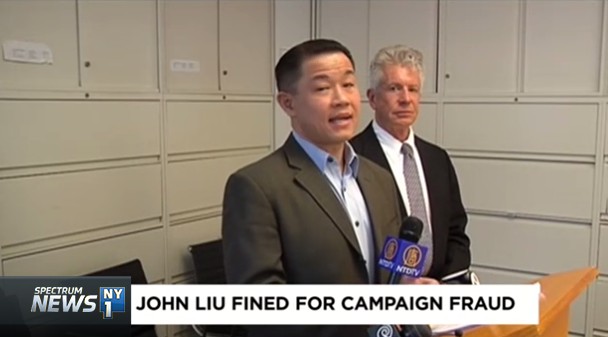 A former city comptroller was hit Thursday with a hefty fine in connection with his 2013 run for mayor.

The campaign board slapped John Liu with $26,000 in campaign finance fines in connection with a straw donor scandal.

This comes after Liu's campaign treasurer and a campaign fundraiser were convicted of federal fraud charges.

They were accused of concocting a phony donor scheme to get Liu public matching funds.

Liu never received the funds, but the board determined that his campaign should be penalized for fraud.
Posted by Queens Crapper at 9:21 AM

Liu is a turd

Out to get this guy because he would give the Dope from Park Slope a run for his money!

I wish he would run. I would vote for him just to get the other clown out.

Why just a fine? Why no fraud charges?

CFB is a sad, sad joke. No charges were made because they probably can't actually prove fraud.

But Cuomo gave him a cushy job in Albany.

"The penalties and interest imposed by the Environmental Control Board came to $528,300 — stemming from 7,032 violations at about $75 a pop. But the city collected only what was left in Liu’s campaign account, a measly $2,731.49, according to city officials.

“Because the penalties were imposed against the campaign and not John Liu personally, there is no claim against John Liu,” said Law Department spokesman Nick Paolucci.."

John Liu was targeted because he exposed fraud that led up to some extremely powerful and rich unnamed people. Just take a look at his record as NYC Comptroller and you will see why the "fix" was in against this man. John Liu has integrity.

Read Jesse Eisinger's new book entitled, 'The Chickenshit Club: Why the Justice Department Fails to Prosecute Executive,' and you will understand why there are now two separate Justice Department's within the 'UNITED STATES of AMNESIA and ENTERTAINMENT': One for the rich and guilty——another for the poor and innocent!

The book is also a testament to how it's no longer a crime to be 'Too Big To Fail,' and the rampant human misery that all crooked politicians (not public servants) and CEOs continue to impose great consequences on the rank and file to be terminally burdened with, whilst clearing the way for even more corruption, graft and greed to be FOISTED on to We, the People, with a vengeful impunity that is unprecedented, to date——and, the public be eternally duped, bilked, scammed, SCARRED and damned!