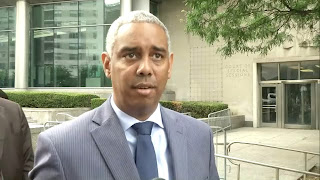 A jury Thursday has found Queens City Councilman Ruben Wills guilty on five of six counts against him in his corruption trial.

Wills was accused of stealing more than $30,000 in taxpayer money, funneling it through his nonprofit group, then using it, among other things, on clothes, fast food, gas and, in one case, a $690 Louis Vuitton handbag.

After the verdict, he was upbeat and defiant. "I'm just going to sit here and make sure that my community knows that I'm innocent," Wills said to reporters. "I didn't steal any money. I'm disappointed in the verdict."

Wills faces up to seven years in prison. His attorney plans to appeal.

Let's recall that the Queens Machine endorsed him while he was under indictment.

Now what happens? Do they pick his successor?
Posted by Queens Crapper at 5:49 AM

As Kool and The Gang sang:

YES VIRGINIA, THERE REALLY IS A SANTA CLAUS.

FUCK YEAH. Cry baby asshole Ruby Wills is going to fucking jail and it could not have happened to a bigger asshole. Wills who can get up to 7 years in prison is automatically expelled from City Council. Hell, when another asshole elected official City Speaker Melissa Mark-Viverito says:

“Ruben Wills betrayed the trust of all New Yorkers when he abused his position in the State Senate to steal thousands of dollars from the hardworking taxpayers of New York for his own selfish gain.”

YOU KNOW IT IS FUCKING BAD. Because this questionable figure and all of city council got that nice big old raise last year. Talk about THIEVES.

So long asshole Wills, you probably made my blog more than any other asshole Jamaica elected official. THANKS for the ghetto memories!

So know that brings the count up to FIVE of the number of asshole crooked Jamaica Queens elected officials sent off to jail in the last few years.

AND speaking of the other assholes, are we now going to hear from the local elected officials like Comrie and Meeks on this douchebag’s sentence. AND how about the asshole Queens Democratic Party which was backing him even when he was on trial.

SO LET’S HEAR IT AGAIN ONE MORE TIME:

Yes, it is the small things in life that sometimes make folks happy.

Funny how if this thug would have just controlled his criminal habits and waited a few years, he would have got his 33 grand from the unjustified raise the council gave themselves last year.

This brief flash in the pan, a glimmering of hope, an indication that perhaps we are starting to turn towards the proper direction, is just that, a moment and a feeling, nothing more.

There are more than fifty other thieves that are stealing from us on a continuous basis.

When will the obstructionists in the United States Senate allow the president to fill the vacant position left by Preet's removal?

And before all that say he fought such corruption, he was but a showman, endless investigations with no conclusions nor convictions!

Yes, this is a start, however the swamp is quite deep!

Realize that when you are up to your ass in alligators it is always difficult to remember your purpose is draining the SWAMP!!!

Virginny Joe Crowley has been the top dog (yup, DOG) of the Queens County Democratic Party since Tom Manton bequeathed this position to him in 2006.
And since then has anyone noticed all of the democratic politicians who have been indicted or spent time in prison under Virginny Joe's watch?
Scarborough, Smith, McLaughlin, Hevesi, Monserrate, Seminerio, etc.
And Virginny keep his Queens position, his Queens seat in Congress and his supposed Queens family in VIRGINIA!

What fools these Queensites be!

It's only fair that he should pick his own successor-maybe a family member....and then he can get the seat back after release from prison.
Queens seems to attract felon/politicians

Now, wasn't it Pedro Espada himself who finally landed in jail because, among many other crimes of public embezzlement, didn't he keep a dummy apartment in the Bronx, whilst actually living full time in Mamaroneck, Westchester County?

So, why isn't a vulgarian crumb bag like Crowley not locked up yet—LEAST of all because of his unlawful Virginia residency that so completely betrays all pretense of public trust, ethics, integrity, accountability and transparency?

And, if there wasn't already enough over which to blow everyone's stack to be 'White Hot' with anger, now THIS entrenched corruption that should trigger World War III, because these are massive crimes of hyper-corruption against humanity, like nothing else:

Commentary: The real reason why New York US Attorney Preet Bharara was asked to resign: Breaking News 4, By Richard Lawless

Before the inauguration, Donald Trump and Preet Bharara met and an agreement was struck that would keep US Attorney Bharara in his current position in New York under a new Trump administration (richard_lawless2.jpg)).

Richard Lawless is a former senior banker who has specialized in evaluating and granting debt for over 25 years. He has a Master’s Degree in Finance from the University of San Diego and Bachelor’s Degree from Pepperdine University. He sits on several Corporate Boards and actively writes for several finance publications.

New York Senator Charles Schumer was instrumental in getting Bharara appointed to that position and in return was asked from time to time to do favors for the senator and his allies. Up until recently, President Trump had no idea what was really going on. Once President Trump’s staff understood the quid pro quo, they had no choice but to ask for Bharara’s resignation.

In 2015, Puerto Rico defaulted on $70 billion in municipal bonds. Those involved panicked. There was ample evidence that the issuing agencies were technically bankrupt when they issued the bonds and that they purchased fraudulent credit ratings from Moody’s Fitch and S&P. Wall Street’s biggest banks then knowingly sold junk bonds to innocent investors, labeling them as safe investments. Everyone made a ton of money, except the innocent investors.

The evidence of this massive criminal act was overwhelming. The lawsuits and complaints to the FBI and SEC were streaming in. Dozens of Wall Street executives could go to prison. This was serious.
The Wall Street executives went to Senator Schumer and asked for two things: that no criminal investigations or prosecutions be considered and that he somehow limit the bondholders’ rights to keep them from suing.

By this time, all congressmen and senators were made fully aware of the potential fraud that had taken place in Puerto Rico. That didn’t stop Senator Schumer; he put together a small team consisting of himself, Elizabeth Warren, Senator Blumenthal and Senator Feinstein. In January 2016, they submitted a rider to the energy bill that unbelievably would prevent the innocent bondholders from suing. All four politicians were quickly rewarded and the Wall Street contributions flooded in.

Then an understanding was stuck with US Attorney Bharara that investigations would be sidetracked and no prosecutions would take place. As pressure was building with the public discovery of hundreds of new felonies related to the issuance of this $70 billion in bonds, the DOJ continued to ignore the evidence and sidetrack all efforts by their field personnel to prosecute. Bharara was paying back his mentor in spades.

The four senators continued to press for a prohibition of law suits, confiscation of what was left of the $70 billion in bond proceeds and a revocation of all the bond holders’ legal rights. They got what they were hoping for in the PROMESA legislation. The politicians then went on to shape an argument that whatever money was left that was not already stolen should be given to underfunded union pensions.
The level of corruption between the bond issuers, the rating agencies, the major Wall Street banks, the DOJ and our politicians would make the mafia blush.

Bharara was given a huge amount of information, including sworn testimony of the fraud and over 10,000 pages of documentary evidence. A second year law student could have convicted all parties under our current RICO statutes yet Bharara did nothing.

I tried your bold instructions, Anonymous, and it didn't work. Now, are you saying that I type text, and the word or string of words will appear in boldface? Kindly elaborate just a little further.

a lousy $690 for a Louis Vuitton bag -did he get it on Canal Street?

was it a change purse? sad, that he doesn't even know how to shop properly.

It didn't work for me. Hmmm.