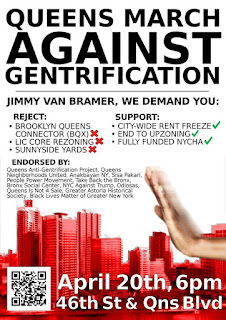 Queens residents will take to the streets Thursday to protest several of Mayor Bill de Blasio's proposals that they fear will speed up gentrification and displacement in the borough, organizers said.

The "Queens March Against Gentrification" will start at 6 p.m. at the 46th Street 7 train station, where attendees will denounce the mayor's proposed BQX Streetcar, his plan to develop Sunnyside Yards as well as rezone a large portion of Long Island City.

The marchers — organized by the Queens Anti-Gentrification Project and other advocacy groups — argue that these three projects will spur additional development in Western Queens, raising rents and displacing residents.

"Any of these proposals alone would result in displacement and gentrification in Queens," the event's organizers said in a press release. "Together, they represent nothing less than an all-out assault on our neighborhood."

The protest echoes concerns previously expressed by some city residents about each of the targeted projects.
Posted by Queens Crapper at 7:05 AM

Hipsters, socialists, and communists upset that the "gentrification" they created is undergoing the continuation of change that is this City.

Their only concerns are their own rent costs and the regressive communist redistribution policies in which they were indoctrinated in via public schools and the so called institutions of higher learning.

It will be a washout, but many could use a shower...

You had me until I saw the 'Black Lives Matter of Greater New York" was an endorser. Democrat party activist thugs.

Why would developing this dump into something usable be on their list of projects that will create gentrification?

Queens is crap. Enough said this place is not worth fighting for, it's a sanctuary city for illegals and hipsters.
Wonder why normal folks often leave this place? Queens is a giant garbage can priced like a diamond from Tiffany's.

As the old saw states, don't comment on how a dog looks walking in its hind legs, just marvel that it happens at all.

I guess everyone is stoned today.
Enjoy your useless protest, it's never gonna stop.

They gonna get called a mob of racists no matter what.
The Mayors office controls all the media

no pictures how come?

I've never been less proud to be part of this comments group. I know most of the organizers and they are mostly from Queens. Are you all 80? Jeeez, activism is a good thing if it will create dialogue and force change for the better. But I guess it's nice to swallow bitter pills from the comfort of your anonymity.

Attending will be aggressive immigrants who have commandeered all Queens non profits, some blacks who are shoving up because BLM is handing out metro cards, lunch and snacks and some other poverty pimp non profits where usually the brains/directors are DWL's. No Queens white residents need apply. The BLM people will leave as soon as the metro cards and snacks are handed out. Yawn, nothing new going on here but more poverty pimping.

I'm sickened to see that BLM is now a non profit organization.

>They gonna get called a mob of racists no matter what.
>Another anti-White protest

Hysterically, both of those statements will turnout to be true. The Mayors office will call them racists even if it was only BLM doing the protest. They'll probably even shoop in another fake "white lives matter" chant.


>You had me until I saw the 'Black Lives Matter of Greater New York" was an endorser.

Even a stopped clock is right twice a day.

This is a protest against Jimbrowski

There's a video where they crashed a CB meeting (without the community of course) featuring predators from REBNY with JVB and the queens steamer Katz herself in attendance.

The gentrification industrial complex is only concerned with re-engineering districts for the frivolous spending, unquestioning authority, dubiously creative class hipshits and doesn't give a damn what happens to all those displaced. From the middle class to the working poor, black, hispanic, white, asian, or arab and indian, muslim or christian, from BLM to the alt-right.

Neoliberalism truly follows no ideology but money, money that is mostly speculative and imaginative.

There's a simmering riot going on. I don't think you'll find better symmetry against this devious city planning than the people in Crown Heights this year and Maspeth from last year.

Jimmy wants to meet with you guys so he can figure out who to co op. He and has staff worked the crowd at the Elks Event a year ago and they were a marvel to be seen.

DO NOT LET THAT HAPPEN TO YOU!

To Betty Ruiz: "The comfort of your anonomity?" Dear lady, you don't know from what you speak! For years, I posted my real name online, only to be personally attacked and excoriated, ironically from the very ignorant, uneducated masses, all of whom continue to vote against their OWN self-interests (to present day effect), as they falsely continue to elevate the filthy, two-party-machine-failed system that betrays all pretense of public trust, ethics and integrity!

In fact, the system of political corruption is SO entrenched, that it actually upsets the many Queens wages slaves (and yes, peasants, because they refuse to assimilate, and they dress, act and think like they are still living in their thatched hut, peasant villages, which is just fine for the 300% fake publicly electeds, as ignorance is bliss), into protecting the failed leadership to whom they are bizarrely beholden, but can't explain why.

So, keep your name public for now, Betty Ruiz——but just wait! Soon enough, the monstrously failed political henchmen, and all 'OTHER'deeply disturbed forces will come a knockin,' and when they do, then you too will become Betty the Anonymous!

Meanwhile, nothing ever changes on this vapid blog anyway, except for angry mobs to sound off, whilst politicans laugh all the way to their cradle-to-grave, defined pension, city jobs——ironically, jobs, pensions and benefits that should have been designated for people like you, as well as the REST of the rank and file! And, the public be damned (again and STILL)!