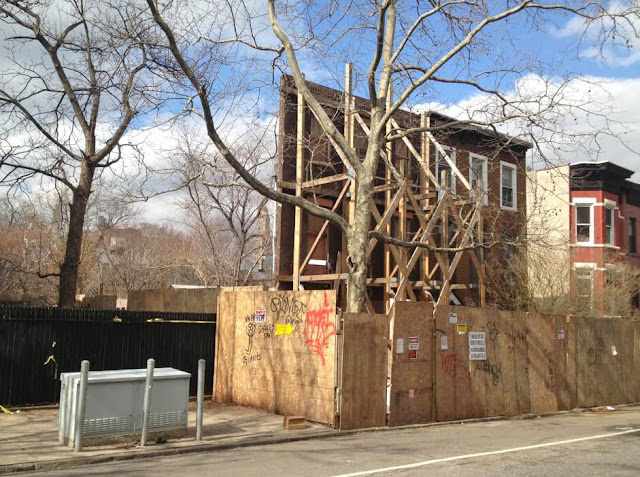 Brownstoner has some pretty amazing photos of 2 houses in the Prospect Heights historic district which were almost completely lost, but were eventually resurrected and sold for millions: 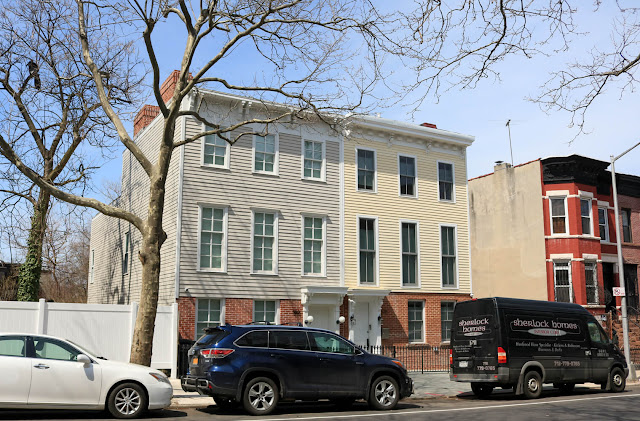 But preservation is a waste of money...
Posted by Queens Crapper at 12:19 AM

i can only assume this is with re to the dulcken house.

those had surviving facades. dulcken does not. those had built-out square footage (nearly 4k). dulcken does not (1600 sf). those are in a quiet, desirable location. dulcken is under an elevated train. those were already landmarked. dulcken is already ruined. dulcken needs $400k in reno just to make it consistent with well-maintained houses in the area but its size means it wouldn't sell for more than $1.6m anyways. If it needed to be restored to look like the historic pics, try $800k in reno. maybe it gets $1.7m at that point. it is never selling for $2m+.

but tell the guy who just spent $1.4m on development rights to spend $800k to make his house worth another $300k. astoria isn't prospect heights or fort greene, there is no turning back the clock on these. if they're not preserved, they're not getting landmarked. it's just not going to happen, because there are zero financial returns to be had like park slope or brooklyn heights or the upper east side. no one is going to fund restoration on it at a loss. they would sooner let them turn into zombie properties and wait for them to collapse.

seems wiser to focus on LPC approval for old astoria village, or lebanon terrace, or some of the prewar flats like the mid-40's near 31st ave. all these areas have ample properties that have literally none of these problems... plus worse zoning, and established owners who haven't bought in to redevelop. the financial value proposition makes more sense. reacting after the announcement of a demo hasnt - and isnt - working, and if the last few years have told us anything, its not going to.
-somethingstructural

Is it "preservation" when they look so ugly? They even covered up the lovely bricks with disgusting aluminum siding.

The Brooklyn properties were r-e-s-u-r-r-e-c-t-e-d. They were reconstructed. That happens at times where there is a will. Check out the massive REBUILDING of the Church of Our Lady in Dresden, Germany after it's LEVELLING in WWII:

-something structural: why the defeatism?

It's because Brooklyn is not a borough anymore to call home, it's a high end brand. And Queens is not.

I maybe just a poor working stiff with no real estate bonafides, but how are those apartment buildings worth 3 million dollars? Not even a palatial art deco mansion in the Hamptons with a beach path is worth that much

Maybe our borough will get a bit of token hip cache with the recent deaths of Jimmy Breslin and Don Rickles. (RIP both)

Something structural is plugged into real estate George.

Astoria is a particularly sad case - a working class tight knit community that is betrayed by its own that got into a leadership positions and then betrayed that trust by selling it out - not unlike the Russians after Communism. Take a look at Vallonia, and the attitude mentioned elsewhere here on Paul's comments. They got away with that in Astoria. It ain't gonna work elsewhere .. and even in Vallonia the handwritng is on the wall.

Working people are trusting of those in power, be it a priest or politician, and that often sets the tone for a community politics. It made sense when the priest was there to comfort a people who were economically or politically abused - they helped LIC get its charter as a city and gave it independence to chart its course. The local politicians go patronage jobs, or legislation passed to help the little guy.

That is breaking down. Today religion is less important. Today the politician does not care about getting a chicken for your pot but a summer home he's got.

Also, in a place like Astoria, the demographics are changing. Sure, education and the government, after the 70s unrest, tried to make the snowflakes little apolitical consumers. That is drawing to a close. You can live in your parent's basement only so long drinking craft beer earned on from your no frills internship before you explode.

Astoria should be an interesting test case over the next few years. The lock that the local insiders have on data and news is increasingly getting open and being discussed. Questions that were unthinkable are not being raised and discussed. At some point, the lock the leadership will be called into question.

There is no problem with this. It shows the system does work and is self correcting.

That the Dulcken house is toast is known before the campaign is stared to save it. But the real purpose might be more insidious. Historians write the final account. And generations in the future, that would have valued that place, will spit at the name of those who were responsible for its destruction, students of civics will use it a case study, and the building could easily be rebuilt if some of the plans that floating under the surface of that community soon explode to the surface - and will sweep them away, as so much dirty foam spiraling down the drain.

And our Crappie will be lauded as the tip of the spearhead of change.

george -
shoot me an email - somethingstructural@gmail.com

no matter what these smear campaigns against me say i'm actually a nice guy.
-somethingstructural

Either Structural doesn't know what they are talking about, or more likely from the knowledge displayed, is very selective in thinking. My guess they have a financial interest in tearing down this building. Mr Caliedno perhaps?

I read the with interest the history of the house (don't know how someone could say they did not know its past unless they have their head stuck in the ground - its on line).

Saving this house is easy. Look at the world of music. Start with Steinway. Look at the international connections. Make some calls. Send some emails. Most importantly, GIVE IT THE LOCAL POLITICAL SUPPORT to give space and credibility.

This place could give the current owner a good return if he flips it, someone like Caliendo a chance to earn an award to restore it, the tangible and intangible benefits to make it a museum/performance space that far exceeds financial returns than any tenement.

In other words, let the movers and shakers of Astoria give some people with the creativity and imagination a chance. The demographics in Astoria has changed and it can be done. Let the community breath dammit!

How about that idea?

you need to immediately stop slandering me and my reputation. I have elaborated on my profession and I have consulted to GAHS on a volunteer basis. you know I have no financial interest in this and you know I am not a developer. I don't care if this is bob or not, spreading malicious things you know to be lies is slander. if you are unconvinced then sign your posts and have some conviction. stop being a coward. you aren't fooling anyone just making a fool of yourself.
-somethingstructural

His name is Mudd said...

"-something structural" is your baptismal name?

I think his point is do draw attention away from the house.

now why would he want to do that?

i have no financial interest in this building or literally any other building that's ever appeared on QC, and no financial interest in any real estate aside from the house in queens I already own, whatsoever, and no interest in changing that to boot. i am pissed off that either bob or someone close enough to bob to read his correspondence with me is deliberately spreading lies about me. I think it's pathetic that they would do so after I volunteered my time and professional experience in the field of historic and non-historic preservation just because I disagree with them on something. if they don't want my help I won't offer it, their track record speaks for itself. guess they don't need my annual donation either.

email EVGrieve if you want they've approached me as a primary source. meanwhile over here im dealing with this fucking crap on shit I've volunteered for. and people wonder why nothing gets done in queens.
-somethingstructural