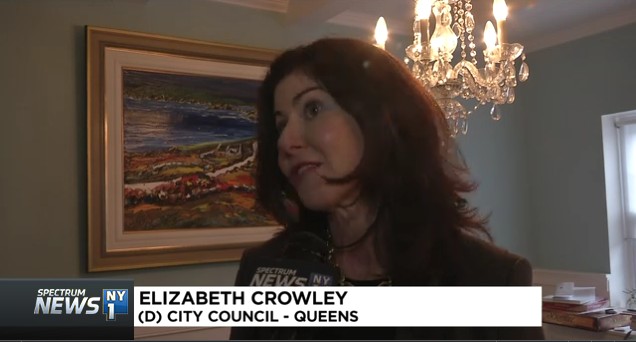 Crowley, who’s running for her third term, says her record speaks for itself, touting her success in securing funding for 54-hundred new classroom seats, enhanced public safety by hiring more cops, and preserving essential city services such as fire and EMS.

But, it may be Crowley’s support of closing Riker's Island, which draws the most distinction.

“I worry about the people who work there and the inmates there. They are not safe on that island,“ said Crowley.

Holden supports keeping it open because closing it would create more community jails.

“Why would anybody be for community jails have prisoners in the community I mean I don’t get that,“ said Holden.
Posted by Queens Crapper at 6:33 AM

Perhaps she has a financial interest in the building of new jails.

Regardless, I am sure she has plans to move to that swamp called The District of Columbia.

Watch, many of the local media, newspapers and throw-aways will rally around "Dizzy Lizzy" because they are afraid of offending her cousin "Virginny Joe" the Queens dem leader.
Holden should win because he actually cares about the area but that doesn't matter these days because the electorate is dumbed down by the lying media who care only about their bottom line. And if you want proof take a look at the Times Newsweekly. What a piece of crap that has turned into.

Miss Crowley you support it. Where will it go? Maspeth? Middle Village? Elmhurst? But not your Glendale. How about fixing the problems and the system at Rikers now!
I did not vote for you in the past and I surely won't do it now.
Recognize the impact it will have on your community or are you just selling us out?
Maybe your concerns should be addressing the crazy traffic conditions on Grand Avenue. The garbage all over the Avenue. The graffiti. We don't need a jail here. We need someone to clean up this community. Grand Avenue is not looking Grand anymore!

You worry about the people who work there. It's dangerous on that island. How about you and the mayor fix it now.
It's a jail. Not a country club. You got dangerous and violent people there what do you expect? A tea social. Prison life is no bed of roses for anyone especially the ones who work there.

Really?
Dizzy Lizzy running out of "boyfriends" and wants to become a prisoner groupie?
Put one local jail in her backyard. Then she can walk across the street to pick up some prison trade without traveling for miles.
Kinky dizzy Lizzy. She's bent over backwards for developers. Why not be "kind" to inmates? LOL!

I'm sure these will be as easy to locate as homeless shelters. Put them right next to one another, in stable neighborhoods with families, right Big Dope?

Yes because what we really need is a huge jailbreak to happen one day and for all these criminals to once again go back into society around our children and our elderly. Plus, where is there any space anymore in brooklyn, the bronx and Manhattan to even set up a new prison? We have trouble housing the middle class (which is now the low income class) and we all know that rikers island will just be another stupid developers dream of housing people who make 100k+. Why not even set up more senior living homes for our elderly who cant afford rent but yet still own their houses who maybe are looking to downsize but can't because rent is too high? If this were to happen, there would be more houses for sale possibly. Living in nyc just sucks. I was proud to be born and raised here but us new yorkers know when we are being pushed out of our own neighborhoods.

"Miss Crowley you support it. Where will it go? Maspeth? Middle Village? Elmhurst? But not your Glendale."... I'm not so sure about something atrocious going into Glendale. The Dizz has certainly stashed away a fair amount of money during her time at the City Council, and should be moving to ritzier digs in the near future. The owner of the proposed Cooper Ave shelter obviously has an 'in' with the City and that run-down building is just sitting in waiting for the next scheme.

Liz Crowley has too many screws loose.

They want to put inmates on this ankle “lowjack” devices that connect to a monitoring network if some sponsor or family member is willing to pay. Big Contract on this, my friend makes a radio component for those systems.
Problem is what dam good is it if nobody is around to monitor or enforce it. What happens when some inmate decides to car jack a head start back to Mexico. In some retirement home like 104 pct? A: Absolutely NOTHING !!
Like my friend Bills 15 year old daughter being attacked, ½ dragged in to van, near raped, punched out having to walk around a ½ dozen illegally parked tow truck & vans on Flushing ave. It took the 104pct 4 hours to show up (nighttime by then) to be told they couldn’t do anything the perp got away.
Been weeks and the tow trucks and broken cars are STILL being illegally parked on the sidewalk. Crowley, the Mayor, code enforcement nor the 104pct has done jack shit about it.
Does the public really believe the city or it contractors can be trusted to operate community jail properly ?
No, No fucking way because all involved are all bunch of liars, cheats and assholes!
This is all about converting Rikers into massive housing so the city can demand more federal $$ the working middle class public who will suffer the most from this will never see or benefit from.

I really don't understand this stupidity of closing Rikers. Do they really think that there will be no jail violence and no problems if we close Rikers and put a jail in each boro? What, are the criminals going to behave now because they are in a Queens jail instead of Rikers? This idea is absolute absurdity and I can not believe that more people aren't calling out against this.

“I worry about the people who work there and the inmates there. They are not safe on that island." We're safer if they're all in our community? So she prizes the well-being of people who signed up and are paid to keep us safe, instead of her constituents?

Holden is good, been around forever.
I remember that name when we were putting the 2 ways civilian patrol radios in the cars back around 1976.
That twit who puts knee pads on every time the mayor or some developer comes calling has to go !! I think Holden may slaughter her in the race, people are fed up with her.
And yes: It seems Crowley bailed on the homeless shelter fiasco. Yaa see it seems she only shows up to meetings when here big mouth sister and various supporters are available in numbers to run sound effects and cheerleader antics

WHAT ABOUT THE OTHER 897 ACRES OF THE PARK? WHATS GONNA HAPPEN WITH THAT??

Good looking woman, but when she opens her mouth is time to head for the exits.
Not mentioning her ideas here, you all know where to head on that one :)

OUR ELECTED OFFICIAL DON'T GIVE A CRAP ABOUT US, THEIR CONSTITUENTS. IT'S THE ABSOLUTE TRUTH!

A week ago, in a detention center or local jail in Brooklyn, 3 gangbangers threw a jail guard down the stairs.

Tell me how local jails will bring down the savagery of certain inmates, especially these lowlifes who were still being processed, or even rouge c.o.'s Ms. Crowley.

Also, the man who killed himself, whose memory has inspired the Rikers closing, Kalief Browder, well his brother is also against the closing and has called for reforms for the systemic violence and corruption. So these elected officials and those judges who wrote the recommendation to close it (including longtime friend of Sheldon Silver, Johnathan Lippman) their empathy and concern is based on bullshit.

I say lets build them Shangri La with harps, angles flying around, women, plenty of booze and dope.

Is a f...ing jail for criminals! Not supposed to be a hotel.

What happens when the crime rate spikes out of control in the near future? Remember the 70s and 80s with the crack epidemic ? Where will the criminals go? If that should happen , NYers will flee by the million. Then the criminals will haven taken over our streets and homes... Literally.

Yea, I would do here.
I noticed she's been getting much better with her appearance and wardrobe .
I remember she would wear these big blue shoulder padded outfits made her look like look like a walking pool table.
--Hmmm speaking of pool table :) :)
I wonder who helped her out they did a good job, much better she's pretty good lookin wool when she wants to be.

Huh? They come here so they can leach off of the welfare system here and "try to make it here" but once they turn into homeless beggers on the streets, then they all want to take off back to their own homes. Do you know how many homeless kids i see on the streets holding signs and begging on the train to get money to just go back home? People think its an amusement park to live here but once they see how poor the pay is compared to the prices,then they are sorry they came. Matter of fact, I have lived in both maryland and new jersey after i got married and they were WONDERFUL places to live! If I had family down there to help me with my child after my divorce then I would have stayed Maryland!