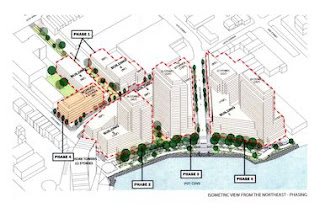 Elected officials, health workers and community activists toured an empty lot in Queens Thursday after the Daily News revealed the state is probing it for illegal dumping.

The Astoria Cove site along the Queens waterfront was supposed to be a gleaming condo development with shopping, schools and more services for the community.

But after a state tax break for the developer dried up two years ago, it turned into a derelict lot — one that has caught the eye of environmental officials.

The cluster of people who toured the site — owned by Alma Realty — on Thursday braved rains to pick their way through the debris strewn around the space.

“This is a site that clearly is dangerous to the surrounding area. We worked toward making agreements that would be beneficial to this site and we need to make sure those are fulfilled,” she said. “We do need to send a message to Alma, we need to keep the site safe and trained workers ... for their sites.”

Astoria Councilman Costa Constantinides said Alma Realty had agreed to make the job a union site — but nothing had come to fruition.

“We’re here today ... to make sure promises are kept,” he said. “We want to make sure our workers are kept safe and our community is kept safe.”
Posted by Queens Crapper at 1:44 AM

Where are all these politicians, especially Katz, at the poisonous, polluting Royal Waste Service, which was dumped in the downtown area of Jamaica at 170th St and Douglas Avenue about 10 years ago and is right next to thousands of homes and apartments, including a NYCHA Senior Citizen apartment building. WHERE ARE THEY on this site, which pollutes the ground and air while putting hundreds of trucks traveling through the area 24/7, while they pick up most of NYC's garbage, not too mention that smell that comes from this open air waste dump and the noise that comes with it. And considering how that place looks and operates, I am sure they are not following any rules or guidelines, but that is not the point. The point is, Royal Waste was dumped into a heavily populated area and right across from Detective Keith Williams Park.

So, the company (and family) name itself, Royal Waste, should be a visible clue for anyone who would even THINK to do business with these crooked, corrupt, Neanderthal-thug mutations.

As a former employee of this filthy company of sub-human debris (whose business offices are located inside of a trailer, on property that the Reali family owns, but refuses to build on it because of the intensely cheap matriarch's refusal to pay property taxes on an ostensibly empty lot). During the short time that I worked for these ugly, unstable empowered idiots (all of whom are an embarrassment to actual primates!), I've had furniture 'accidentally' thrown at me, a tyrannical, incompetent family member named Tina threaten my job (for no reason), and online pornography viewed daily (and openly) by demented brother Peter Reali, because there doesn't appear to be any government regulation within a slimy-and-sleazy, family owned trash dump that is so repulsive, that even REAL organized crime family ring goons shrug in utter disgust at the sight of these troglodytes!

But, the crowning moment of shame and danger came when one of their own workers was crushed to death by a machine operator during my first week of service, because the worker was not wearing the proper Day Glo vest while walking on the company grounds outside of the trailer offices of this toxic dump site (the least of which was toxic because of the inanimate garbage and debris).

Shortly after that, I finally took leave from that trailer from hell that is unfit for humans, passed go, collected my $200 (and unemployment insurance), and then I never looked back at the Reali den of family owned filth and openly practicing psychopathy ever again.

My recommendation to any and all sane and ethical business persons? Banish and boycott this SCOURGE before they advance to 'accidentally' knocking off anyone else who comes between their filthy garbage pit, and the even filthier money that continues to falsely empower this ugly empire of ignorant, arrogant, uneducated slugs!

What's truly sad is how the entire Reali Family behind Royal Waste (which is a nepotistic mix of father, brother and sisters, all of whom personify arrogance, entitlement, ignorance and zero education), continue to behave in ways that even animals themselves could never behave like! They all give MENDACITY a bad name!

But, anyone who would even consider doing business with a company named ROYAL WASTE, should expect nothing less than a royal waste of their time and money in the first place, not to mention having to deal with some of the mangiest (and dumbest) rats in the sewer!

You know, everywhere I look in Manhattan, towers commercial and rental, and pestilent hyper-development of unsightly new faux luxury towers, all have dumpster bins with the Royal Waste logo. This may be why they are able to get away with the shit they do since they provide a service to the perpetual money makers of the city. High end real estate.

So it's not a surprise that all the collective feces and debris of the elites gets sent to the dirty southeast of Queens, the bastard stepchild of the borough. And why any transgressions committed by this defiantly corrupt business, from traffic violations to fatal accidents on their lot, gets ignored by our so-called officials.

And will continue. Because this city is in debt to these mendacious fiends and they know it. As well as scumlords who run clusters and stingy developers who won't build unless they gouge the paychecks of their workers

But if it's an abandoned lot near a trendy niche area with skyline views like Astoria cove, then it gets the attention from the hacks in elected office and their appointees.

To Joe Moretti and JQ: Don't expect a developer's whore like Melinda 'Alley' Katz to investigate the toxic, raw sewage dump that exists on 170th Street and Douglas Avenue (a disgrace of epic proportion), when the toxic dump site itself doesn't even smell as badly as Katz and the Reali Family scourge--COMBINED!

Hats off to Joe Moretti and JQ, then, for talking truth to corrupt power, not airbrushing reality and always challenging the crooked powers that insanely be! As a resident who lives only blocks away from this 'open cancer' above ground, I gave up on this openly practiced crime spree years ago, after making many complaints to my worthless city council creep, worthless assemblyman, worthless state senator and completely worthless representative (as they have all ignored my complaints and looked the other way with impunity--a testament to how city and state government has long ago collapsed, and completely failed to represent their completely languishing constituenty, and the reason for why crime, violence, lawlessness, vigilantism and anarchy are all on the rise--and, climbing daily by the hour!