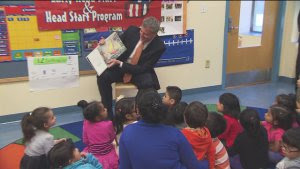 Mayor Bill de Blasio announced a plan to expand his pre-K initiative to include 3-year-olds for fall of 2017. His Pre-K for All program launched in 2014 after state legislators allocated budget funds for 4-year-old children to attend pre-K.

“We are doubling down with free, full-day, high-quality 3-K for all for our three-year-olds,” said Mayor de Blasio. “This extra year of education will provide our children with a level of academic and social development that they cannot get later on.”

De Blasio hopes to launch a pilot this year at a cost of $36 million. That cost will more than quadruple to $177 million by 2021 when the program goes citywide. Meeting that goal will require funding assistance from the state and federal government.
Posted by Queens Crapper at 12:35 AM

Let's call this what it is, free babysitting at taxpayer expense. One step closer to 'cradle to grave' Government intervention in your life.

He's using the same playbook he used when he ran for mayor. '. "Pre K for all". What a sneak.

This was also suppose to help poor working families but turned out to mostly benefit wealthier ones.

It takes a village to raise a child, you know....

bankrupting the city in order to get re-elected

What's next, are the taxpayers going to pay to clothe all the children? I suggest little Mao suits.

Move out of NYC and NY and gain freedom.

The choice is yours.

There is a lot of evidence that shows that the earlier kids start school the longer they stay in school and it increases the amount of kids that go on and complete college.

It is a lot cheaper to pay for pre-k for all then having the kids from less-off families do worse in school because their parents could not afford pre-school.


That article from the post is from 2015. The program has been expanded since then.

The boy mayor's plan when fully implemented dictates the hiring of 45,000 more teachers.
He claims that three year old pre-K will educate and prepare the tykes.

However, we must remember that NY State recently eliminated the literacy test for teachers.

"Liberal indoctrination will start at 3 years of age, says I."

Never trust a third rate, cradle-to-grave government 'Hack 'N Hustler' like Boy de Blasio. He has NEVER stopped lying, cheating and stealing——easier than he breathes! He should have been impeached back in 2014, when the PBA had the momentum to fly banners over the NYC skyline, demanding his impeachment (what happened to their movement?)!

"When people show your their true colors——believe them the FIRST time." ——Maya Angelou

He should have been impeached back in 2014, when the PBA had the momentum to fly banners over the NYC skyline, demanding his impeachment (what happened to their movement?)!

Those movement never work. They have to do something so illegal that they are ask to resign. Therefore all those trump impeachment movement is pointless and not going to do anything unless trump those illegal activities or russian connections.

Well. Now all immigrants have more incentive to breed more children and we get to shoulder the responsibility. How nice. When Deblah gets elected again, in his next election he will declare that newborns will be eligible for Pre-K. Sounds ridiculous? Just wait. Anything is possible with Deblah and our tax dollars.

But they claim that Americans arent breeding as much anymore. So i would guess that 90 percent of these kids would be kids of illegals and foreigners that once again the hard working poor class (once known as the middle class in NYC) have to pay for them once again!

Look at mayor dumbdumb in the picture reading his very first book!

He's not reading it, he's turning it aside to see if a donor predator developer check falls out.

Undocumented people coming in like crazy getting everything from taxpayers as the native NY citizens are winding up homeless or moving out of this city because it's tooo expensive.All this mayor wants is to be re elected and why can't he just put the three year olds in the free universal pre k? Hire more teachers for that.

How about a cash bonus for everyone that gets an abortion?

There are waaaayyyyyy too many poor people having children in Queens! Oh wait..that would be the newest way for men to exploit young girls.

The birth rate in Queens is absurd...babies having babies...and what does NYU cost...right..about $70K/year. If you an't afford children, don't have them!

Prior to this, only people with money were able to get their kids in school early, and those kids did better, read earlier , could write earlier and graduated at higher rates.

This is a great way to get kids into school early and boost their chances of not being on assistance latter in life.

Even the conservative state of Georgia realized this was a good idea.

I do agree people should not have kids if they can't afford them, but this issue in particular is good for everyone.

free babysitting is less work for mothers who can now work small job for bring home more money. this show mayor really care for his peoples I just wish make vote apartment and medical card easy for the men.

Cradle to the grave welfare....

"Anonymous said...
But they claim that Americans aren't breeding as much anymore. So i would guess that 90 percent of these kids would be kids of illegals and foreigners that once again the hard working poor class (once known as the middle class in NYC) have to pay for them once again!"

This scenario explains why Social Security will never substantially increase, why the Middle Class has disappeared, and why Americans who have contributed to Social Security are so upset.

We never signed up to support the world. However, NYC politicos headed by DeBlasio thinks we should. Lets vote the bums out!

You people will blame illegal immigrant for everything.
There are 320 million people in the US and 13 million are illegal.
That's only .04% of your entire population. That is not enough to cause these issues.

1) Social Security payments cap off for the wealthy. If you make 4 billion a year or 500K a year the total amount paid for to SS is the same.

2) The tax code favors the wealthy and helps to keep people from moving up. You can make 500,000 a year and take some major deductions.

3) Education creep and cost of education. The job market is far more techincal now and requires for more education but it costs 40K a year for that education.

By the way, many illegals use someone elses SS number and pay into social security but they never collect the money.

>>This scenario explains why Social Security will never substantially increase, why the Middle Class has disappeared

Anonymous said: "By the way, many illegals use someone elses SS number and pay into social security but they never collect the money."

Yes, many illegals do use some else's SS number, pay into SS and never collect the money BUT they also have their spouses and at least two children on welfare PLUS we have to foot the bill for their medical and education. SO, the amount they pay in is MINISCULE in comparison to what it costs to support illegal children and spouses in this country.

And yes, "this scenario explains why Social Security will never substantially increase, why the Middle Class has disappeared" and why American Seniors are hopping mad.

When Seniors started working at age 16 or 18, they didn't sign up for supporting foreign immigrants who are here illegally ESPECIALLY since it technically comes out of their pockets -- the real reason SS remains stagnant -- and Senior's living costs are rising exponentially.

My neighbor's monthly SS (a Senior existing on SS) was recently increased by $7.00. However, her HMO increased by $7.00 and Medicare increased $7.00. Rent and Food has also increased. How much ahead is she? The Math says Seniors were dinged not benefited.

If we stopped giving benefits to illegals to live in the United States, they would go home. There would be no reason to stay in the U.S.and our citizens who paid earned income into the SS system would be able to keep up with the cost of living IF SS funds were paid ONLY to those who contributed.

You people will blame illegal immigrant for everything.
There are 320 million people in the US and 13 million are illegal.
That's only .04% of your entire population. That is not enough to cause these issues

IF YOU REALLY THINK THERE ARE ONLY 13 MILLION LIVING HERE, THEN YOURE A FOOL! There are 2 million of them living in nyc, long island and upstate ny alone! I would bet there are about 3 million in California, 1-2 million in texas, 2 million in arizona and new Mexico, 1 million living in Florida, I am sure another million of them are in Oklahoma and colorado. Thats only mostly covers ny and the west/west southern border and florida! We didnt even get started on the rest of the states! So yea the government "claims" 13 million but we all know that if you believe those numbers then youre dumber than this idiot mayor!

IF YOU REALLY THINK THERE ARE ONLY 13 MILLION LIVING HERE, THEN YOURE A FOOL!

Amen to that! Politicians think we're stupid and constantly vacillate on the numbers to suit their agenda. They also neglect to add in all the Middle Eastern and African refugees that are now on our social security. How much more can we take in before we are all living on the street -- except illegals and refugees?