Where are you, Jimmy Van Bramer? 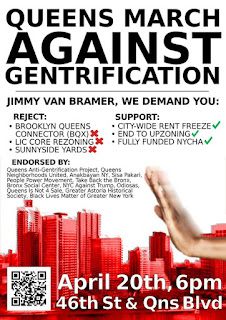 The office of New York City Councilmember Jimmy Van Bramer (D-Woodside) is keeping a lid on its reaction to a planned demonstration by a group of grassroots activists, who are objecting to his refusal to strongly oppose the over-development of real estate, amongst other charges. The group, the Queens Anti-Gentrification Project, has announced a protest march against over-development, and the protest march is planned to pass in front of Councilmember Van Bramer's District Office in Woodside, Queens. The march is scheduled for the early evening of Thursday, 20 April, according to an event posted on the group's Facebook page. For this report, Councilmember Van Bramer did not answer an interview request made by Progress Queens.

As previously reported by Progress Queens, Councilmember Van Bramer has had meetings with real estate developers, sometimes under the guise of cultural affairs work. Amongst the meetings he has had were with unidentified executives from the development firm Tishman Speyer and with the developer Bruce Ratner. In 2016, Councilmember Van Bramer attended the annual dinner of the Real Estate Board of New York. Information about these meetings were contained in records obtained by Progress Queens as a result of a request made under the State's Freedom of Information Law. According to Government reform activists, Councilmember Van Bramer's entreaties to real estate executives is explained by reports that he is running a campaign to become the next Speaker of the City Council. City Councilmembers seeking to negotiate support for legislative leadership positions attempt to establish close working relationships with real estate developers, who are a source of significant campaign contributions and who direct other elected officials to support preferred candidates for leadership. Candidates for legislative leadership positions are also known to make campaign donations to their peers in exchange for support. The role of money in politics, generally, and the role of large real estate donations, specifically, explains why few zone-busting real estate projects are ever defeated by the community. The last time a community-crushing project was defeated, in part, by community activists was in 2005, when a clash between the competing interests of State and Municipal officials ultimately led to the rejection of the planned West Side stadium supported by then Mayor Michael Bloomberg (R-New York City). The lack of democratic control over major land use issues is the subject of criticism by Government reform activists, and elected officials with close ties to real estate developers have refrained from reforming the Uniform Land Use Review Procedure, or the ULURP process, the review by which most major real estate projects win approval.
Posted by Queens Crapper at 5:53 AM

Jimmy's around, he's just waiting to see which way the wind blows (See what I Did there?)

This guy wasted tax payer time and money organizing marches, including one over Queensboro Bridge, and rallies (see the one George the Atheist posted of attendee being hassled by some goon because he was blocking the view of Jimbrowski leading a chant) against Figurehead Trump but will not acknowledge a protest of absolute significance to his constituency.

And it's not like widening economic disparity and gentrification aren't hot button issues, because they most certainly are. I suggest to the brave organizers of this march to solicit some celebrity help, that will be a way to get this lousy duplicitous hack to come out of his moneyed donor closet.

Apologies for any latent homophobia in that last line.

if i'm not mistaken, they are wasting their time
the project they're protesting is AS OF RIGHT
the law is usually still the law
so there's nothing they can do but march
hope it makes them feel good
this is an anti cop, communist group
an occupy rebranding

he wants more money to line his pockets -

If it's not protecting the 'Cultural' events that the average family within his constituency cannot afford OR illegal aliens, Jimmy-boy is nowhere to be found.

I'm sorry, I still can't get over laughing at this picture.

if i'm not mistaken, they are wasting their time the project they're protesting is AS OF RIGHT
the law is usually still the law so there's nothing they can do but march
hope it makes them feel good this is an anti cop, communist group an occupy rebranding.

ON COME ON, YOU RAISE BAD PUBLICITY AND FORCE THEM TO CHANGE THE LAW THEN IT IS NO LONGER AS OF RIGHT. PRETTY SIMPLE ONCE YOU SEE THAT.

AND THE ONLY EXTREMISM WE SEE AROUND HERE IS JOE CROWLEY'S FASCIST PARTY THAT COULD NOT EVEN RUN A CAMPAIGN AGAINST TRUMP.

PEOPLE EXPRESSING THEIR OPINIONS TO THAT CROWD WOULD BE CONSIDERED COMMUNISTS WHILE TO THE REST OF US THEY ARE SIMPLY AMERICAN CITIZENS THAT REFUSED TO BE TOLD HOW TO THINK AND WHAT TO DO.

What I don't understand with this city which supposedly is so liberal and progressive, where are all the grassroots folks from each district and why are they not putting themselves on the ballot in every single district, at least two folks, for each district, should get their name on the ballot. I know folks say you need money, but do you really need that much money just to get on the ballot, speak to a few groups, knock on some doors. The publicity itself about a wave of people who actually care and want to fight this fucked up system in every single district, would at least bring attention. In so many elections, whether it be city council or the assembly, most of these asshole politicians run unopposed and most are just idiots. Hard to believe that each district cannot find two grassroots folks who would want to run against crooked and do nothing incumbents. Maybe, then, just maybe, people would actually come out to vote. I would rather put joe blow with no political experience what-so-ever in office than vote for a Ruben Wills, a Leroy Comrie, Jimmy Boy or any of the other do nothings and corrupt.

Let's face it, change starts from the bottom.

how many people are actually going to go to this people would like to know ?

what does this have to do with NYC Against Trump ? ? ?