NYS Pavilion to get $14M renovation 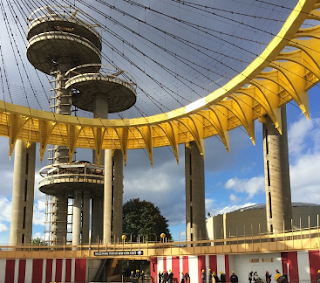 That stately space-age Flushing Meadows monument, the New York State Pavilion, will undergo a $14.25 million redesign project by the city and a team of design consultants. Construction is set to begin next spring and the design is underway now.

Before the modified monument will be open to the public, Lalor added, “significant” work will need to be done. Work on the pavilion, which is contingent upon a successful bid, is expected to begin next spring and end in fall 2019 after an 18-month process.
Posted by Queens Crapper at 6:27 AM

I usually support maintaining monuments, especially in our borough, The World's Borough, but this is a waste of money and time.

This has been rotting for decades and now out of the blue, Hostess Melinda and the elitist dummies at NYC parks wants to restore it. While many other parts of the same park is in shoddy condition. And in parks like Forest and Kissena, giant branches are falling from trees with increasing regularity. Also by Forest it is frightfully under lit. Myrtle Ave from park lane south to Woodhaven Blvd still resembles walking into a void in the universe.

14 million so developers' slut borough president alley Katz can claim she is in favor of historic preservation? Then how come she has opposed it throughout her career, favoring instead, the developers who raze it in return for campaign donations?
Just leave your money on my bead stand after you've had your way with me, boys!

The NYS Pavilion . . . Would someone please tell me just wtf this is supposed to be?

I didn't support $52m when those numbers came out in 2013. $14m I may not be 100% on board but I won't object either. It's a huge waste of space right now. Put a flea market in it or something. It's a unique structure that should be for our enjoyment.
-somethingstructural

And she wanted a Home Depot instead of a park at the Elmhurst Gas Tank park.

George, agreed: I hate to sound so ungrateful that Queens is actually getting a rare and refreshing bit of restoration money for one of its points of interest, but what exactly is the point of maintaining this structure? There's no commerce, and it serves no park purpose. It was never built to be permanent, no touring groups (as far as I know) run trips here, or even make itinerary detours down the GCP or Van Wyck to see it from the road. It's just a hollowed out shell of a meeting tent of a one-time event that no one's used except for the occasional (admittedly big-name) movie taking up space in the park.

Interesting also that there is so much preservation interest on one of the few spots where housing can't be built, too!

Put a soccer pitch in it.

A BIG WASTE!!! And Katz will have her name all over it. The Katz Pavillion. Guaranteed!

So now our politicos have "found" $14 million to spend on a rotting infrastructure but couldn't "find" the money to save The Steinway Mansion OR return the statue sent to Greenwood Cemetery from Queens Blvd.?

These two situations "together" would not have even cost $6 million. Yet, our politicos are spending $14 million dollars of taxes on something THEY want -- not what WE want. SHAME ON THEM and VOTE THEM OUT.

What exactly are they renovating? The terrazzo map of NYS is missing key elements and has been largely destroyed by the the elements, vandals, and neglect. The fiberglas panels that made up the roof blew away decades ago. The three observation towers have been ravaged by vandals and their unique elevators are gone...destroyed. Sadly, the time to renovate the Pavilion cam and went years ago.

Recently a contest was held to come up with ideas to reuse the pavilion some were pretty interesting. It is a part of the park's history and it's a visible landmark.
Sure it's in bad shape and will cost lots to fix it up but same argument was said about the Aquacade and look what we have there now in it's place.
I don't get it Americans travel thousands of miles to see buildings hundreds of years old and in this country if it's 50 years old it gets knocked down.
Just look what San Diego did with the buildings from an Exposition from around 1910 in Balboa Park, all their museums, theaters and the zoo are in a world class park.

THANK YOU, THANK YOU, THANK YOU, Seventh Anonymous, who just memorialized 'Triumph of Civic Virtue' (that was robbed by Borough Hall thugs from Queens Boulevard in the middle of the night), for whom I personally fought with Czarina Melinda 'Alley' Katz (and her walking corpse of her now dead predecessor, Helen Marshall), for years, in order to return the robbed Civic Virtue to its lawfully home base at Kew Gardens Plaza, instead of languishing for nearly five staggering years inside of Green-Wood Cemetery, where it has been cleaned and all dressed up, without anywhere to go as it stares down the dead and obscure every day that it remains in captivity!

(Actually, this breathtaking monument didn't even require a costly and dangerous eviction at all, in order for a simple cleaning to finally prevail, which would have cost less than $50,000. And, the reason for why it was intentionally neglected in the first place was because of another walking corpse named Claire 'The Sycophant' Schulman, who climbed out of Donald Manes' butt to become one of the most disgraced Queens Borough Presidents that followed her equally corrupt protégé [now thankfully deceased after Manes committed suicide in order to avoid facing criminal prosecution for his egregious, and openly practiced crimes within the Koch Administration of epic fail], as Sycophant Schulman proudly reinforced the continuation of one of the most disgraceful lineups of terminally crooked, corrupt and failed female leadership that now DEVALUES honesty itself!)

Alas, in the criminal world of Melinda Katz, no crime is too big to commit (whilst screwing We, the People with impunity), and the public be eternally duped, bilked, scammed and damned!

BRING BACK TRIUMPH OF CIVIC VIRTUE, all BOROUGH HALL THIEVES! It's OUR tax dollars that we demand to be spent on what matters to OUR community! THIS AIN'T YOUR PERSONAL SLUSH FUND, ALLEY KATZ!

>Also by Forest it is frightfully under lit. Myrtle Ave from park lane south to Woodhaven Blvd still resembles walking into a void in the universe.

You make that sound like a bad thing, rather than a welcome respite from an overlit city.

>at exactly is the point of maintaining this structure? There's no commerce, and it serves no park purpose.

It looks cool and unique. That's reason enough alone - it's something people from all over the world see and think "Queens". It gets torn down, there will never be another. What else would be put in it's place?