Cuomo once lived like a king in a Queens mansion 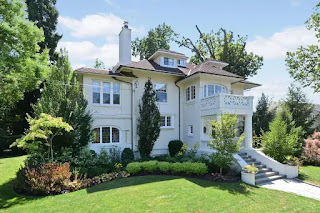 For the price of a Manhattan one-bedroom apartment, you could rent an entire Queens mansion that was once owned by Governor Andrew Cuomo—for a little while, anyway. The governor’s former home in Douglaston, Queens sold last year for $2.4 million, but it’s back on the market as a short-term rental, available from July to December. The price: $5,500.

Cuomo lived in the home with his former wife, Kerry Kennedy, for a few years in the 1990s before selling it in 1993 to join Bill Clinton’s presidential campaign. It has the distinction of being the last place that Cuomo lived in Queens, his home borough—though it’s a far less humble place than the Holliswood home that his father, Mario, called home for many years.

The Cuomo house is part of the tony Douglas Manor enclave, a close-knit community where families tend to hunker down and stay a while. It has six bedrooms, four bathrooms, plenty of outdoor space, and close proximity to the waterfront.

Its current owners are Elias Roman, once the CEO of the now-defunct music-sharing app Songza, and his wife Sarah Jane. Fun fact: It may also be the “sister home” to a now-demolished Long Island mansion that served as F. Scott Fitzgerald’s inspiration for The Great Gatsby.
Posted by Queens Crapper at 1:36 AM

I live in a studio apartment in Forest Hills. Sucks to be me. Well, at least the damned thing is paid off. I never thought that owning a 1-family house in Queens would be a pursuit only fit for millionaires.

Of course Gargoyle Andy has left the stench of Cuomo over other parts of Queens for many years. I'm sure not too many know of the bar fight that caused a death during his misguided youth in Holliswood.

No, tell us more about the bar fight in case Avella's Bill gets passed (should it pass it takes effect immediately)
Makes total sense because the guys background cant be anything else but a thug
Both parents = thugs in my opinion too.

I remember his mother had something to do with N Shore hospital in Manhasset back in the late 80s where she was always commandeering office equipment and fax machines for some bullshit, literally pushing staff around with her hands and threatening to get them fired.
It happened to my sister attempting to fax medical stuff, Mr.s Cuomo pushed her BY FORCE and threatened "get out of here come back later, I'll rip it right out of this god dam machine and have you fired"

Literally a near full out BRAWL, I swear to god its a true story

No one ever mentions that Andy was a "Frequent flier" at the 111 Pct ... hmmmmm?

This totally clashes with his common man stories he has been telling lately.

I can see Mario's son being an entitled juvenile brat and manchild in his 20's too.

Basically young Andy had quite the verbal tiff at a local watering hole within sneezing distance of the Cuomo Compound on Pompeii Avenue. The verbal spat spilled outside on to Hillside Avenue where a participant somehow wound up being pushed in front of a bus.

Despite my hatred for Mario's son, tread lightly with these stories if there are no solid facts or any documented reports behind them (maybe check your local library for old news papers, ha ha ha). Although these bear an almost uncanny resemblance to sordid stories of the young Kennedy transgressions involving public drunkenness and in the case of this bus accident, a Mary Jo Kopechne like accidental murder.

Is this the source for these rumors?

Oddly enough, I also had a bar fight in my 20's where I broke another guy's face. I had to go to Rikers for it. 1st Offense. Must be great to be well-monied and politically connected. I also know the scumbag, sociopath son of a cop who has like 25 misdemeanor arrests yet never got a jail sentence. It is the luck of the draw.

Andy's fracas was a bit before my time but came up in discussion with a bus operator working out of Queens Village since it's opening. Alas, dead men tell no tales.

Ah yes good ol Andy the Gargoyle.
Never a really tough guy but always had backup, and all kinds of it. He was BANNED from both Ryan's Bar on Hillside ave and Francis Lewis because not only because he was an pain in the ass but also what we called "what a a'O friggan dick"
Andy was in a drunken stupor argument with another individual who mysteriously wound up underneath a city bus when Andy & this large individual stepped outside the bar to settle things. Witnesses were coerced and favors were called in...this case will forever remain closed...the news media was warned not to pick up or follow this story, including even to clarify this incident.

I also heard story's (from several different sources) of cars going for rides without keys, drugs, booze, people getting beat up pretty bad but never actually witnessed any of it myself.
He think his current wife is that blond chef Sara Lee who makes the super cool Halloween cakes & cookies.
...it must be nice to be King Andy!!

I think all this dirt on Cuomo acting like some bar crawling bro schmuck is going to come out once he makes his presidential run official.

Let's keep the Cuomo punk feed rolling, there was a story in the Daily news that was overlooked a month ago about how he menaced a convict who he thought was involved in that prison escape upstate. And how he was roughed up by 2 C.O.'s after Mario's incorrigible son gave him the stink eye.

This from the guy who thinks Rikers is

In fact, it's similar to George W Bush's fratboy shenanigans as a young trust fund manchild

If there were any justice in this world, his four offspring would be sterile to stop that Cuomo/Kennedy gene pool from further infecting the earth.

Sadly no dirt will come out once he makes his presidential run official.
The media and all the liberals that want another thug like Obama and will make sure all the dirt stays in the ground. Very much just like Obama's forged birth certificate was kept under wraps in the name of "best for public interest"

If this scumbag becomes president anybody who owns a home or has substantial savings will need to move to Costa Rica. This asshole has already screamed on TV "if you wanna own guns and don't like to share with your fellow man New York is not for you get the hell out"

In fact, Emperor Cuomo's entire staff at the 'Executive Chamber' kingdom in Albany is equally corrupt, dishonest and derelict, if not worse. I have personally spoken to Andy's chief of staff, Catherine Montrose, and his scheduling and appointment coordinator, Carey Maloney, and both are aware of the corruption, fraud and cover-up case that I spoke to them about in the Fall of 2016 (likewise, Mayor Bill de Blasio's sophomoric, instensely incompetent, dismissive staff of high school dropouts). Despite the urgency of the matter, both public servants within the Executive Chamber were hostile, arrogant and unresponsive, as they hung up the phone on me (repeatedly).

So, the slogan 'If you see something, say something' does not apply to Albany henchmen and City Hall, and now there is a reinforcement crew to ensure that all rank and file 'taxation without representation' is ignored with impunity.

And, that's why thousands leave New York State every year, because of the endless, free-flowing corruption at the top that continues to 'shield and protect' a Teflon dictator like 'Gargoyle' Andy, like all filthy-and-failed political leadership, couldn't care less about our New York State government, its ravaged people and the freedoms and liberties that USED to be ours to enjoy!

The story I heard from a pretty good source about Andrew pushing someone in front of a bus is that the guy pushed went by the name of Jerry Sperio. Don't know if that spelling is right. He and Andrew were friends and hanging out at Ryans bar that used to be on Hillside Ave off Francis Lewis Boulevard one afternoon and started horsing around and the bartender threw them out. They kept up the pushing and shoving out on the street and it ended up in the parking lane on Hillside Avenue-- that's when Jerry got pushed in front of the bus in the traffic lane. The bus driver took the fall. He was a black man who was speeding because he was late for his run to Belmont, and had been drinking with his coworkers, and was driving under the influence. I heard another story about how Andrew and Jerry were rivals for the affections of a girl named Karen whose parents owned some bakeries and that's why he pushed Jerry in front of the bus but I find the first story more credible. Anyway, I wasn't there, that's just what I heard.

I heard a very similar version of the same story about Andrew Cuomo a few years ago from former law enforcement. I heard the story told as it was a bar fight in Queens, NY and the victim's name as Jerry Spero or Jerry Spirro but maybe it was Sperio.

Like another poster said, a good search of local death records or newspaper obituaries may tell the story - unless those have been scrubbed already.

I worked at Ryan's back then. Andrew and his best friend were horsing around on a Saturday afternoon in Ryans. Pushing each other back and forth - not mad - just goofball friend. The bartender made them leave and when they went outside they continued. The friend was pushed in between two parked cars - went into the street and was hit by a bus.

James Vincenzo Spirio was the name of the victim.

Yes, Jimmy Spirio. Story is 100% true. Whether it was an accident or not is the only unknown.

The graves of James Spirio, Gerard Spirio and their parents are buried in the same place, Cypress Hills Cemetery and have absolutely no headstones. An established family in Jamaica Estates burying their youngest son, James in 1980 with no headstone? Go see it for yourself. Why are the rest of the family there with no headstones?