The Crowley court suspension is over 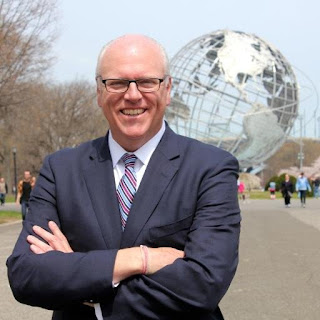 Relatives of Congressman Joseph Crowley, chairman of Queens Democratic Party, are once again picking up appointments and payments from the borough’s Supreme Court—six years after anti-nepotism rules banned members of the clan from profiting off the system.

A minor scandal broke out in 2011 when reports arose that jurists in the borough had handed out lucrative temporary work to Bernadette and Theresa Crowley, cousins of the party boss and sisters to Queens Councilman Elizabeth Crowley, at the same time that their other sister Margaret held a six-figure clerking gig under Supreme Court Justice Darrell Gavrin. State strictures forbid lawyers from getting court-ordered assignments in a judicial district where a member of their nuclear family holds any moderately well-compensated position.

And so began a four year hiatus for the Crowleys from Queens Supreme Court. But state payroll records indicate that Margaret Crowley left her job a few months into 2015, and her family members began scooping up appointments from Supreme Court judges almost immediately afterward.
Posted by Queens Crapper at 1:29 AM

"Power tends to corrupt, and absolute power corrupts absolutely. Great men are almost always bad men, even when they exercise influence and not authority, still more when you superadd the tendency or the certainty of corruption by authority. There is no worse heresy than that the office sanctifies the holder of it. That is the point at which the negation of Catholicism and the negation of Liberalism meet and keep high festival, and the end learns to justify the means." - John Dalberg-Acton

He's a jerk. Can't speak, think, or sing to save his life. He reminds me of Trump in some ways.

"And remember, where you have a concentration of power in a few hands, all too frequently men with the mentality of gangsters get control. History has proven that."

Trump is the culmination and hopefully or dreadfully, considering the Syria poll boosting bombing and the North Korea escalation the tipping point of the duplicitous opportunist politician.

That said, Crowley might not escaped unscathed. Despite spending their whole careers luckily escaping prosecution, even the establishment hacks get caught once in a while.
If there is recent comparison, I think it's that pedophile Dennis Hastert.

Anonymous said...
"He reminds me of Trump in some ways."

and yet, he WILL be re-elected and with a huge margin of votes

And imagine, some day when he is no longer with us a park, a school, a street, a bridge, a courthouse or some municipal edifice will be named after "Virginny" Joe.
The sooner the better.

What's really scary is the Observer calling Crowley a rising star of the Democratic party. Makes you wonder about the rest of the party

They don't even try to hide the corruption.

"And imagine, some day when he is no longer with us a park, a school, a street, a bridge, a courthouse or some municipal edifice will be named after "Virginny" Joe.
The sooner the better."

WHY WAIT UNTIL HE'S DEAD? LET'S NAME A MENS' ROOM URINAL IN ASTORIA PARK AFTER HIM NOW.

>and yet, he WILL be re-elected and with a huge margin of votes

Of course. He brings home the bacon for them.

He controls the entire borough, but only has to worry about being reelected in his district.

Careful any views a politician deems to extreme or effective to an election can get you fined $250 a day + jail + your IP suspended under some new NY State internet speech bill coming down the pike.

The corruption, graft and greed are so completely entrenched and establishment-rigged, that these empowered idiots are fearless and exalted. That's why 47% of voters stayed home last year for the General Election.

A country that reinforces a two-party-machine-failed system is a nation that no longer practices democracy, and we are now far beyond the point of failed democracy within the 'UNITED STATES of AMNESIA and ENTERTAINMENT.'

When the F**K are our people ever going to learn to NEVER trust any and all politicians, when they've already betrayed flag, country and Constitution SO completely, that they now DEVALUE all honesty itself—to pathologically high treasonous, traitorous and tyrannical effect?

Whether it be any and all corupt Queens/NYC politicians, orBernie, Tulsi, Nina, the Pinta, the Santa Maria—HELL, even Barney the Purple Dinosaur—aren't going to do ANYTHING to help our ever languisning, rapidly vanishing (and government dependent), American middle class (and whatever manages to survive below), because, despite the tough talking diatribes, escuse-a-thons, delay-a-thons (and 300% fakery), their REAL allegiance and loyalty is, and always HAS been to their two-party-machine-failed bosses, and corporate fascist owned slavemasters, all of whom have got their voracious tentacles in all branches of government (Federal, municipal, state, city and county), and dutifully recite the OATH of PUBLIC NUISANCE OFFICE that wrongly maintains: 'Don't Blow MY Scam—And, I Won't Blow YOURS.'

Then, it's back to the usual, contemptible loop of lies, deniability and a 'Delay, Deny—And, Hope That You Die' anarchy that is FOISTED upon We, the People with impunity, until before everyone knows it, it's 25 years later, and our political SCOURGES have reached their disgraced-and-tarnished, cradle-to-grave retirement age (for which every single taxpayer has involuntarily paid a soul-crushin price) of power, privilege (neither of which has ever been earned, much less deserved), unjust enrichment, openly practiced government tyranny (that is protected-and-shielded by the corporate fascist empire that owns them), and PRIVATE SPLENDOR—versus, PUBLIC SQUALOR, adversity, beggary, obscurity and quiet desperation for everyone else in the rank and file—and, the public be eternally duped, bilked, scammed and damned!

Finally, if We, the People don't challenge authority, then we shall have to resign ourselves to affirm the tragic meditations of the late, great George Carlin, who correctly said: ❝America has owners.❞ Here is why:

Once again (and still), the 'UNITED STATES of AMNESIA and ENTERTAINMENT' is ramping up to forcefully take what Carlin correctly describes as ❝...that big, red, white & blue dick that's being jammed up their assholes every day...❞ (which is what the 'owners' count on—WILLFUL ignorance).

❝Because, the 'owners' of this country know the truth. It's called the 'American Dream'—because, you have to be asleep to believe it.❞ —George Carlin


Do tell how you suspend an IP address.

"Do tell how you suspend an IP address"
----------------------------------
I don't want to go off topic however that the OP never said that your switching words around.
"IP suspended" was the words. Meaning your internet provider receives an order to completely or limit your internet service and hand over your info, including logs.
(in most cases your access is limited to POP a d SMTP servers for email)
If you read your internet contract they co-operate with government requests.

Senate Bill 4561, its deliberately written in a non descriptive way to allow them to come after you for generally anything they dont like.
It aims to censor what people say, under a broad, vague test based on what the government thinks the public should or shouldn’t be discussing with ABSOLUTELY NO exception for political figures, prominent business people and others.
Word like ‘inaccurate,’ ‘irrelevant,’ ‘inadequate’ or ‘excessive’ “no longer material to current public debate or discourse" mean ANYTHING a public figure the dont like ◦
It is clearly unconstitutional under current First Amendment law, and I hope First Amendment law will stay that way (no matter what rules other countries like Russia, China, N Korea, might have adopted.

Meaning your internet provider receives an order to completely or limit your internet service and hand over your info, including logs.
(in most cases your access is limited to POP a d SMTP servers for email)
If you read your internet contract they co-operate with government requests.


You don't know much about how this damn Internet works pal.
As for bills, spying, hahahaha that's been going on for years!
They even had lawsuits about them.
Check out this about room 641A: https://en.wikipedia.org/wiki/Room_641A

Whatever is happening today, most of it is unconstitutional. But they cannot stop ideas, how people think, how they feel, regardless if they are medicated, fed GMO foods, drugs both legal and illegal. Ask the commies, did they ever succeed?

So my next comment will be posted from China...or maybe Russia. Just for fun.

Static or dynamic--Internet providers can cut your routers access the same way like when you don't pay your bill.
Go to McDolnalds for Wifi

You don't get it:
This dam bill forces blog & web-sight owners to be the police and enforcement on behalf of the scumbags at gunpoint. They must remove any comment some politician or hotel owner (for example) asks. EXAMPLE 1 cut anything some politician feels isn't nice that may impact on election results. $250 per day fine (each post) plus possible libel litigation.
Most your websights like Drudge Report and blogs QC will be gone in no time and that is the #1 mission for progressive democrats right now.

DeBlasio is really pissed at Curtis Sliwa's and this blog over the negative publicity for his homeless shelters. Our worst politicians love bill #4561

You don't get it:

No, you don't get it. And never will. These things are unenforceable. They know it, we know it (except you). You can post from a million IP addresses and good luck tracking them down. Comprende amigo?

Static or dynamic--Internet providers can cut your routers access the same way like when you don't pay your bill.

Go for it. Let them cut it and we still be connecting, there are many ways to connect.
Cut service - no money for them, Win-Win if you ask me!

Friggan moron "You can post from a million IP addresses" but your not posting ANYTHING if the blog has been removed or the moderator is not willing to take a chance on libel with your post.

Now if your some wise-ass dipshit thinking your gonna use Tor, relays, nodes assorted VPN (Virtual Private Networks) for secure and anonymous web shenanigans then “rule 41” was written just for you as the Federal Rules of Criminal Procedure has changed as of last month.

The new spying “rule 41” of the Federal Rules of Criminal Procedure grants new powers over US constitutional law to not only issue search warrants for the law enforcement but also legally remotely access devices that are using privacy tools and the **USERS of those privacy tools** like TOR and VPN and legally use it against them. Federal offense BTW, they can toss you in the crapper with terrorists and deny you an attorney.
Also connections VPNs and proxy server are tracked & logged (yes hey always been snooped) s long as you are on US soil they can NOW legally used this data against you and grab you for investigation---no constructional protection applies.

--Now go sit in the corner with your buddies Tor, Cyberghost, IP2 shut the f_ck up and lurn yourself somethin !!
Jeez I'm just a mechanic with a HS education and know more then you !