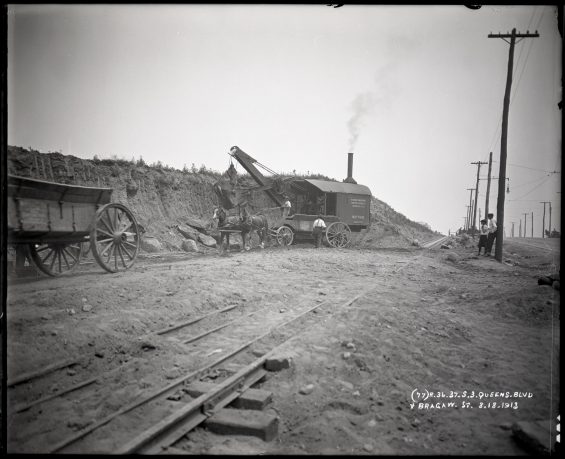 The commemoration ceremony will kick off at 1 p.m. and there will be several speakers who will talk about the impact the train has had on the city and what’s needed in the future. The ceremony will take place on the Flushing-Bound Platform on the lower level at Grand Central.

The centennial ride will leave Grand Central around 2 p.m., which is the exact time that the first 7 train to go in to Queens left Grand Central 100 years ago.

Hopefully service doesn't get suspended as it did earlier this week. That would be pretty embarrassing.
Posted by Queens Crapper at 5:45 AM

That's why it's dying: old age!

Is John Rocker giving the keynote address @ the commemorative ride from Grand Central?
That be great !!

what's the point of having anyone speak, its not like English would be understood by a majority of the ridership. World's Borough for the win!

And the signals they use on those tracks are just as old!

Remember, nothing he said was ever disputed, only that he said it.

I used to think what awful things he would have said if he played in the American League and was taking the train to Yankee Stadium!

Hopefully the problem that shut the whole line down in both directions Wednesday happens again during this ceremony.

I love the John Rocker referneces. No matter how many years go by, I will never forget how the guy was CRUCIFIED. Even then, this out-of-towner observed stuff that was so messed up that he just had to say something. Free Speech? No.

I have the John Rocker rant framed next to a pink panther cartoon velvet painting in the bathroom. In the the painting the Pink Panther is sitting on a toilet bowl tagging "Welcome To Queens" graffiti in dripping letters.
Anyway here is Rockers original classic rant (before the editors got to it)

"Hell, I would retire first. It's the most hectic, nerve-racking city. Imagine having to take the 7 train to Shea, looking like you're riding through Beirut next to some kid with purple hair next to some queer with AIDS right next to some dude who just got out of jail for the fourth time right next to some 20-year-old mom with four kids. It's depressing."

On New York City itself: "The biggest thing I don't like about New York are the foreigners. I'm not a very big fan of foreigners. You can walk an entire block in Times Square and not hear anybody speaking English. Asians and Koreans and Vietnamese and Indians and Russians and Spanish people and every dam thing thing up there. How the hell did they get in this country?"

On Mets fans: "Nowhere else in the country do people spit at you, throw bottles at you, throw quarters at you, throw D batteries at you and say, 'Hey, I f_cked your mother last night -- she's a great whore. !!

“I hate Rocker, but I have to admit the guy has ridden the 7 train.” - Colin Quinn

John Rocker although making himself a kabob skewer in the press was still 100% correct on calling this mess 10-15 years ago.

Even Curtis Sliwa calls it the "John Rocker Express"

Today an power outage on one station in Manhattan, the 7th avenue stop in Midtown, put the entire subway system in disarray. And they want to do some commemoration for the 7 line, why? Who are these doe-eyed bozos? Why do we have a museum for transit? As I previously noted before on my own blog, the worst transit system in the fucking universe is still using the same antiquated switch and signal system, busted rails on random lines and platforms and stations that still look dilapidated (Lefferts anyone?). All us commuters are riding the museum every day.

Only the MTA can summon John Rocker nostalgia back. (Even though he's quite a bigot, I thought what he said was funny back then and interpreted it as a way to rile up the Mets, it actually worked)

I am more of an Al Hrabowsky fan.

More than half of the comments on above are in support of racism. The 7 train and MTA has a lot of problems - that is what the conversation should be.

Yes, the 7 train and MTA does have a lot of problems which is exacerbated by overcrowding and the overpowering smell of garlic on everyone's breath -- except yours -- which is why you almost have to heave. Well, what do you expect on the Orient Express? Glad not to have to use that line anymore.

The 7 Train is a great enabler of the wonderful diversity that powers Queens and the City in general.