Is this our future? 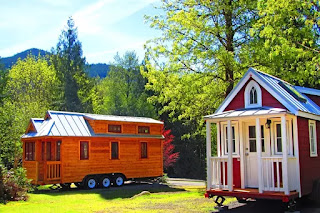 Portland, Oregon, is considering a novel solution to creating more homes for the homeless and housing-insecure: backyard tiny houses. Like many U.S. areas rethinking their approach to homelessness, the city is suffering from an affordable housing shortage, and the two-year timeline for building convention shelters and supportive apartments just isn’t fast enough to meet the demand of some 24,000 units. The new tiny house alternative, led by the county government, involves the construction of accessory dwelling units in suburban backyards where small homeless families of 2-3 people will be able to live rent free.

The initiative, called A Place For You, is launching with a $350,000 pilot project to build an initial set of just four homes on private property, with families moving in this summer. In exchange for housing a homeless family for five years, the property owners will get a tax abatement and the tiny house—which they’d eventually be able to use or rent out.
Posted by Queens Crapper at 10:14 AM

And it's oh so trendy. TV shows etc. If it wasn't they wouldn't be looking at it so much.

Many NYC homes would not have room for these tiny houses because of the tiny backyards. The urban version of this is the cellar apartments discussed here a couple of days ago. God help us all.

This must be fought at all costs, look at the cheap "railroad" shacks in New Orleans turned into.
As expected from Portland, a city of Bernie fan socialists, drug addicts, self titled musicians and artists who don't want to work a real job yet demand society owes them fee money, housing, healtcare and things.
I doubt this could work in NYC, not enough available land unless they would have stack these shacks cabins back to back and perhaps 6 high. No abundance of trees and lumber industry scraps to burn . These shacks would need to share a common HVAC systems to be cost effective in NYC climate.
Its cheaper and more efficient to build a big 6 family box, builders are all greedy bastards so this wont happen.
Could you imagine a community of these burning wood, coal and waste oil like back in the 1800s
Portland is a mix of white trash aging hippy flakes like Northern California where you can hear Jerry Garcia & the Grateful Dead blasting out of every window. Along with the nasty stench of Hash & Marijuana that makes you so nauseous you get dizzy and feel like your gonna vomit in the street.

That's the type of people who go for these shacks and NYC has enough of them. Take a walk through downtown Brooklyn or Williamsburg on a Friday summer evening, HOLY SHIT !! Now a place where you can sip your $9 wheat grass juice (or home made paint bucket beer) and think your on another planet, !!

There isn't any room!! The only room is in long island or upstate ny. I make 65k/year and couldn't afford a house in NYC even though I was born and raised there. I ended up moving to the boondocks in long island to afford anything. Too bad NYC puts the middle incomers last and cater to the poor and rich only.

Then you could stack them vertically and/or horizontally. They would be built with a 3D printer remotely then dropped in by drone. If you move you can take your cube with you.

Multiple cubes can come together to make single family home or other cubes can be kept as separate apartments.

Gracie Mansion has a lot of lawn space unused.

Here it will be called "A Basement For You."

Housing prices are so high here, this could be a solution not for the homeless, but for us working class folks.

People have a lot less stuff then 5 or 10 years ago...no big screen TUBE tv's NObody has bookcases filled with books lp's cd's VHS...none of that all gone, we moved from 5 rooms to 3 and actually have more room because we have 3 big double closets and not 3 tiny ones. and an eat in kitchen...

Will homeowners be forced to house the homeless ? That's coming next.

There already is a backyard tiny house up the block from me in Elmhurst! Yay, we are so advanced! You see, a homeless couple found an old shed in a yard behind a house up the block; they just walk right through the front gate to get to the shed. I know that the house is occupied by several unrelated tenants but I'm not sure if the owner lives there or knows of his shed occupants.

I have "A Place For You,", the homeless.

It is called an all inclusive, one way ticket to beautiful downtown Portland Oregon...

I'm disappointed to see Anonymous thinks artists "don't want to work a real job." Speaking as a cartoonist who works more than forty hours a week, I can assure you it's a real job. I notice Queens Crap uses the occasional cartoon to illustrate an important point. Somebody has to create that cartoon. That takes work.

I also highly doubt that this plan means "homeowners [will] be forced to house the homeless," as another Anonymous wrote. There's enough to criticize about the plan without predicting the elimination of the Fifth Amendment.

Sounds good. Start parking these on Queens Boulevard and other main roads. The homeless can string laundry lines over the sidewalks, and make fire pits for cooking.

All the new storage facilities beg to differ. :-)


Don't switch words around and mislead readers like the stinking media and liberals
READ IT !!
Anonymous said "self titled musicians and artists " As in referring to all the jerks parachuting in acting like #1 wile making #2 (Aerosol art, Hot tubs and naked bush shows on roofs is one example)
As in NOT referring to professional IA commercial artists, read IT !!

This is not any different than the dozen or two RVs parked all over NYC with people living in them.

The RVs you see around the city are Class A self contained motor homes and 100% legal. Those people go home an don't flood our school system.
This is what happens when hotels cost $300+ per night plus a 20% tax.
The city also needs to relax on Airbnb and ask why all these hotels are charging near 15X the nightly rate in Tokyo/

You can buy these sheds at Home Depot.

>Sounds good. Start parking these on Queens Boulevard and other main roads.

Joke's on you, the mayor's getting rid of all that parking to keep people from driving and shopping.