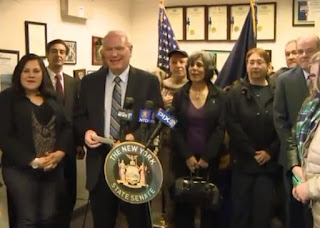 A large number of Queens civic leaders gathered at State Sen. Tony Avella's office this afternoon to speak out passionately.

According to State Sen. Avella, Mayor Bill de Blasio, who several years ago first talked of legalizing basement apartments, is now revisiting the issue as a solution to the city's affordable housing crisis.

Currently, there are over 100,000 cellar or basement apartments being rented illegally city wide.

"Any legalization of basement apartments would be based on their meeting safety codes to protect residents. A multi-agency working group, including HPD, DOB, FDNY, and DCP, is working with Councilman Espinal and multiple community-groups active in East New York to study the feasibility of a basement legalization pilot program in that community."
Posted by Queens Crapper at 12:09 AM

They are doing a study in ENY in goddamn Brooklyn, how convenient. That's a good way for scumlords to jack up the rents and bring up the AMI, that way none of the obligatory 20% of affordable housing will not be affordable. The reason for this is probably because the canarsie tunnel by shitty ass Williamsburgh will be closing down soon and the hipshits are going to need a spanking new place with sanitized grit and blight to play all day.

What these fauxgressive neoliberals should have been studying the past 3 years are the reasons poor working people and families were getting kicked out of their apartments in the first place. Because of all these bastards they are relying on to fulfill his failed plan to build and maintain 200,000 affordable apartments. The most recent one is that scumlord parasite polluter from Alma Realty

As a former long time basement dweller, in fact I used to live a block down where they are parking those trucks on the conduit, this can be done correctly and tenants have to show more responsibility for their safety and security, but this looks like the plan is, judging by the sound of this tax money pissing study, that this will only be taking advantaged of by new homeowners and actually will cause rents to rise, since there are imbeciles coming to NY to pay 2000 for a damn studio on the bridge view coasts of Queens, Brooklyn, and even the Bronx.

People should realize that simplifying the problem by suggesting that if people can't afford to live here they should move will not improve anything. Since the issue is that these people can't afford to move. Right now in this obscenely expensive city, an occupation like a nurse or an EMT (and maybe soon enough, a rookie cop) can't even come close to paying the market rate rent let alone barely get by on a cheaper one living in a basement.

This is all because the last mayor Fun Size bloomberg went out of his way to make NYC a luxury product and Brooklyn a brand over places to work and live for citizens and the current Big Slow is just continuing it to further his true liberal agenda, promoting himself. Both of them are the reason homelessness exacerbated.

I empathize with the folks railing against this, but a game of divide and conquer is being played here. This has been going on way before De Faustio, he's just using this to fix the shitshow he helped create by doling out welfare zoning permits to his campaign p.r. friends predator developer clients (which is now legal to do).

Ok Moron Mayor
You legalize basements so now you can tax the income. You make landlords file permits and "make them legal". Guess what JACKASS! The rent goes up. Hence defeating the purpose. But you know that. This is just for tax revenue.

Wonderful news for the insurance companies. Most of these illegal conversions have faulty wiring and are very dangerous.

Going back in NYC's history 100 years to bring back tenements, this is hardly what you could call 'Progressive'. Jacob Riis is rolling in his grave. This will make already unaffordable real estate a little more unaffordable and deBlas is salivating over the increase in property taxes. It's gonna be more rats to fight over a shrinking piece of cheese.

After 20 years of renting my basement to afford the mortgage now you want a piece of it?? NOT HAPPENING MAYOR DADUECHBAG

Uh of here they come !!
Right to your door with that single mother of 4 (who will soon be pregnant again) and a HUGE fine and new tariff if you don't take her.
Look on the bright side, De Fausito is sure to make it real easy to get legal.

The good thing about that when your offered to take Section 8 you are guaranteed government money. And, if they screw it up, the government pays for it and the assholes lose their Section 8 and are carted off to a shelter. These days its the only way to do rentals that guarantee payment and the condition that your house not get destroyed WITH that guaranteed payment.

I just had a good buddy of mine get screwed by HIS OWN FRIEND within the first week of the lease bringing in not only a woman and kid but her nasty noisy dog as well.
Now it 6 months in housing court, 2-3 years if that woman is pregnant or gets that kid registered in a local school.

It's very risky.. sometimes it works out, but in MOST cases it doesn't and the courts ALWAYS give the tenant the upper hand PLUS 30 or so 3rd chances.

Not to mention - no exits. One way in, one way out. In case of an emergency like a fire this translates to NO WAY OUT!

Where's Falasheng? Is that near Middle Village?

After a few tragic fires, and the conflagrations consuming entire families, AS ALWAYS, the government will be called in to "fix" these self created problems...

Flushing Chinatown or Mandarin Town is one of the largest and fastest growing ethnic Chinese enclaves outside of Asia, as well as within New York City itself. In Mandarin, Flushing is known as "Falasheng".

Kind of like a civic version of the Reichstag fire

more like the Soviet flag over the Reichstag in 1945
What the mayor is doing is forcing integration into private homes and these bastards will find a way to penalize a homeowner with an unused room or basement.

Also once you can establish 1/2 million or so more legal addresses you can register all those people to vote and emaciate the last red voting districts.
DeBlasio "pilot" program is a TROJAN horse !!!

In industry a problem is analyzed and the root cause determined.

From there a solution, or no solution, may be properly determined.

Government and the incompetent politicians have a knee jerk reaction and do something for the sake of saying "we had to do something".

When will we wake up and see the never ending cycle of government failures???

This will turn NYC into New Delhi.

1. We need housing (not "shelters)...
2. We need housing, not local institutions concentrating populations of drug addicts/severely mentally ill
3. Solutions must be contextually appropriate
4. A cellar is not a basement. People cannot and should not live in cellars. It's not safe, and nothing will make it safe (well, maybe if you spend a truck-load of $$$).

Not enough schools/infrastructure not able to handle/not enough parking/dangerous/expensive to bring everything up to code -- nothing good about this situation, but DickBlasio isn't exactly someone who thinks things through. Unfortunately this will go through AND the ass will be reelected.

There's so much FUD in these comments I can only assume no one has actually lived in - or even seen - an actual basement apartment. Which are basements, not cellars, and have their own exits.

Also, by law, you can discriminate in who you rent to when you're renting out part of your own house.

>Flushing Chinatown or Mandarin Town is one of the largest and fastest growing ethnic Chinese enclaves outside of Asia,