As East New York goes, so goes the rest of the city 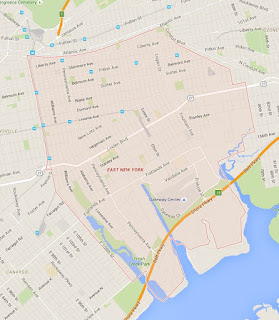 East New York is the first neighborhood to be rezoned under de Blasio's plan. Many, including Comptroller Scott Stringer, worry the plan will cause a ripple effect of rising rents in existing buildings.

"Instead of strengthening the affordability of this community, the proposed rezoning would instead serve as an engine for displacement," Stringer said.

There are nearly 22,000 units currently in the area, largely in two- to four-family homes that are not subject to rent regulation. Stringer believes that those tenants are at risk for being pushed out if rents across the area start creeping up as a result of the new development.

YES! And if the Zoning for Quality and Affordability gets passed then that exact thing will happen citywide.
Posted by Queens Crapper at 6:48 AM

I'm confused. Isn't East New York already affordable, despite being a ghetto? So how is raising rent in the area to become "affordable" well, affordable? Once it's above that line, it's no longer affordable.

Could the mayor share that train of thought, because it makes no sense.

Forget this sideshow feud between Mayor Big Slow and Mario's Son. Stringer is the one the Blaz should worry about.