Woman sues city for allowing house to be stolen 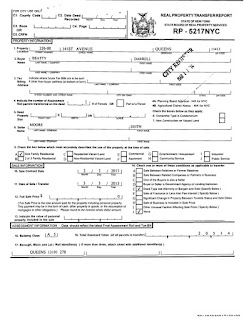 A woman whose Queens home was stolen out from under her is suing the city for allowing the theft to happen.

Jennifer Merin charges in documents filed in Queens Supreme Court that the city allowed Darrell Beatty to claim her house as his own, live there for eight months, then plunder and trash the Laurelton property.

“They know this has been a problem and have not corrected it. I was victim of the same negligence. It turned my life upside down, completely,” Merin, 72, told the Daily News.

Her suit charges that the deed Beatty submitted to the City Register in March 2014 was so sketchy it would have raised many red flags if officials had paid attention.

The deed listed an Edith Moore, who does not exist, as the transferor, papers claim. The deed also reported the sale price as $0.00.

“There was no due diligence,” Merin said.

A Law Department spokesman said recent reforms have taken place at the city’s Department of Finance.
Posted by Queens Crapper at 12:41 AM

It looks like it is time to fumigate out the career civil servants responsible for this nonsense. All of the money and compensation for the aggravation this woman had to endure should come out of their department budget or their pensions when they are fired. (Not allowed to retire/resign, FIRE THEM for incompetence!)

Normally I hate people who Sue the city since it comes out of my taxes but in this case I think the city should pay her big time. They let that jackass steal her house and then he was protected by the city's squatters rights laws as he destroyed the place.

Incompetence from the top down only breeds inefficiency, corruption and laziness! You get what you vote for or in the usual case today for what you don't vote!

Majorly incompetence on this city and yet another in a long line of inept and corrupted city agencies. The Daily News broke this story of deed fraud back in 2008 where they were able to steal the Empire State Building very easily (http://www.nydailynews.com/news/money/90-minutes-daily-news-steal-empire-state-building-article-1.353477). That was 7 years ago and they still do not have their shit together.

The city is doing everything it can to create weak communities. Good for her. Hope she can inspired others to do. You can start with the home owners in Dutch Kills that have cement from the construction, and home owners in Hunters Point with cracked walls from construction.

People frequently file "no consideration" deeds. What else about this one should have tipped off the clerk that it was fraudulent?

It's that easy? Forget renting, I'm transfering myself a new house!

"It's that easy? Forget renting, I'm transfering myself a new house!"

It's even easier to have someone falsely arrested. All an officer needs is "probable cause" "My husband threatened me with a knife". Ok - now he's under arrest. My point is simply this - people tell lies and commit crimes all the time - why should the city be held liable?

people tell lies and commit crimes all the time - why should the city be held liable?

Because unlike a "he said, she said" situation, there are City records that tell you what actually happened. The City keeps deeds, they collect taxes on real estate transactions, etc. This is not the 1400s where you can just show up and stake your claim to a piece of land and people take you at your word. If you conduct a transaction, the City gets their cut. They charge all kinds of recording fees and taxes for just that purpose. So they have a responsibility to ensure that the records are accurate, and not just take the word of someone who walks in off the street with any old piece of paper. If the City is going to leave people on their own to assert and enforce their rights in these situations, then they should get out of the real estate records business and stop charging taxes and fees relating to it.

"So they have a responsibility to ensure that the records are accurate, and not just take the word of someone who walks in off the street with any old piece of paper." OK - so what about this transaction should have been noticed? Unlike a "she said he said" situation where at lest the arresting officer can question a person, this is all on paper. If it's the right form and it's notarized correctly, a clerk cannot refuse to accept it.

She will settle after years and years of litigation and only the lawyers will win.

The woman who got scammed and we the tax payers will loose.

Yet the incompetent bureaucrats will just continue on with absolutely no penalty...

Your second comment only points out the fact that the City, which has the duty to safeguard against this type of deed fraud, did not implement the proper safeguards to ensure that their responsibility would be properly carried out. It's on paper. The trail was even easier to follow, if anyone actually bothered to look at the property records before just recording the deed.

According to the article, the person listed on the deed didn't exist and the transfer price was $0.00. The fact that the person on the deed didn't even exist should have been a red flag for someone. Sure, the clerk can accept the paper, but the people doing the recording should actually have to verify these things before they record them. As the story stated, someone once filed a fraudulent deed for the Empire State Building. The fact that the procedures in place allow someone to file something completely bogus, and that people with proper documentation are still having so much difficulty correcting the situation means that the procedures need to be reformed. This guy showed up with a fake deed and gets it recorded in no time, and then the rightful owner has to spend 8 months in court trying to get him out? The system is broken.

Too much b.s. happens in this City because nobody reads or checks forms to see if the information makes any sense. As someone who worked for NYC government for 10 years, I can tell you that it's not just these deeds. It happens way too often and it's disgusting. Demand better from your government.

Perhaps the computers were down that day.😕