Assembly Member and a consultant at the same time 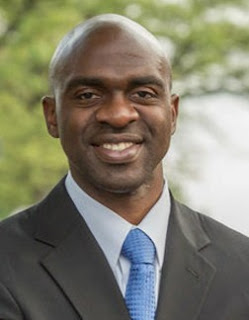 On the same day one of the most powerful lawmakers in the state was convicted of selling his office, Bronx Assemblyman Michael Blake announced he was taking a job with an influential political consulting firm.

Blake will join Hilltop Public Solutions as a partner, the firm announced in a press release Friday afternoon.

"I am excited to be joining Hilltop,” Blake said in the release, which did not mention he was an Assemblyman. “I look forward to working with the team and helping as we focus on progressive issues around the country.”

Blake, in a telephone interview, said there is no conflict of interest between his two jobs because he will work only on national and international projects for Hilltop. He said the release did not mention his role as an elected official because he wanted to make it clear the two aren't related.

"No conflict at all," said Blake who said the position was approved by the legislative ethics commission. "I understand the sensitivity," he added.
Posted by Queens Crapper at 8:02 AM

You get the government you deserve

This, ladies and gentlemen, is the very reinforcement of what GOVERNMENT TYRANNY looks like, in it's most brazen, unconscionable and openly practiced exchange---and the public be eternally damned!

Alas, if We The People continue to ignore the warning signs of an entrenched Albany, with impunity (and, likewise City Hall), then brace yourselves for an even deeper, more depraved government and societal collapse, followed by full blown pandemonium---and, ALL anarchy itself, which is currently in mid-level progress.

In New York State, corruption, graft, greed, kickbacks, payoffs and cover-ups only seem to worsen by the hour, as all pretense of public trust, integrity and FULL and non-negotiable 'taxation WITH representation' are STILL an illusion---and help by politically false, fake and failed leadership is for suckers and dreamers!

Yet, despite the entrenched political corruption, dishonesty and disloyalty, the last Almighty King of the disgraced Albany trio (Andrew Cuomo), has amazingly still clung to the illusion of his 'public service' image of monstrously failed leadership---but, for how much longer is anyone's guess---now that there is finally a new and credible pubic watchdog, target hitter at the Albany shooting range.

And, so far, our loyal and honorable man Preet Bharara is hitting the bulls eye, center target every time! Stay tuned. . .

Killer analysis again Richard, although I think you were understating the time elapsed of the moral decay of our state and city government, it's more like seconds.

It's like the proverbial doomsday clock for endemic corruption, and it's 11:59

I guess this lobbying firm doesn't have a prior convictions box on it's applications.

To say that this guy is tone deaf is an understatement. Maybe just a moron...

Why do we not call the Moreland Commission.

Oh Yes, our wonderful Governor shut it down...

So what else is new? Registered or not, we have pol's moonlighting as lobbyists.
Who is responsible for their double dipping? You, the voters who put them into office without carefully examining their background.
Most put more time in researching the next coffee brewer they plan to buy.
In any republic, you get who you elect! Remember that in November!

At the speedy rate of grinding criminal misconduct in Albany and City Hall during these treacherous, unpredictable and unstable days, ALL politicians should now be thoroughly investigated and properly vetted, one by one, because the entire political system in New York State (as is the case in every other state), is so entrenched in corruption, that to take any less action would be a dereliction of public duty itself, and worse, to continue to 'look the other way' (exactly how every other imperious politician, whom I know and met, continue to run their respective, 'friends & family,' public payroll office sites, with 'selective' and 'occasional' representation), and the same dereliction of public duty that allows every dishonest, shady politician (not public servant, mind you), continue to ignore their languishing constituents with impunity, in the first place! The system is corrupt, dysfunctional, unaccountable, secretive and broken.

Frankly, as corruption only worsens by the hour, we should really be examining why the taxpayer even needs any of these useless, vacuous, politically engineered positions at all! So, why do we need an entire city council (and council speaker, without public referendum, no less) when, for $112,000 or more for a part-time job (with extra stipends for chairing an additional committee), they don't even work demonstrably for a living (according to the needs, wants and demands of the people whom they purportedly represent), choosing instead to ignore their constituents, behave like the empowered idiots (whom they have always embodied), where lunch and a manicure is a stressful day??? And, WE pay for all of this outrageous bullshit that never ends!

Likewise, what useful purpose are all powerless borough presidents, as well as a Public Advocate, where none of these seriously vacuous, self-created posts don't have enough heft and juice to empower anyone but themselves. Millions of city tax dollars could be rescued from profligate, wanton waste and mismanagement!

But, until we start demanding our Constitutional rights and begin to organize for the sake of reclaiming, restoring and reviving our rights, liberties and all abrogated democracy itself, then expect more of the same city and state government silence and complicity---as these intensely false, fake and failed leaders continue to betray all pretense of public trust---as they devalue all honesty itself!

No wonder why so many of these vastly overpaid public fools (and their 'friends & family' public payroll, trough feeding hacks), keep demanding more obscene entitlements (that, ironically they keep getting, but never earned, much less deserve), especially given that the work itself is practically nil, while reinforcing a 'phantom,' no show payroll, as they remain forever 'missing in action,' and even harder to find than the $2,300,000,000 that virtually disappeared into thin air at the Pentagon (on September 10, 2001), under Donald Rumsfeld's derelict watch (which, incredibly, to date, no one has ever demanded, much less questioned, an accounting from Rumsfeld himself)!

And, if We The People can be so unbelievably complicit about trillions of dollars that are still missing (a staggering 14 years after the money was revealed to have disappeared), without question or Federal probe---then, get used to your local councilman (or woman, as is the case with a totally failed, unprecedented hack like Julissa Ferreras), who will surely continue to ignore your rights and queries until the end of time (or the end of your natural life span)---whichever comes first!

Shhhhh or you will be called a racist,get your mind right boy.

Reduce their authority, make them less important - the only answer.

Anonymous, kindly spare the rest of a critical audience the drama of why you are too lazy and distracted to read my posts (because no one cares), and quickly return to your Twitter account of solving the world's great disparities---140 characters at a time!

In fact, the reason why there is so much political corruption, graft and greed in New York State is because of lazy minded complainers like you, who are burdened by reading anything that is longer than a caption (with pretty pictures, naturally), but ironically, never seem to tire enough of all systemic corruption and higher taxes themselves, to take a demonstrative stand for any change to ever prevail.

Hence, don't visit your lazy mind and short attention span on anyone else in this thread, while STILL continuing to take snarky jabs at me---to obsessive effect!

And, maybe if you yourself finally had anything really meaningful to say, then you wouldn't be so preoccupied with MY First Amendment rights (and posts), which, unlike yours, are rich in cosmic portent!