Where are Brown's challengers? 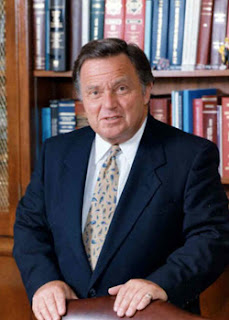 The challenger, a former state legislator threatening the party favorite, was kicked off the primary ballot in a district attorney race in Queens after a judge ruled that the signatures he had gathered were not valid. The man, seeking to beat Richard A. Brown, lost an appeal, paving the way for Mr. Brown to easily defeat a Republican in the heavily Democratic borough.

That was in 1991, and it was the last time Mr. Brown faced an opponent for the office.

Now 83, Mr. Brown has been re-elected six times, most recently in November, a victory so routine there was no public celebration. Concerns about his health — Mr. Brown has been open about his struggles with Parkinson’s disease — and rumors that his office is increasingly managed by his top associates have done little to churn up opposition.

However, in an era when criminal justice reform is an increasing part of the conversation in New York City, and district attorney seats in Brooklyn and Manhattan have turned over in recent years — or, in the case of Staten Island and the Bronx, will on Jan. 1 — some people have begun asking where Mr. Brown’s challengers are.

“He’s run a good office,” said Arnold N. Kriss, a defense lawyer and political adviser to Mr. Brown. “It’s very hard to be a candidate against a sitting district attorney when there’s nothing to run against.”

Others said his long tenure was a reminder that the city’s antiquated political machines were still a force in Queens.

“It undermines democracy when there is no real challenger to step up to run against incumbents,” said Dick Dadey, the executive director of Citizens Union, a government watchdog.
Posted by Queens Crapper at 9:19 AM

" some people have begun asking where Mr. Brown’s challengers are."
-------
A better question is where Mr. Brown is; has anyone seen him lately? does he appear at public events?

This article is a joke. All DA's in the city are re-elected with regularity.

Brooklyn had Hynes for 24 years.
Manhattan had Morgenthau for 35 years.
Bronx had Johnson for 26 years.
Staten Island had Donovan for 11 years.

Obviously The Times is looking to show Brown the door and elect someone who is more in step with their political ideology which is let the criminals go with a slap on the wrist and the hell with safety and security for the county's residents.

At least Hynes had competition. And Donovan's tenure wasn't that long. Brown needs to go.

Who should run for the position?

Someone supported by our mayor and council, that we know will prosecute NO ONE?

Careful what you ask for, remember we are heading rapidly back to what I like to call the "Dinkin's years"...

Anonymous said...
"This article is a joke."
-------
This article gives the false impression that DA Brown is fighting corruption, meanwhile, where was DA Brown during all those years when Queens politician after Queens politician was being arrested and charged with corruption? Not even one mention of the bid-rigging scandal of the Aqueduct racino? What happened to that investigation, you asked? It never showed up as a blip on DA Brown's radar--just like all the other corruption scandals taking place here in Queens. It's as if DA Brown isn't allowed to probe whoever is responsible for installing all of these corrupt Queens politicians into public office, in the first place. Cough--cough--Crowley. What? No mention of Crowley in the article? How Timesian....

If I am not mistaken most of the corrupt Queens County politicians were prosecuted by the federal government.

Keeping the seat warm until a year into his term, he calls ill health so Honest Joe Crowley can appoint his successor - an insider. You will go through an election that has as much meaning as one under Joe Stalin.

Then you never have to worry about wrong doing at the library.

D.A. Bilbo (the Hobbit) Brown will be there until he dies in office.

Hahaha and we are ready to spread this kind of "democracy" around the world.

You're gonna miss him when he's gone, folks.

You all have the answers, except the big one that I ask.

DA Brown, IMHO, is the best of the worst.

So, who is so wonderful, fulfilling all your wants and desires, and willing to run?

Everyone here loves to bitch and complain, including myself, however I would like some real, possibly electable, potential candidates.

FYI - this is how grassroots works.

Again, can someone answer my original question???

Donovan left because of fallout from the Garner trial, at least from the outcry of the injustice and not from any release of any info from the botched hearings. And also with an assist from the stupid voters into re-electing that corrupt swine Grimm who had to vacate his congressional seat from being found guilty of embezzlement, which kept it nice and plush for the D.A. to land on.

"Keeping the seat warm until a year into his term, he calls ill health so Honest Joe Crowley can appoint his successor - an insider. You will go through an election that has as much meaning as one under Joe Stalin."

Except that the Governor makes the interim appointment.

And who do you call? Ghostbusters!

Greg Lasak would be an excellent District Attorney. Top flight prosecutor and bureau chief, a tough but fair and well respected supreme court judge and a Queens guy (Molloy boy) to his core.